There is absolutely nothing “fishing” going on here since Okeechobee at all.  My boat and equipment is all down south somewhere, so I can’t even do anything with tackle right now….it kind of sucks.  We couldn’t risk bringing the camper home either because of the unpredictable weather we have in the great white north, might get trapped up here…not good.

So, I’ve been doing other productive things like article interviews, researching some of our 2013 destinations, and working on getting my garage in order.  Actually, it’s probably a good thing I don’t have my boat at home the more I think about it, because I wouldn’t get anything done.

The kids are back in school and busy, busy, busy after school on most days. They are both playing basketball at the Y and Mitchell has lots of Cub Scout things going on too.  One of the most fun and coolest things we’ve done so far (besides the Pinewood Derby car) was the cake baking challenge.  I posted several pictures of our creations on Facebook last week, so if you missed them, you can go back and check out our spaghetti and Hamburger cakes.

I was honestly dreading this deal for quite sometime, due to the fact that Anne (my wife) couldn’t assist us in any way and I’ve never baked anything…I can cook, but baking?….nope.  But I must admit, we had a blast!  Everything about the process was quite fun, from picking what kinds of cakes to try to make, to mixing, to baking, and especially the decorating.  Mitchell chose the spaghetti cake and his good friend Dakota wanted a big cake cheese burger, lol. 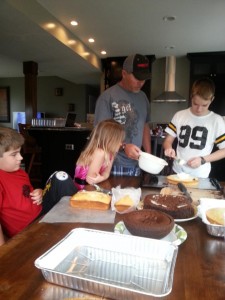 The purpose for this challenge was to raise funds for the local Scouts group by auctioning all these cakes off. There were about ten cakes and Mitchell’s Italian creation brought in the most money…a whopping $21!  Dakota’s was right behind with $16, so it was a worthwhile cause and something I’ll look forward to doing again in the future. Mitchell was awarded “The

most likely to become a chef” and Dakota got “The most colorful cake” award. I’m proud of them both!

Now, I’m getting ready to fly to Tulsa, OK for the Classic on Thursday.  I won’t be fishing unfortunately, but I will be involved in something ultra-exciting.  Rapala has a brand new line of baits coming out and we will be introducing them on Friday, February 22nd at the expo.

Unfortunately, I can’t tell you anything about what it might be, but believe me, it’s awesome, and a completely new idea. I guarantee it will raise the bar in the hard bait industry and I’m itching to cast it into the tank on Friday. I only wish I could have them for a year or so before they make them available to the world… wouldn’t that be nice?

So anyway, keep your eyeballs peeled on the 22nd, and if you’re in attendance at the Classic this weekend please stop by the Rapala booth (inside Dick’s Sporting Goods) and talk fishing and check out the new baits.

My official picks for the Classic on Grand Lake this weekend are Jason Christie, or Ott DeFoe.  Jason practically owns the lake, but told me he could struggle more than normal during this particular time of year.  I have not talked to Ott specifically about what he thinks of his chances, but…this time of year, combined with Grand’s type of lake, combined with Ott’s abilities…YIKES!…Oh and he’ll be one of the very few who will have some brand new “——–RAPS” in his boat! Good luck to all competing over the weekend.

Talk to you next week after the dust settles.  Keep up with me at my Facebook page