It was a good February for Denali pro and FLW Tour stalwart Greg Bohannan, as he accomplished all of the above at the FLW Tour kickoff event on The Big O February 6-9. We like to celebrate any time one of our staffers logs a high finish, and bringing in two bags over 23lbs while doing it is worthier than most.

Historically, Bohannan has fared pretty well on “The Big O”, taking a check in four of six previous visits. Despite that, he always failed to put all the pieces together well enough to finish in the top 10 or 20. He is pretty confident about how the lake fishes though, so prior to practice he had high hopes for the tournament.

He decided to divide his practice time between an area on the north shore near the famed “Monkey Box” and a large portion of the west wall. Bohannan had a pretty good practice overall, saying “I found a good area up north where I caught a couple good ones on a spinnerbait and then had an area on the west wall where there were just hundreds of beds. Each one had a male on it, and although I didn’t catch any good ones in there, I knew that the females would be moving up sooner or later.

The first day of the tournament brought a fog delay and overcast conditions with a slight ripple on the water – Perfect spinnerbait conditions. Bohannan was ecstatic as he raced to his north shore spot, but when he got there things were a little off. “I don’t know what it was, with those conditions, I was certain I was going to go up there and bust a big sack.”

Unfortunately, that didn’t work out and by 11:30 he was struggling with only a single 12″ keeper in the boat. At that point, Bohannan decided to bail and run down to his spot on the west wall and try to salvage a limit. “I knew I could go down there and twitch a fluke into holes in the grass to catch a limit, which at that point was desperately needed.”

His prediction proved accurate, and within a half hour of fishing at his second spot, he had a small limit. At that point, there were only a couple hours in the day left, and he was starting to get a little worried since a small limit isn’t really worth much on a lake like Okeechobee.

He decided to pick up a swimbait and start burning it over the grass and was immediately rewarded with a six pound fish. “At that point, the light bulb went on and it was on. I caught two more fives, a seven, and a four plus pound fish in the next 45 minutes. It was amazing; the fish were just on fire in that area.”

That flurry allowed Bohannan to cull up to his 27-02, career best stringer. 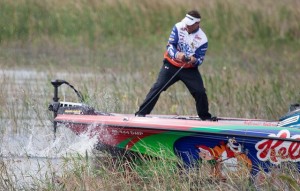 Unfortunately for Bohannan, there are no secrets at tour level events. Several anglers had been fishing in the area where he caught his big stringer on day one, and despite devoting all of day two to the spot, the bite was much tougher. “I went back there on day two and spent the entire day in there. With all the boat traffic and other anglers chopping the water up, it became much more difficult to get bit.”

Bohannan knew however that he would only need to catch about 10 pounds to make the cut, and he was still able to do that despite not getting any big bites the second day. “The fish were just slapping at it the second day and I think it was due to all the boat pressure and commotion. I was able to get what I needed, and figured it would get better again after the field got cut down.”

It turned out that the second day was tougher on a lot of the field, as his meager 13-11 limit only dropped him to fifth place going into day three.

With a lot less boat traffic on day three, Bohannan had high hopes that the fish would be biting and he would be able to mount a charge up the leaderboard. “The day was cloudy, and I figured with most of the field gone that it would get pretty good again. Pretty early my co-angler caught a four and an eight, and that gave me the confidence to stick with the swimbait all day and catch another decent limit. I actually lost a couple on day three that would have helped, but overall it was another pretty good day.”

Bohannan’s better day three kept him in 5th place but still a remarkable 15 plus pounds behind leader and eventual winner Brett Hite.

Going into day four, Bohannan was in great spirits. He was catching the snot out of big fish, had already made the cut into Sunday, and was far enough back that he was able to maintain his calm and fish relaxed. That doesn’t mean he thought he was out of it though. “I was actually really confident on the morning of day four. I knew that Brett had a big lead, and it would probably take a 30 pound sack to even have a chance, but Okeechobee is the kind of lake to do it and I knew that there was still some big fish around my area.”

His confidence proved pretty unfounded for the first hour as he didn’t even move a single fish throwing the same swimbait he had been catching them on all week. “I saw that the weather had caused the water temp to drop about four degrees, which is a lot in Florida. I started out throwing that Big EZ around again and it was like the whole place was dead for the first hour.”

After getting nothing on the swimbait, Bohannan decided to try something he hadn’t done yet in the tournament, and started flipping some nearby reed clumps. “I noticed that all the boat traffic had chopped up weeds and they were starting to form mats around the  reed clumps. I don’t really know why, but I decided to go over there and start flipping them, which turned out to be a good decision. I caught a six and a four in about 10 minutes, which gave me a lot of confidence and relaxed my nerves.”

After scoring a couple big fish flipping, the sun came out and Bohannan noticed the water temperature was warming, which led him to go back to throwing the swimbait. After boating a couple smaller fish, he quickly experienced another flurry that brought in three five pounders in about 30 minutes, good enough to cull up to his 23-07 ending weight, which was the biggest bag of the day. “It seemed like every day except for day two there was a little flurry where the big ones would bite, and that last day was just awesome to catch those fish with a cameraman in the boat and everything.”

Bohannan was thrilled to find out at weigh-in that he had climbed all the way up to second place and earned a check for $30,000. *Note: As it turned out, Bohannan’s prediction was accurate. A 30 pound sack would have given him the victory by 4 ounces.

Although Bohannan caught a couple fish on a fluke and a spinnerbait, every single one he weighed in was caught either on a swimbait or flipping.

7’9″ XH Denali Kovert Flipping Rod, Ardent Apex Elite casting reel (7.3:1 ratio), 65-pound Sufix 832 braided fishing line, 1-oz. unnamed tungsten weight, 4/0 VMC Heavy Duty flipping hook, Missile Baits D-Bomb (bruiser flash).About the gear, Bohannan thinks that without a doubt the most important piece of equipment he used all week was the Kovert flipping rod, saying “That thing was definitely the biggest key to my success. I was catching fish in some pretty thick stuff, and to be able to pull a five or six pound fish wrapped up in a pile of grass back to the boat is amazing. There were times I was pulling so hard on the rod that I was absolutely sure it was going to break, but it didn’t. It’s super important to get a fish’s head up and moving toward you every time you are fishing in thick grass. That Kovert rod made it extremely easy to do that.”

Another key was the big profile of the Gambler Big EZ, something that Bohannan thought did a great job of emulating a tilapia. “There were a ton of tilapia in there spawning right with the bass. I’m pretty sure that’s what the females were keying on. You could catch the snot out of them with a fluke or a buzz toad, but I was running that big swimbait over their heads and it triggered the bigger bites. That’s the thing that I think really separated me from the other anglers in my area.”

Bohannan is really pumped about what this strong performance provides for the rest of the season, saying “It’s a lot easier to fish when you are sitting in decent shape in the AOY race. I really want to make the championship this season, and it’s no fun to be scratching and clawing at the end of the year. I didn’t win anything yet, but I feel great and can’t wait to get back out there.”