Let me start by saying that my Saturday Scorecard rating for the BASS Elite Series tournament at Falcon Lake is 30, which is a better score than after the Sabine River (27) – but not as good as it was at the Classic (35). At Falcon, I docked myself in two critical ratings areas: “decision-making” and “focus and composure.”

Before I get back to the Scorecard, I should tell you what happened during the first hour of the Falcon tournament and you’ll get a feel for why I rated myself so low in those two areas. I still can’t believe what I did.

When I started the first day, I had two main areas to fish. I had found real good fish down by the dam, but I thought that even though those fish can be big, catching them might be a long shot. Also, the boat run to the dam was time-consuming. My second area was in a creek where I knew there were some big ones, but probably not as big or as many as at the dam. I was also pretty sure I could catch a limit in the creek, though, so that seemed to be a good bet to start there on the first day. I figured: Go get the limit, maybe catch a big one or two – then go to the dam after the area starts to play out.

So I went to the creek, and not surprisingly, there were a bunch of boats there. Plenty of other guys also found the creek. That’s not unusual, because if there’s a bass swimming, these Elite Series guys are going to find that bass. But since it was Day 1, it was my water as much as anybody else’s.

I started out in an area that I shared with Ish Monroe. I was throwing a light spinnerbait, while Ish was pitching a jig, which I thought was wrong. He wasn’t going to have any luck – or so I thought.

Ish and I started separate ends of about a hundred-yard stretch. We fished toward each other, met in the middle and then kept on going. But right after Ish passed by me going other way, he caught a NINE-pounder. He wasn’t a boat length past me, and he caught a nine-pounder in water I had just fished. That kind of sucked.

After making that first 100-yard pass, I decided to go with a heavier spinnerbait. I got out a piece of bait I had built the night before. I’ll add that I spent a long time making that bait. It was designed to be my all-day heavy spinnerbait. And it needed to be all day, because I didn’t have backup.

About the time I stopped fishing in order to tie on the heavier spinnerbait, I looked up and saw Ish pulling in a SEVEN-pounder. On my water! Ish has got 16 pounds, and I haven’t had a nibble. So now I’m thinking I need to hurry. I start tying on my home-made spinnerbait. So stay with me here on what happens next. … The next thing I did was something I’ve done 50,000 times.

I tied my heavy bait onto the my line, then tossed the bait in the water to straighten out the excess line. The problem was that I had cut off about a four-feet tag line. Instead of dropping all the tag line in the floor, some of that line fell on the deck in front of me.

So in those 50,000 times I’ve tied bait onto my line, I’d never tied the bait onto the tag line instead of my main line – until Thursday morning, that is. So when I tossed the spinnerbait into water, I watched it stay on the surface for a second, then start to sink, pulling the four-foot tag line down with it to the bottom of Falcon Lake.

My marshal looked over the side of the boat and said, “Wow. I’ve never seen anybody use expensive spinnerbait as chum.” 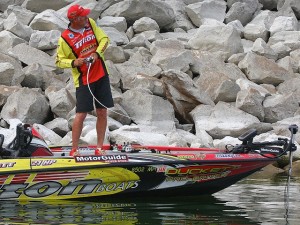 Yes. It was that kind of day. A horrible, horrible Thursday.

I can sum up the rest of the tournament in about two sentences. I recovered slightly on Thursday and caught a little over 13 pounds, which was good for 78th place. On Friday and Saturday, I went to the dam, caught really big bags and moved up to 35th place.

If you haven’t seen one of these Saturday Scorecard columns, I use a 1-10 points scale (10 being the best) to rate my tournament performance in five areas: Finish Position, Decision-making, Focus and Composure, Preparation and Practice. Here’s how the Falcon Scorecard played out:

DECISION-MAKING – Scorecard Rating: 6
Ish told me later that after he caught those two game-changer fish, he didn’t get another bite until around noon. To me, early Thursday it looked like I didn’t have the right bait and there were boats everywhere, so I had to go into survival mode. I cranked up and left the creek, but I didn’t want to risk going all the way to the dam, so Thursday became one of those days where I just had to get something to put in the boat. As I said, it was a bad Thursday. But I scrambled, and made up for it as much as I could on Friday and Saturday. I had two of the top bags in the field, but I couldn’t overcome 13 pounds on the first day.

I should mention there that Falcon wasn’t the typical Falcon. It was good, but what might have be a 40-pound on other weeks was a 30-pound bag during this tournament.
Overall, I thought my decision-making was ok. The execution wasn’t good on Thursday, though.

FOCUS AND COMPOSURE – Scorecard Rating: 3
I let what was happening around me on Thursday get in my head. I got rattled, and if you’re going to be successful, you can’t afford for that to happen. I was so disappointed in my performance on Thursday that I gave myself a three.

On the positive side, in 2011 and maybe 2012, I would have finished the tournament in 90th place instead of 35th. I would have started “swinging for the fences” and over-compensating. And, I assure you, that wouldn’t have been smart. I didn’t do that at Falcon. I didn’t press on Friday and Saturday, and I listened to the fish.

PREPARATION – Scorecard Rating: 8
Because of my business schedule, I don’t get many chances to pre-fish, and I didn’t pre-fish here. But I did a lot of research and listened to what people had to say. I learned plenty.

PRACTICE – Scorecard Rating: 7
I had decent practices. I hit what I needed to hit and didn’t miss anything that I know of. After doing all that, I only came away with

two areas that I knew were solid.
I should mention that we shouldn’t confuse having a good practice with finding fish during practice. They’re not the same things. Sometimes you actually get lucky and happen up on them. The way I’m rating this section has to do with whether I spend time 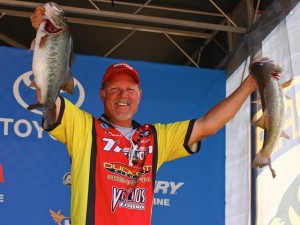 wisely, cover as much territory as possible and get useful knowledge.
It was a good practice. Not great, but good.

I’d like to mention that I like what BASS is doing with site selections. It’s good to go to Falcon and see guys smash them, but I like some of the choices that BASS has made recently. The Sabine River was a challenge it was good for people to see us struggle to find fish.

We’ve had other new and tougher-than-normal venues in the past few years. I like it.