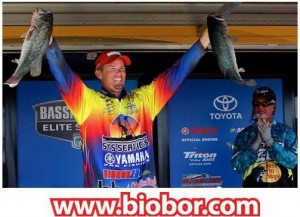 His win also gets him into the exclusive Century Club (+100lb total weight), an automatic berth in the 2014 Bassmaster Classic and 100 points in the 2013 Toyota Bassmaster Angler of the Year race, which will award the winner with $100,000 after the eight-event season.

The 2nd and 3rd place anglers, Rick Clunn and John Crews brought in over 100 lbs of fish each to join Combs in the Century Club. Clunn trailed Combs by only a pound after 3 days, making the competition a close one. Clunn ended with a total weight of 105.6 and Crews with a weight of 103.13.

BIOBOR® Fuel Additives is a proud sponsor of all three of these fine anglers, and we want to wish them luck in their quest for the Angler of the Year Trophy.