Dyanamic – Windshields and Bugs at Seminole

Tommy Biffle stepped off the weigh-in stage Friday afternoon at the Bassmaster Elite on Lake Seminole feeling like the victim of lyrics found in George Jones’ legendary 1980 country classic.

After catching 23-pounds the first day, and vaulting him to the Top 10 on the leaderboard, it was as though these southwest Georgia waters had suddenly stopped loving Biffle — leaving the Oklahoma pro with a pale 6-pounds on Day Two, and sending him plummeting down the leaderboard.

By no means was Biffle alone in a feeling of love gone wrong.  Shaw Grigsby caught a mind-boggling 30-pound limit on Day One to take the lead, only to catch 12-pounds on Day Two. Local favorite and well-liked JTodd Tucker, who has been fishing Seminole since kindergarten, only managed 8-pounds yesterday after a very respectable 18-pound limit to end the first day of competition. 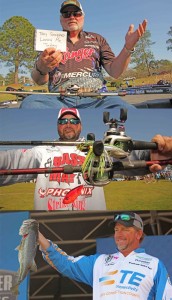 This tournament has been the ultimate scenario of sometimes you’re the windshield, and sometimes you’re the bug, and the worst part is, it’s hard for the best anglers in the world to fully understand why. “I’ll be honest, I’m not fishing like I like to fish, what I’m doing out there isn’t really my style, I’m casting a worm around, but on the first day of the tournament I got three really big bites doing it, and on the second day, I just never got a single big bite,” said Biffle. “I think on Saturday I may just grab a flippin’ stick and go fish the way I like to.”

“Thursday was one of four days in my 30 years as a pro that I’ve caught a 30-pound limit, so I didn’t think I could repeat it,” admitted Grigsby. “But I’ll go out there Saturday and do my best to catch another 30-pound bag. I’m just blessed to be a professional angler.”

Being a professional angler is certainly enviable to many, but for those who play the game, it’s a never-ending emotional roller coaster. Greg Hackney’s amusement park ride soared upward on Day Two with a 23-pound limit Friday after a dismal Day One that netted him just 5 total pounds. “I fished the same stuff Friday that I did on Thursday, but with far less wind, I was able to fish a whole lot slower,” explained Hackney, who’s paying less attention to spawning bass than many of his competitors, and instead, winding a Strike King Rage Blade and a Red Eye Shad on a large spooled Quantum EXO 200 reels.

JTodd Tucker knows better than anybody that this lake can quickly give back in the same way that it takes away. And so over a hamburger steak covered in brown gravy and grilled onions at Big Jim’s Oyster Bar on Friday evening, the local pro spoke with soft tones of wisdom rich optimism for Saturday. “Dad and I have never ever just gone out and tried to catch a 12 or 14-pound limit on this lake the entire time I’ve lived here because we know how many 25 and 30 pound limits swim here,” he explained.

It’s a go big or go home mentality here at Seminole. Be the windshield or be the bug. But heed the humility and wisdom of Greg Hackney even after he weighed-in 23 pounds Friday. “If you don’t get humbled in this profession, you just ain’t played the game very long, ‘cause trust me, the bass don’t care one bit about your emotions.”