There a lot of things Terry “Big Show” Scroggins does well. Catching bass being at the top of the list — as proven by his current second overall position in the Toyota Trucks Bassmaster Angler of the Year. 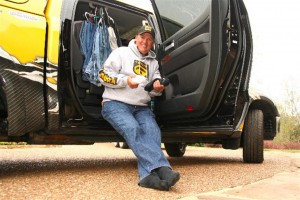 But a well organized packer for long road trips … not so much. The back of Big Show’s truck looks like a tackle store and a home improvement center got in a fight that nobody won.

Move inside the cab of Big Show’s Tundra. It’s a sure bet nobody at Toyota Trucks was thinking about sock drawers when they designed the interior storage on their door panels, but Scroggins is highly appreciative of the way they turned out.

“I got to thinkin’ about how many weeks I’d be gone — my duffle bag was already full of underwear — so I thought ‘well, either I gotta wear flip-flops the whole time I’m gone or find a place to put my socks,’” grinned Scroggins. “I got to lookin’ around and thought ‘man Toyota was thinkin’ ahead – they built lots of storage into these door panels …I can stuff all kinds of socks in there,’” he concluded.

It doesn’t end with articles of clothing. Scroggins’ unorthodox packing parlays into outboard motor prop storage too. An old pair of blue jeans is wrapped around a spare prop. “I got to thinkin’ – heck, Levi’s are pretty tough, they should work good for a prop cover,” he reasoned.

And instead of a tackle tray, a five-gallon bucket holds handfuls of deep diving Bomber crankbaits. “It’s water proof so your treble hooks never rust, and it floats – I just take a few out as I need them,” he said.

You might be worried that Scroggins is some sort of train wreck. Don’t worry. Worry isn’t something Scroggins is good at either. He doesn’t get paid to worry. He gets paid to catch fish. And with Top 10 finishes in three out of four Bassmaster Elite Series events so far this season, it’s hard to argue that however Scroggins chooses to pack for the road is working out just fine on the water.