One of bass fishing’s most electric personalities sits in the driver’s seat of his Toyota Tundra Double Cab, glances at the 89,156 miles on the odometer, and begins to calmly reflect.

Eighty-nine thousand one hundred and fifty-six is more than a number. It’s evidence of a career and a life lived largely away from home – distant from two souls Mike loves so much, Drew and Rylie, daughters from his first marriage. They have school to attend and field hockey games to play while dad is on the road playing a crazy game called professional bass fishing. 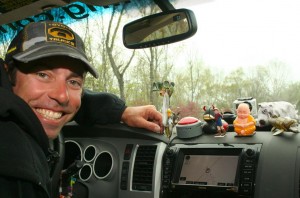 Luckily, Iaconelli has Becky, his wife, best friend and business partner as a constant traveling companion. Plus, in recent weeks, brand new baby Vegas Iaconelli has been riding along across America too with mom and dad. Chances are, Vegas will see more of America before he’s done gumming macaroni noodles than most folks encounter in a lifetime.

“This truck carries my wife, my baby, serves as a work vehicle, and a tackle room; it’s our home away from home, and eighty-nine thousand miles in just two years of driving proves it,” says the 2006 Toyota Tundra Bassmaster Angler of the Year.

Iaconelli’s eyes glance away from the odometer, upward to where an eclectic assembly of small animals and action figures sits. He begins to grin. “I’ve got Walter the dog, and then there’s the Serenity Buddha, Becky bought me that as a calming device – because as everybody knows, I get fired up pretty easily,” he laughs. “She also got me Devil Duck. She says it fits me perfectly because rubber ducks are cute, but this one has a fiery exterior.” “And when a big 18-wheeler cuts us off in heavy traffic – hey, I just reach up and slap the big red button – that helps calm me down too,” he grins.

“I’ve carried stuff like this with me throughout my career. This is not a new project — it’s a family project. Drew got me the plastic prehistoric mudfish, and she and Rylie recently got me the statue of the man with a stringer full of what I’m calling warmouth sunfish,” he says, in a way that indicates his creative mind won’t allow the critters on the stringer to simply be called fish, but instead warmouth.

What some might call dash trash, Iaconelli calls a feeling of home – a reason to grin and feel at peace. A chance to feel a little closer to what is missed most during 89,156 miles – and many more to come.