Since missing the PAA Lanier tournament, I’ve basically had a week off to twittle my thumbs, lol. I took the kids out crappie fishing a couple times, once on Lake Edinboro and the other on Presque Isle Bay. We caught a few both times, the last time Mitchell put a serious beat down on me and Macy…he was on fire! I don’t have the little boat ready to fish yet so we took the Frosted Flakes Ranger out, what a fiasco, everywhere we go somebody follows us…I hate that.

It’s been mostly cold here during the last week, but yesterday it hit 68 degrees with thunderstorms and big wind. I spent the day in the garage and boat trying to get re-organized after making a mess at Hartwell. I spent a lot of time going through my map collection and trying to make sense of it all. I’ve compiled an insane number of lake maps over the years and I have several copies of many of them. That happens when I forget a map and have to buy another one and also some lakes have 2 or 3 different types of maps. I forget to bring maps to events all the time, I have 5 sets of Champlain maps, 3 to a set…ha ha!

Anne and the kids may be staying home again from the next tournament at Chickamauga, TN. Her Mom is having a difficult time which is totally understandable; she needs her only daughter around right now. We are planning on hooking up either in Texas for the PAA All-Stars event on Lake Ray Hubbard, or the FLW Tour Major on Table Rock Lake, not sure yet. It’s tough not having them with me on the road and it really makes me appreciate the sacrifices so many of the other guys make to play this game. This life can be tough on families for sure.

I guess the BASS Elite Series event starts on Pickwick tomorrow (Wednesday). I’ll probably watch the live weigh-ins since I’m an “all things bass” addict. They should whack them there with the water up in the bushes this time of year. I’ve been having some fun texting Dave Mercer (the emcee) some one-liners to say on stage. One of my quotes made the show and all the highlight films… “Geepers creepers look at the peepers on them swamp donkeys!” Did you hear that one? LOL. Check out my Facebook page to see what I give Mercer this week. 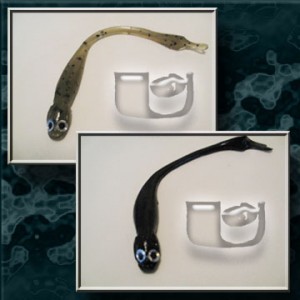 Also, TABU Tackle is introducing two new colors in the Whip Tail Worm, black and green pumpkin. They will available at Tabutackle.com tomorrow!

Well I’m heading out to the garage to get some work done for now, first I need to put my ice fishing hut away. I’m planning on leaving on Friday so not much more time. Our official practice starts on Sunday and I can’t wait to get on the water. I’ve never been to the Chick before but have heard a lot of great things about it.

Talk to you next week after practice!