Make no mistake; bold amounts of tenacious competitiveness exist between Bassmaster Elite Series pros. Still, itâ€™s a game played in deep pools of humility with fellowship often floating to the surface even on the first morning of the tournament.

Indeed, fellowship floated freely at sunrise this morning between Davy Hite and Kevin VanDam inside the small harbor where morning take-off is staged along the north bank of the Arkansas River in the heart of downtown Little Rock. 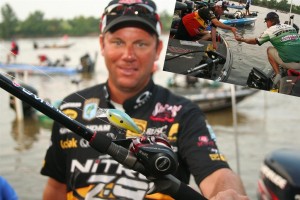 As boat numbers were called-out, Hite asked VanDam what size of replacement treble hooks he liked best on his namesake Strike King KVD 1.5 crankbait. VanDam advised a larger size than what Hite had obviously put on his lures and could tell Hite felt immediately disadvantaged.

Rather than ride off into the sunrise, leaving Hite restless with the wrong hooks, VanDam turned to Davy and said, â€œHand them here, Davy. Iâ€™ll change them back to the right size for you.â€ Hite obliged and handed over his lures sporting incorrect hook sizes. KVD broke out the split-ring pliers and correctly sized Mustad replacement trebles, and in classic blazing fast VanDam fashion made all things good again with Davyâ€™s lures in time for take-off.

Even after nearly 10 years as his roommate, Hite couldnâ€™t help but talk about Kevinâ€™s admirable character. â€œIâ€™ve said it a million times, for the success that heâ€™s had, itâ€™s amazing how helpful and humble Kevin is. Sure weâ€™re close friends, but he didnâ€™t have to help me like that. Heâ€™s just so dang quick at changing out hooks, there was no logic in telling him Iâ€™d do it myself. His parents obviously raised him to be the high-character man that he is, and his wife makes sure he stays that way,â€ said Hite, who has added a pile of BoatUS Angler â€œWeigh-to-Winâ€ cash and Toyota Bonus Bucks to his admirable earnings this season.

Also just before Day 1 blast-off, along with making sure Hite had the right hooks; VanDam was proudly showing off what he considers to be the right reel. Kevin has been working for months with his career-long reel sponsor Quantum to design a special lighter bodied 5.3:1 ratio reel specially suited to the cranking system heâ€™s used to win his two most recent Bassmaster Classic and Angler of the Year titles.

â€œBased on the success of the Smoke series of reels, I asked Quantum to build me a reel styled similar to that frame with the 5.3:1 ratio I love. They nailed it. Itâ€™s a really low profile, significantly lighter reel weâ€™re calling the Tour KVD Cranking Classic. It has the super smooth Performance Tuned 150-size gears in it. Weâ€™re officially launching it at the ICAST trade show next month. Plus, we put smaller guides and a smaller foregrip on my cranking rods to make them lighter too,â€ said an obviously proud, and according to Davy Hite, an always generous VanDam.