Go Lucky and Find ’em with Squarebills and Justin Lucas 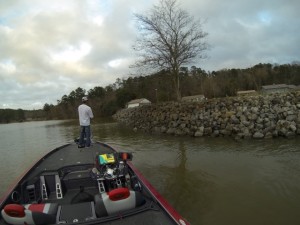 2014 Bassmaster Elite Series Rookie Justin Lucas came from California where finding bass can be a time labored experience; especially in cold water.  On many of the West’s bodies of water, the high level of visibility, couple with the colder temperatures can mean bass are often deep.

As a tournament angler, things that take a long time to develop can be a very negative thing; especially when it comes to locating bass.  When you are given three days or less to find the kind of fish you can be competitive with; you typically prefer to avoid long, lengthy searches.  When Lucas moved East and started competing, he needed things that provided him a much more rapid response.

As with many professional, Lucas tends to turn towards horizontally moving lures.  He has his personal favorites, but in the late winter to early prespawn, he tends to turn to a Lucky Craft Squarebill crankbait.

“I always try to find fish on a reaction bait, and when the water is cold, a squarebill is the best choice,” said Lucas.  “I try to find a certain type of water and cover mixture and let the lure help me find fish that will respond in cooler water. The Lucky Craft RTO LC1.5 has been my favorite for years; even before I was a part of the Lucky Craft team.”

What is Squarebill Water?

Lucas said the first thing he looks for is water that has a little color to it.  The reason is because water with silt particles in it tends to warm up faster than clear water.   He also likes cover present.  “I really prefer sections of rip rap and rocky banks,” he said.  “They tend to hold warmth more, have a little deeper water around them, and usually a few bass.”  He typically finds this combination around causeways and bridges and around points near channel bends. 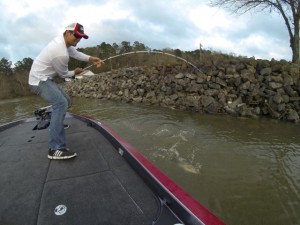 While he would prefer to fish around rocky cover, his secondary preference would be stumps and laydown wood along flats leading into spawning areas.  “The big thing about any area that I’m going to fish is that there has to be some deep water nearby,” he said.  “I really start looking just inside the creeks and work my way back until I come into contact with bass.”

He also said he pays close attention to the water temperatures.  “The surface temps tell me when bass will be active, and what type of retrieve to start with,” he said.  “In the low to mid 50’s I go with a medium retrieve, but I start to speed it up as it gets into the mid to upper 50’s – those are the prime times for the LC1.5.”

Squarebills and Squarebill Gear
Lucas said that he prefers to pick from Lucky Craft’s shad colors when fishing with squarebills; especially in the colder water periods.  “For the most part, in much of the country, bass seem to be really keyed into shad, so I pick shad colors mostly,” he said.  “I base my choices on water clarity and sky conditions.” 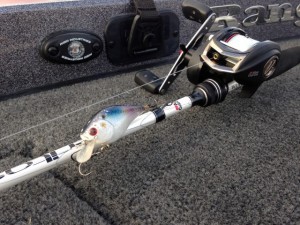 When it comes equipment, Lucas prefers rods that allow him to make precise casts around cover, yet have a moderate, parabolic bend that help keep pressure on the fish during a fight.  With that in mind, he chooses a 7′ medium action Abu Garcia Veritas Winch rod matched with an Abu Garcia Revo SX reel in 6.4:1 retrieve speed.  He spools his reels with 12 to 17-pound-test Berkley Trilene 100% Fluorocarbon line.

He makes one modification to his lures; which is to upgrade his treble hooks.  Because he tends to use heavier line in this application, he upgrades to the Owner ST-41 black nickel trebles.  He said that they are made from a heavier wire, and have a little bit larger gap which helps put pressure on fish and move them away from cover.

Squarebill Dance
The Guntersville, Ala. pro said that he really tries to make the lure contact the cover as much as he can.  Because he is dealing with dirtier water, he doesn’t have to stay long distances from the fish, and can make short, precise casts to cover.

“You don’t really want to be making long casts with a squarebill,” said Lucas.  “Because you are throwing around targets, you want to make casts that are short; say from 10 to 20 yards at the most.  If you make a long cast and have multiple pieces of cover between you, there is a chance you will spook other fish, or lose the one you’ve hooked in another piece of cover; you really want to work one piece of cover at a time.”  He did say the once exception is rip rap, he suggested making longer casts parallel to it.”

As far as the retrieve, he touched on a using a medium retrieve in the colder temperatures, and a faster one in the higher temperatures of the range.  However, he wanted to also make sure anglers know to power the bait through cover.  “The bills on the LC1.5 do a great job of deflecting off of cover; so, run into it,” he said.  “Bounce it off of rocks and stumps, deflect it off of limbs, but keep it moving, that is when strikes occur.”

He said that the natural movement of the lure as it bounces off of targets will create the erratic retrieve needed.  “Pauses will come as the lure comes through obstructions,” he said.  “There is no need to pause and let the lure settle, it will take care of that for you while you retrieve.” 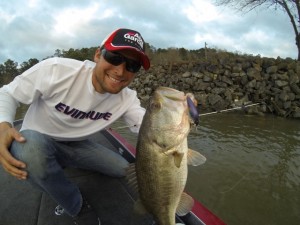 Final Thoughts
Lucas said that he sticks to the LC1.5 for the vast majority of his squarebill fishing.  However, he does bring a few LC2.5 versions with him when he goes to lakes like Guntersville, Falcon, or The California Delta and Clear Lake.  His reasoning is the size of the fish can be bigger and a bigger meal might appeal to them more.

Although he was quick to point out that he has caught a lot of true heavyweights on the smaller version.  “Man, it’s a lure that I always have tied on,” he said.  “It has played a big part in a lot of checks I’ve cashed on tour.  It may not always be the only thing I’m using, but the LC 1.5 has sure filled a lot of limits, and produced a lot of kicker fish for me when I’ve needed them.

“It is my go to crankbait for shallow water, but it is in its prime time from late winter through the postspawn, and I can’t wait to get out there and grind it through cover.”