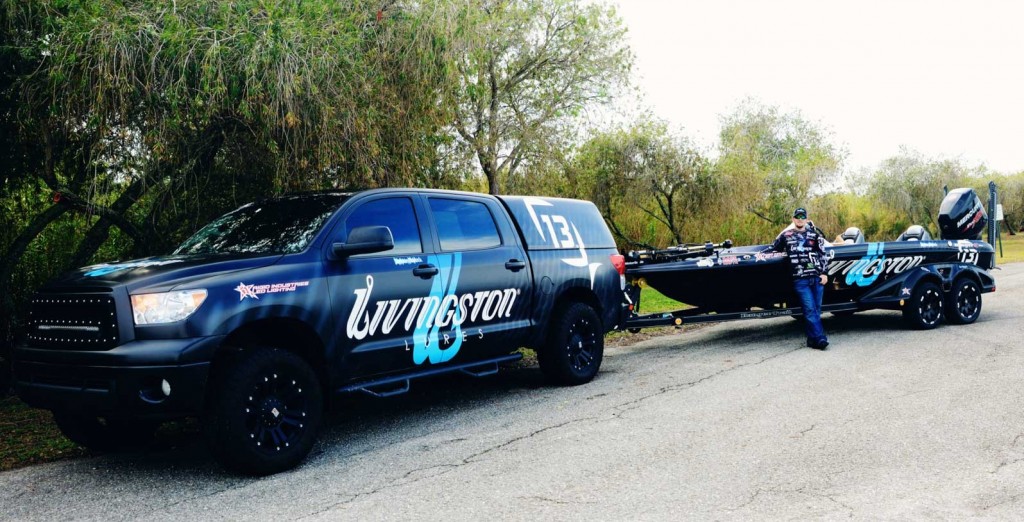 Benton, Ark – On the heels of his 2013 FLW Tour AOY runner up season, Stetson Blaylock and Livingston Lures have strengthened their relationship for 2014. Blaylock’s boat and truck wrap will feature Livingston Lures and 13 Fishing.

Blaylock, entering his sixth year as a professional angler, has won over $650,000 with FLW Outdoors.  Blaylock joined the Livingston Lures team in 2013 and quickly saw the advantages in their products, “From the first fish, I knew the technology in these baits gave me an advantage over other lures. It didn’t take long for me to develop confidence in Livingston Lures. The new lineup for 2014 is shaping up very well, I know it’s going to make a difference for me this season.”

Basil Battah, COO of Livingston Lures, expects a big year for Blaylock in 2014, “Stetson is an excellent angler and we are proud to be giving him tools that will help him continue to escalate his career. We share a lot of values with Stetson that go well beyond the water: he’s a family man, works hard, and believes in using the best equipment on the market.”

About Livingston Lures: Livingston Lures has built a reputation among top freshwater and saltwater anglers for premium quality baits that flat-–out catch fish. Their hard plastic lures are designed to call the fish using Electronic Baitfish Sound and Vibration Technology (EBS). Livingston Lures prides itself in providing the highest technologically advanced products to anglers at an affordable price.www.LivingstonLures.com