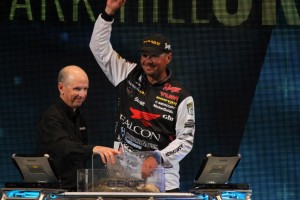 TULSA, Okla. — The bass on Grand Lake O’ the Cherokees are in transition, and all of the 55 anglers in the GEICO Bassmaster Classic presented by GoPro are doing a decent job staying ahead of them.

But on Friday, one angler — a local favorite who lives right down the road — did it better than anyone else.

Jason Christie, a Park Hill, Okla., pro who lives just an hour away from the lake, brought five bass to the scales that weighed 20 pounds, 14 ounces and took the opening-round lead in the Super Bowl of professional bass fishing. Alabamian Greg Vinson, who almost missed the event due to the lingering effects of a concussion, is second with 18-1, and Texas pro Alton Jones is third with 17-13.

Even after a big day, Christie admitted the fishing was tough.

“It was slow. It was a grind, but it was a grind in practice,” Christie said. “I honestly didn’t think I had that kind of weight, but the fish up here just fool you because they’re thick and heavy.

“I’m not getting a lot of bites. I think the most I’ve had in one day is nine — and that’s including practice.”

Getting just nine bites during an eight-hour day forces an angler to exercise patience and remain focused through the down time so he doesn’t miss the next bite when it finally comes.

Being a local favorite, Christie wasn’t surprised that he drew a large gallery of spectators Friday. He hoped to feed off the energy of the home crowd, but he said all of the down time made it tough to do that.

“I’m committed to what I’m doing,” said Christie, who wouldn’t expound on the tactics he’s using this early in the tournament. “I’m going to stick with it and either go down in flames or do well. I’ve just got so much confidence in the way I’m fishing. I may only catch three tomorrow, but they might weigh 16 pounds — and the potential for a really big bag is there.”

Vinson, who suffered a concussion after an unexplained fainting spell in a Montgomery, Ala., movie theatre Feb. 20, rebounded nicely with his catch of 18-1.

“I think it might have knocked a little sense into me,” Vinson said, laughing. “The first day of practice this week was really important to me, because it was the first day I had been on the water since the little episode. Just to be able to fish all day fluidly and feel like I was thinking clearly and making good decisions — that was big for me.”

It was during that early practice period when Vinson developed the pattern that vaulted him into second place. He said he fished all day Friday without seeing another angler.

“I didn’t feel like I would catch them in the exact same spots where I caught them in practice,” he said. “But I felt like, if I stuck with that type of pattern, I would eventually be able to get the bites.

“I had to run a lot of stuff today, but I hit two little flurries when they were right.”
Best of all, Vinson felt good physically.

“I finally feel normal,” he said. “To start with, I still had some headaches. But after the second day of practice, I really started to feel like myself again — and I’m OK now.”

Jones, who already owns a Classic trophy for his 2008 win on South Carolina’s Lake Hartwell, said his good opening round was a result of a good choice he made prior to competition.

“I made a decision in practice, with this warm-up that was coming, I was going to fish where the fish were coming to,” he said. “There were a few of them already in there in practice, and I felt like I knew where they would be setting up when the tournament started.

“It was sort of an educated guess as to where the fish were going, and it worked out well for me today.”

The tournament will resume Saturday, with a full field of a 55 anglers leaving Hard Rock Dock at Wolf Creek Park at Grove, Okla., at 7 a.m. The weigh-in is set to begin at 3:15 p.m. at the BOK Center in Tulsa.

The field will be trimmed to the Top 25 for Sunday’s championship round, with the winning angler claiming a $300,000 prize.

Christie will receive $1,000 as winner of the GEICO Everyday Leader Award for leading the first round; an additional $1,500 was awarded to Christie for having a GEICO decal on his boat’s windshield.