Itâ€™s 4:52 a.m., and Shaw Grigsbyâ€™s headlights are among the first to shed light on the day weâ€™ve all been waiting for — Day 1 of the 2012 Bassmaster Classic. He exits a downtown Shreveport hotel parking lot, hooks a left on to Market Street, and begins a 12-mile drive south to the launch.

A wooden cross hangs on his rear view mirror, and remnants of a 32-ounce sweet tea he accidentally spilled in the cab of his truck this past Tuesday hang around on the carpet fibers beneath his feet. This is Grigsbyâ€™s 14th Bassmaster Classic, and still he admits heâ€™s jittery to the point of scatterbrained here in the pre-dawn of a cold, windy and cloudy Day 1.

â€œI donâ€™t think the Classic ever gets old,â€ says Grigsby. â€œItâ€™s your drive, your motivation. Every Elite Series event I fish, Iâ€™m thinking about doing well enough by seasonâ€™s end to qualify for the Classic. â€ 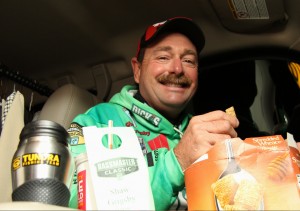 Thereâ€™s a reason he was one of the first competitors out of the hotel parking lot this morning. Grigsbyâ€™s been a full time pro for 27 years, and heâ€™s celebrated 55 birthdays. And as he exits on to Highway 71, he admits that all the lonely early morning miles and birthdays have led to a need for more prep time.

â€œEvery year that passes makes organizational challenges a bigger struggle. Iâ€™m thinking about my batteries, my breakfast, re-tying my lures, and then finally, how Iâ€™m going to strategically approach the day. That all takes time. And as I get older, I know I need more and more time,â€ says Grigsby, whoâ€™s caught every fish of his pro career a Quantum reel.

While younger anglers are bouncing down 71 South to Eminem, Shawâ€™s radio is off. Heâ€™s gathering his thoughts, and that happens better after five-and-a-half decades when nobodyâ€™s rapping in your ear.

Then, from amid the deep thoughts and silence comes a soulful scream of self-doubt thatâ€™s as out of place as a 21-foot bass boat in the heart of downtown Shreveport. â€œIâ€™m pretty sorry. Iâ€™ve been doing this for 27 seasons, and Iâ€™ve only made 14 Classics, Iâ€™m a 50-percenter,â€ says Grigsby.

As a writer who was once a teenager on the other side of the ropes 22 years ago begging Grigsby to sign my hat with a Sharpie, his words of humility sadden me. A former hero shouldnâ€™t talk this way, especially here on Day 1 of his 14th Classic. My only comfort comes from knowing that part of the privilege of telling their story is the humility with which they share it. And here in the darkness of 71 South is enough apparent lowliness to drown any ego youâ€™d think might result from qualifying for the Bassmaster Classic 14 times.

â€œI look around in those pre-tournament meetings at all the guys that are out here competing against me these days, and I canâ€™t help but think about how good they are,â€ says Grigsby, in an effort to explain his humility.

On tournament mornings, Grigsby eats on the go from a box of dry shredded wheat cereal. Itâ€™s easy. Itâ€™s healthy. And he likes the taste. And when much of your competition is 10 to 30 years younger than you; easy and healthy are valuable ingredients. â€œI get to the dock and Iâ€™m thinking â€˜well, the bass should be doing this or thatâ€™, but guys like Kevin, arenâ€™t thinking and guessing. They know.â€

Finally at 5:20 a.m., he pulls into Red River South Marina – the official launch pad of the 42nd Annual Bassmaster Classic. Heâ€™s arrived. Heâ€™s made it. But now thereâ€™s another strategic consideration. His randomly assigned ride along observer for the day is a man pushing 300-pounds. â€œOh man,â€ says Shaw, â€œMy first stop is a backwater place that I can barely get my boat to float into when Iâ€™m alone. That dudeâ€™s big enough that I may not be able to get in there.â€

Bass fishing is an on going game of adapting to change, and if pro angling careers had an odometer, Grigsbyâ€™s would be a good equivalent to the 168,352 miles on his truck. Yet through 27 seasons on tour, the mustache-wearing son of a former college professor has adapted well enough to experience Day 1 of bass fishingâ€™s biggest dance 14 times. Even when self-doubt, changing circumstances, and scattered thoughts threaten otherwise.