Amid the glamour and $500,0000 first place prize of bass fishingâ€™s biggest event is a strong dose of camaraderie, simplicity, and elbow grease.

Youâ€™d swear these anglers would sit separately, hiding secret lures from one another. Instead, Terry â€œBig Showâ€ Scroggins was urging his Toyota teammate Gerald Swindle to root around in his Tritonâ€™s rear deck dry storage compartment to get whatever worm weights or jigs Gerald needed to be better ready for Day 1 of competition on Friday morning.

And speaking of lures, no, thereâ€™s no Voodoo magic among the worldâ€™s best bass anglers. The notion that pros are privileged to use lures the weekend amateur angler canâ€™t get is a foolish one. In fact, Casey Ashley was taking a step back in time toward simplicity in the form of old skool spinnerbaits featuring rubber skirts with unpainted lead heads he makes in his garage. 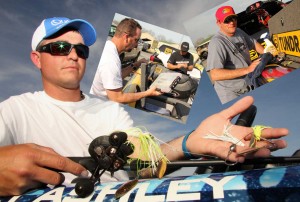 â€œYou donâ€™t need paint on your spinnerbait head to catch a bass,â€ said Ashley, whoâ€™s fishing his fourth Classic in just five years on tour. â€œIâ€™ve just always fished with plain old living rubber skirts and unpainted heads; I guess itâ€™s a confidence thing,â€ said Ashley, who like VanDam, and other Quantum pros, typically chooses a mid-range 6.6:1 reel to cast his spinnerbaits on.

Speaking of VanDam, with $5.6 million dollars in career prize winnings, and four Bassmaster Classic championships to his credit, in the final hours leading up to his hunt for Classic title number five, and $500,000 more, there he was sweating in Shreveportâ€™s sunshine.

Fourteen hours before the first cast of his 22nd Classic, KVD was wiping on one last layer of boat wax in an effort to make his sponsorâ€™s equipment look as good as possible, and to keep his professionalism at the pinnacle it constantly resides at, even on the eve of bass fishingâ€™s biggest event.