Wednesday will be the last shot Bassmaster Classic competitors get to figure out the Red River prior to the first official day of competition on Friday. But right now, the feeling among most pros is that past practice days are worth about as much as wooden nickels, and it’s what lies ahead that will surely determine who hoists the Classic trophy on Sunday afternoon.

Shaw Grigsby predicts the best is yet to come as he sat under sunny Northwest Louisiana skies
threading a soft plastic lure onto a hook tied to his 7’2″ signature series Quantum pitchin’™ stick.

I was hoping the weather would be kinda crappy this week and make it a tough tournament, but the forecast is calling for a lot of sun and 70-degree days, and that will put a lot of fish on the move to places where they’ll be susceptible to getting caught,” said Grigsby, who might win The Happiest Pro on Tour Award if bass fishing had such a thing. 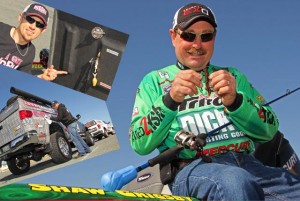 Read between the lines, and essentially, Grigsby is predicting this field of bass fishing’s best is preparing to bask in the sunshine by way of many heavyweight bags on the weigh-in stage. “To be honest, with all the sunshine we’re going to get, and warming waters, we couldn’t have come to The Red River at a better time, in my opinion.”

Boat U.S Angler member John Crews agrees with Grigsby. “I’ll tell you what, any pro that says he’s got them dialed-in because of practice is fooling you and himself, this warming weather is going to change everything by the hour from here forward,” said Crews. “The water was around 52-degrees, but when the sun came out for just a little while this past Sunday, it warmed the surface temp four degrees in about two hours,” said Crews.

Regardless of where Crews chooses to fish on the Red River, you can count on three special lures constantly hanging from his BassCat’s dry storage lid to help him keep life and career in proper perspective. “Each of those three lures was given to me by special people,” said Crews.

“My mother-in-law gave me the tiny crankbait in my Christmas stocking one year, the old Hellbender came from one of my fishing mentors, Rick Hawkins, and the little mechanical fish was a gift from another special buddy of mine,” explained Crews. “They hang there to remind me that there’s a lot of special people pulling for me to do well, and that provides a lot of meaningful motivation.”

David Walker finds motivation in memories of a past life that required him to punch a time clock in the automotive industry factories near his native Detroit. “If you worked 52 hours a week, you could get enough overtime pay to make it seem worth it,” reflected, Walker as he put the shine rag to his Toyota Tundra. “I’ve made about 1.2 million dollars as a fisherman, but I think I’ve spent that much too, just to stay out here competing. So I can’t afford a pit crew to shine my truck for me,” he laughed.

The funny thing about Walker’s truck is that he bought it on the Internet without ever test-driving it. “I talked to Scroggins and Swindle about their Tundras and they told me they loved them, so I took their word for it, and ordered it on-line from a Toyota dealer right after I won $100,000 at the Bassmaster Elite on Lake Wheeler last June, ” said Walker. “I just wish I would have bought it sooner, because I did the math, and I figured out that I had missed out on $6,000 in Toyota Trucks Bonus Bucks,” said Walker, with one more spray of auto wax, amid last minute preparations to look good during a sunny week on bass fishing’s biggest stage.