I’m trying to remember where I left off last time…I believe it was somewhere around heading from Table Rock in Branson, Missouri that got cancelled and then headed to West Point Lake in LaGrange, Georgia.  We blew a hose on my truck, got that fixed, it really was a timing deal that there was was a Ford dealership on our way we pulled in there on a Friday afternoon and they were able to fix it for us so it was a really, really good.  So we were able to spend some time with Team Pearson from Strike King and his kids played with ours at a Chick-Fil-A playground and it kind of broke up the trip.

We were running with Don Barone and that is where he parted and headed over to Cullman, Alabama and we drove from there on down to LaGrange and made it there by late that night.

Well, LaGrange was a tough event but in a strange sorta way I kinda like those events like that where fishing is tougher, where you are on the edge of your seat all the time. I learned a lot about myself as an angler. I did really well there.  I caught some key fish on a KVD 1.5 that really made a big difference in my overall weight and getting those big bites was key and that bait really did it for me in the clutch. One of the other things that then we headed off from LaGrange and so I finished off at 36th overall; I felt like it was survival.

But, one of the neat  deals over at West Point was we took the training wheels off Daniel’s bicycle.  Sandy took them off and he was off to the races, he went speeding down the campground road.  So it was really a neat deal, I wasn’t actually there for it, but I was there when it was new and fresh, it was kinda neat to see those things, sometimes you miss that stuff on the road, but you kinda get to experience the newness of it, so it was really neat.

Since I was at Table Rock with Don Barone, he’s been talking with me about the three c’s of sports; consistency, courage and confidence.  I think some of those things; I’m trying to see how I line up with of those things as an angler and learning more about myself as well. The mental approach is super important; obviously, I think it is paramount to any sport as well as it coming into play in professional fishing.

From there we went on to Lake Murray over there in Prosperity, South Carolina, on our way there, we had problems with the truck again when we got some water in the fuel.  We must have gotten some bad diesel on the way, my wife; the gem that she is, oh and the guys on the service truck really helped her because we didn’t know how to get the water out of there and to drain the water separator and so the guys on the service truck really came in and were just gems to help Sandy out and she took care of that.  We ended up needing a fuel filter… Dan from Yamaha and Happy from Nitro Bass Pro really helped her out, but what I needed was a fuel sensor and a fuel filter.  My wife did that on one of my days on the water.

Murray was a tough event, it Murray was another tough one and while like I said I like those types it didn’t turn out quite the same as West Point.  The Blueback Herring lakes are something that represents a kind of different challenge, because the bass actually take on striper-like characteristics.  Those events tend to be hit or miss for me.  It seemed like the first day practice things were working really well with top water and swim baits.  That changed more and more, so by the time tournament rolled around I was still catching a bite or two on top water but by the end of it there I was throwing a drop shot and just really struggling to get quality bites. Which was something that I wasn’t throwing in practice it was just changing daily and I ended up with a tough event there with two more to go. 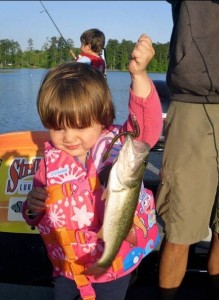 During day one of the tournament at Lake Murray, my marshal and I came upon a man that was stranded out in the middle of the lake with his three year old boy on his back.  His boy fell in and he just jumped in after him leaving the boat running so it naturally began its spiraling sequence and it really looked like it was heading for them. He didn’t have a life jacket on, but his son did h is son looked to be about two or three years old crying hysterically.  He had two dogs, and was trolling for stripers, he had way too much on his plate.

I don’t know how long he was struggling in the water but we were able to come in and deflect his boat from their path and my marshal was able to jump in the boat and kill the ignition and fished them out of the water; he looked pretty shocked and they were absolutely really tired.

It was one of those things that anyone would have done had the opportunity presented itself to them, but we were the first people on the scene and we were able to fish them out.  It was quite the situation, and it really rattled me because I’ve got two kids; just the idea that they might not have made it if we didn’t come by, if somebody hadn’t have pulled them out of the water, it might not have ended well if somebody hadn’t come along.

On our way home we stopped off at Jelly Stone Park which is a campground and a kind of theme park thing.  We have been running on the road for almost four weeks this coming Thursday and we just needed a little break, R and R and down time and the kids just loved it and we did too.  We actually fished on the little private lake that they had there and it was good.

We’re going to the Michelle Short Charity Event on Lake Dardanelle that Kevin and Kerry Short put on, so we are looking forward to that. It will be a family event and Daniel’s first tournament with me.