For two days, controversy on the water tried hard to take center stage at the Bassmaster Elite Series event on the Arkansas River.

However, in the end, instead of competitive emotion, it was commercial river barge traffic and subsequent delays spent waiting to pass through the infamous lock and dam system that caused competitors to sweat hardest and lose the most weight. 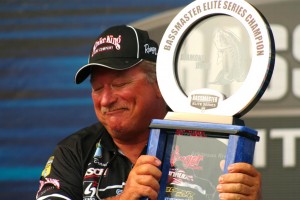 The majority of the Top 12 field knowingly gambled in trafficking through two lock and dam systems, and for the most part, things went smoothly for three days, until today when it counted most, and left most competitors six minutes late for weigh-in.

As tournament emcee Dave Mercer put it best in answering his own question, â€œCan anybody stop Kevin VanDam? Perhaps, a lock and dam system can.â€ Indeed Kevin was late to weigh-in like eventual champion Denny Brauer, and all the others that locked down to Pine Bluff. Still, Kevinâ€™s tenth place finish is exactly what he needed to prime the pump for another Toyota Tundra Bassmaster Angler of the Year title that will be decided next week at Lake Wheeler.

â€œMy goal was to make the Top 12 so I could go to Wheeler in striking distance of the Angler of the Year title. Angler of the Year is my goal from the first day at the first tournament of the year. I love going out everyday and figuring out what it takes to catch little green fish, and I love Wheeler. Iâ€™m looking forward to heading there next,â€ said VanDam.

While VanDam leaves licking his chops; most satisfying at dayâ€™s end was seeing widely respected Denny Brauer survive on-the-water rivalry and lock and dam delays en route to winning an Elite event that contained more drama than any in recent memory.

But with drama, as the clocked ticked away precious pounds with each passing minute that Brauer sat locked-out, came the ultimate compliment of respect that so many pros have for Denny.

Gerald Swindle, who is catching top finishes everywhere the tour seems to stop these days, caught a ton of admiration for the brotherhood brought forth during the delay. â€œThere were nine boats down there, all of us talked and put a group plan in place while we sat there stuck for an hour. We decided to make sure Denny got out first once the gate opened. And then guys like me that had a good sack of fish would leave next behind Denny,â€ explained Swindle.

Gerald continued, â€œYou heard a lot about all the animosity this week, but if you had been in that lock, youâ€™d have seen how many of us admire that old man (referring to Brauer). Witnessing all of us guys help one another meant a lot to me. I was literally pushing Dennyâ€™s outboard with the nose of my boat to give him a boost when the gate finally opened,â€ said Swindle.

Indeed, once more this week, the brotherhood that is so much a part of this sport trumped any animosity that tried to steal the show.