Dynamic Blog – Take the Socks. Save the Back.

The brightest thing at the boat ramp today during a rain threatened pre-dawn launch was a pair of blaze orange socks Gerald Swindle gifted to Fletcher Shryock. Actually, they were only a shade brighter than the fluorescent lime colored socks Swindle had on his own feet.

“I like that kid. I saw those socks, and had to buy them for him. They matched his signature color,” said Swindle. It’s obvious that Shryock is a bit taken back by the generosity of a fellow competitor and one of the sport’s most popular anglers.

Shryock laughs at Swindle’s humorous gesture, offers his sincere thanks, and tells Gerald to wish him luck because he’s about to make a really long run. “I’m going for broke. It’s a long way to travel if they don’t bite, but I’ve got nothing to lose at this point,” says Shryock in reference to his place in the Toyota Tundra Angler of the Year points here at the Bassmaster Elite Series Plano Championship Chase – this season’s final regular season event.

Ironically, minutes prior to Shryock talking of heroic commutes, Swindle drove from the hotel to the boat ramp talking mostly about his decision not to run a huge distance in this event, as a song called “Midnight Ferry” by Detroit’s favorite son, Kid Rock played along. 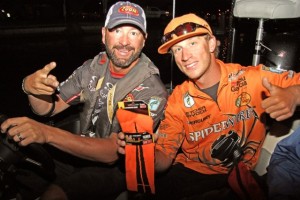 “I’m only gonna run about ten minutes,” said Swindle, who has $1.5 Million in career earnings to his credit. “A lot of these guys who are down the list in points are gonna make crazy long runs this week in an effort to pull off a miracle and get into the Classic, but I’ve had five back surgeries, I’m sitting 14th in the AOY points, and I’m not gonna risk shaving ten years off my career due to a back injury at this one event.”

Guys like Shryock who are going for it all will run 90 minutes to as much as three hours, depending how far they travel, and mostly how big the waves are. “There’s one patch of water called the Miracle Mile that should actually be called Miracle 8 Miles – it’s always brutally rough stirred by pleasure boats as big as the town I live in,” says Swindle, who has competed on St. Clair at least seven or eight times throughout his career.

“There are actually two tournaments taking place here in my mind. One on St. Clair and one on Erie – because you’re going to have numerous guys fishing in each,” explains Swindle. “It may very well be won deep with a drop shot on Erie, but I’d rather save my back and catch 17 or 18 pounds throwing a Slender Pointer 112 jerkbait or a War Eagle spinnerbait. I won’t get as many bites, but when I do, they’ll be good keepers.”

“Heck guys talk about dragging a tube on the flats. Well the flats are as big as Mississippi and sometimes the contour never changes but 6-inches for two miles. That just ain’t my style,” 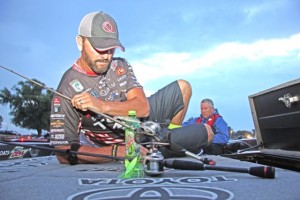 he adds as he honks at an 18-wheeler that gets way too close to the side of his Tundra.

Between horn honks, bites of peanut butter Pop Tart, and a swig of Diet Dew, Swindle further discusses his health. “My health is as much a part of my career as reading a depth finder,” says Swindle. “Look, there’s probably better things to eat for breakfast, and I’ve never turned down a piece of bacon at the Waffle House, but I eat this stuff in moderation, and spend a lot of time jogging and going to the gym. That’s the only way I know how to stay fit and keeping playing this game at a high level after five back surgeries.”

“I’ve probably wore out two bodies already compared to the one Fletcher Shryock is still working on,” laughs Swindle, who with a Top 20 here this week could very well vault into the Top 8 of the AOY points and qualify for Toyota All-Star Week next month in Muskegon.

One thing is for certain, if Swindle does well this week, he’ll catch them not terribly far from launch in St. Clair, he’ll avoid a sixth back surgery, and he’ll make sure everybody is wearing socks as colorful as his personality.