For Texas-based FLW Tour pro Cody Bird, the age of the bait in question doesn’t really matter because it’s a single soft plastic that covers an incredibly wide variety of needs. While he hasn’t yet thrown away his ribbon tail worms, crawfish imitators or creature baits, he can considerably lighten his load due to the resurgence of the Kicker Fish Bubble Fry. 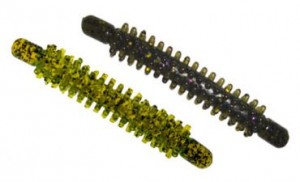 “It used to be called the Stud Fry,” Bird said of the stubby symmetrical French Fry style bait. “It has 136 short little appendages that help it float up. One of the great things about is that you can hook it at one end until that end is torn up and then swap ends. That makes them last twice as long.”

He noted that for years veteran Texas tournament pro and television host Bill Wilcox made this unassuming-looking little four-inch fry his personal moneymaker, winning tournaments throughout the Lone Star state while others hurled larger lures. “When they discontinued it, he hoarded them up,” Bird said. “We’ve all wanted to get our hands on some because it’s such a good search bait on a Carolina Rig.” Indeed, the old ball and chain is where this stubby piece of plastic gets used the most. Now Kicker Fish Bait Company has brought it back, and while Bird didn’t really want to give up the lure’s multiple uses, he’s shared a few other circumstances in which this subtle baitfish imitator gets the job done, especially in pressured situations.

As noted above, he relies on it as a Carolina Rig staple, believing that its naturally buoyant posture imitates a dying baitfish better than any other plastic on the market. “It’s awesome any time of year, but it’s especially good when the shad are dying off.” On a 4/0 Gamakatsu offset shank hook (not an EWG), it floats better than most other plastics, and that hook provides a “solid hookset where you don’t lose them,” he asserted. It’s a deadly search bait that attracts fish from a distance, but also does not provide negative cues for skittish fish up close. While it’s certainly a numbers bait – Bird caught 80-100 fish a day off of a single roadbed on the Fry during a recent FLW tournament on Sam Rayburn — he also noted that “it catches big ones too.” In fact, one of the largest bass he’s ever caught came on one during a Texas/Oklahoma Shootout on Mexico’s Lake Guerrero.

Sometimes, though, the Carolina Rig doesn’t provide an optimal presentation. For example, in heavy standing timber, it requires an angler to pull his bait up and over the cover rather than staying in the strike zone. Then Bird will employ the Bubble Fry on a “Bubba Shot,” an oversized dropshot rig on 15 lb. fluorocarbon with a 3/0 Gamakatsu Superline Hook. For both deep water presentations Bird relies most frequently on a Chartreuse Pepper version of the lure, the “old Wilcox special,” and while it’s known to be ultra-effective in Texas he’s also used it to great success at other tournament venues including Kentucky Lake. 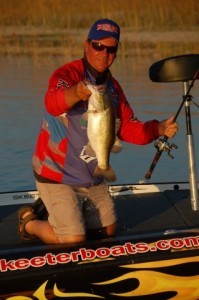 Bird claims that while the deeper presentations are its most frequent environs, the Bubble Fry is not limited to the depths. It also excels when bass are in skinny water. Not only does it look ultra-realistic, but it also features the garlic scent of JJ’s Magic to keep them holding on. In the springtime, he employs it on a weightless Texas rig around shallow bank cover. For that presentation, he goes most frequently to Green Pumpkin or Watermelon Candy versions. When the bass are finicky, he’ll fish it wacky style. Again, this is not limited to small fish factories. “When the fish are getting a lot of pressure in the buck brush on Rayburn, I’ll fish it wacky,” he said. Additionally, on a light Texas rig, it slithers through cover like a compact creature bait. In a January 2003 Bassmaster Tour event on Florida’s Lake Okeechobee, he used it to “pull out of a hole.” When his bed fish dried up, he switched a spinnerbait, but then that bite got tough too. Bird faced the prospect of a light Day Three bag, but a five pounder on a junebug Bubble Fry allowed him to salvage a finish in the thirties.

Of course Bird is best known on tour for his sight fishing prowess and this is another place where the Bubble Fry stands out – or, in this case, stands up. He rarely relies on it exclusively for that purpose, noting that any times he’s chasing bedders he tends to have five or six rods on deck, but the bubbly appendages provide an action that’s enticing on a profile that bass have trouble spitting.

“It’s just a little old caterpillar-looking thing,” he said, “But when you get it in the water it turns to life.”