Jerkbaits in Fall with Mark Menendez 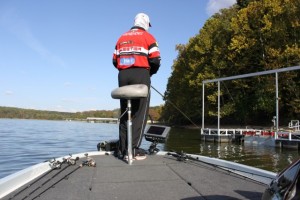 So, how do the pros stay in touch with the bass? According to most tour level pros, staying light on your feet, and being ready to move at a moment’s notice is key. For others, being able to cover vast amounts of water trying to intercept bass at likely locations is the way.

Paducah, Kent. pro Mark Menendez is one of those anglers, and he loves a jerkbait in the fall.

“I love a jerkbait bite any time I can get on one,” Menendez said. “But, in the fall, they really help me locate fish quickly, and they can really make a big difference at the end of the day in my catch.”

Why a Jerkbait?
A lot of anglers wonder why they might choose a jerkbait over more traditional fall lures like crankbaits or jigs. Menendez said the reason is the magnetic power of the lure. “I call these my bass magnets,” he said. “In the right conditions, they have the kind of action that can draw fish in from long distances.” 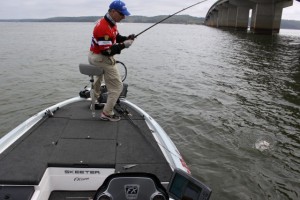 He also said that it is the kind of lure that is really good in tough conditions; especially wind. “Jerkbaits allow me to fish in a slight breeze and in heavy winds,” he said. “It’s a bait that I can fish in the wind and not worry about the difficulties of line control with a bottom bouncing lure, but I have more control over it than a crankbait.”

Choosing a Jerkbait
Menendez said he is choosy about his jerkbaits; more so than other baits. The lure has to have the right action for it to really be effective this time of the year,” he said. “I like a particular action in warmer water, and a completely different action in colder water, so I choose my baits accordingly.”

He is also choosy about colors. Not just in the shades that he prefers, but in how they are actually painted. “I’m not super choosy about soft plastics or crankbaits,” said Menendez. “But, I want my jerkbaits to have very defined lines that really create a distinct appearance when the lure is jerking and darting.” With that in mind, he carefully goes over each lure and sets aside those that have the optimal finish, and he turns those into game day plugs, while the rest become practice versions.

As far as actual color patterns go, he lets conditions make the decision. Remembering that jerkbaits are primarily visual attractors, he mainly throws them in clear water, with at least two feet of visibility. With that being a constant, he chooses based on sky and wind conditions. For bright days with a little wind, he prefers translucent colors such as Pro Blue or Sexy Ghost Minnow. For days with high skies and a steadier wind, he prefers flashier finishes, so Silver Tennessee Shad or Chrome Ayu get the nod. If it is overcast or even raining, then a Chrome Gold Black or a Sexy Shad becomes the choice.

Where to Jerk
When he begins his search, he factors in the time of the year and the water temperatures. In early fall, when bass have begun their ambush feeding on migrating bait fish, he looks to the creeks and tributaries. However, as winter draws nearer, he moves back to the main lake.

As he alluded to earlier, wind is an important consideration for Menendez as he looks for where to target his casts. “I look for banks with wind blowing directly on them and target small unique features,” he said. “I look for small corners, gravel flats and small points with wind blowing on them; those are the little things that hold bass the best and don’t get pounded by everybody else on the water.”

Jerkbait Gear
Menendez prefers a rod that can impart a lot of action into the bait with less effort so that he can work the bait all day. With that in mind, he selects a 6’6″ medium fast Team Lew’s rod because it has good backbone with a fast tip that will impart action, but still have enough give to keep fish hooked.

He pairs his rod with a Lew’s Tournament Pro baitcasting reel with 6.4:1 retrieve speed so that he can pick up line quickly in between jerks, and he matches that with anywhere from 8 to 15-pound test line. His choice of material varies depending on how he needs to retrieve the lure. In warmer water, when he needs to really snap the lure, he uses Seaguar Invizx Fluorocarbon line, but in colder water, when he wants the lure to have more subtle action and suspend more on pauses, he uses Seaguar Senshi monfilament. 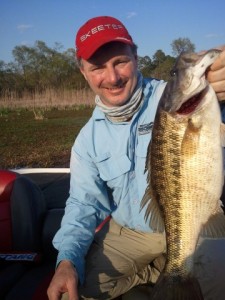 Retrieve
For the most part, Menendz chooses to use the standard jerk, jerk pause retrieve; which works for him most of the time. However, he does have a little trick for when he finds a lot of bass following without committing. “If I’m getting repeated followers, then I will sometimes really snatch the fire out of the bait; kind of mimic a hookset” he said. “That really pulls the lure several feet in a hurry and makes them have to react; it can make a big difference.”

Final Tips
Menendez said to remember to try this lure in places that you wouldn’t think it would work. “I’ve seen bass come from a long way off to eat a jerkbait,’ he said. “Don’t be afraid to try it when you see bass suspended as deep as 30 feet, because I’ve seen them react to it.

“That, and just remember to pay attention to the water temperature,” he said. “When it’s colder, try subtler snaps and longer pauses and when it’s warmer, try more aggressive jerks and shorter pauses and you can find and catch more bass on one of my favorite lures too.”