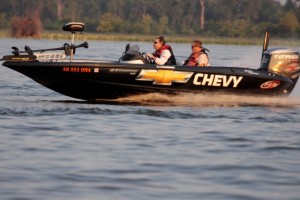 With a career like Larry Nixon has had; a certified legend in the sport of bass fishing, there is only one outcome when fishing a season ending championship like the Forrest Wood Cup that matters.  When you’ve won the Bassmaster Classic, two Bassmaster Angler of the Year titles, you are the first angler to earn a million dollars in Bassmaster history, you have won four FLW Tour events and have amassed nearly $1.6-million in FLW earnings; you only have one goal.

Winning the 2013 Forrest Wood Cup on the red River out of Shreveport / Bossier City, La. is the only outcome that truly matters.

As far as a career perspective goes, a second place finish means nothing to your career résumé, so you sell out completely, and go for the win.  From a career perspective, every chance you get to walk across the biggest stage your league provides and feel the adoration of its fans; those memories are priceless; only surpassed by celebrating a win with them.

So, you sell out and give everything you have for that goal, every decision is made with the win at heart, and it starts with how you practice.

“I spent seven days pre-fishing the Red River before it went off limits,” said the Bee Branch, Ark. pro.  “I’ve spent quite a bit of time on the Red River in the past 10 years, but I don’t consider myself a River Rat, so I wanted to get as much time as I could in preparation for the tournament.”

His experience has taught him that river bass tend to act like lake bass in summer, and they tend to congregate around specific targets.  “They tend to gang up on breaks, grass and wood,” he said.  “So I spent as much time as I could searching for any of those types of items in pool 5.” 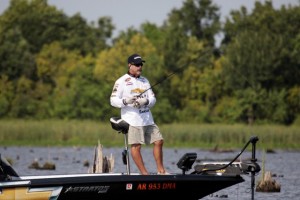 Nixon said he focused on pool 5 because he “swore off locks a long time ago.”  So, he dedicated himself to locating bass in the backwaters primarily, then turned to searching for specific things that he could target on the main river as a backup plan.  “I knew that the best chance of winning was going to be in the backwaters,” he said.  “But, I needed to find something in case I needed to catch a couple of fish or two to finish a limit if things got tough.”

He planned on using a Jewel Swim It swim jig, a Luck ‘E Strike crankbait and a variety of Flippin’ baits in his search, but quickly narrowed it down to a pair of creature baits that would provide the right bites.  “I thought that there might be some reaction bites on the swim jig and the crankbaits, but I couldn’t really get them going in practice,” he said.  “I threw them a lot, but couldn’t get them going, so I focused on Flippin’ and Pitchin’.”

He said he tried traditional colors, but found that he could get response on a color that would give him an advantage.  “I knew that these fish were relating to shad, so I tried a smoke silver flake bait when black and blue didn’t work,” he said.  “I found that I could catch fish behind other anglers with it, so, I knew I had figured something out.”

He contacted Gary Yamamoto Custom baits and had them send as many Yamamoto Kreatures in Blue Pearl Silver Flake as he could get.  He would use those as his primary weapon, but mix in a green pumpkin “hog’ as he called it with the tails dipped chartreuse, especially when in the backwaters.

Day One
Nixon knew that things were going to be tough when the competitors ventured out for the first day of competition.  The area had received an unusual cold front that had come in on the day before the event that came in from the north.  With cooler temperatures, brief periods of heavy rains and a falling barometer, the fish were likely to be put off.

“I could tell right away when I pulled into my primary area (White House) that things were going to be different than they had in practice,” he said.  “The cold front had created a situation with the wind blowing silt through the milfoil patches and across the flat; it was going to be iffy.”

He was able to find enough bites to put together a 13-pound, 4-ounce limit that landed him in third place.  The trouble with his third place finish was that two anglers, Randall Tharp and Bryan Thrift both caught limits that eclipsed 18 pounds; Nixon had some ground to make up. 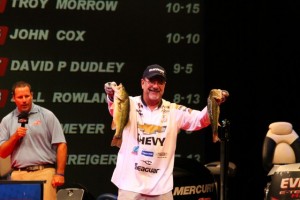 Day Two would prove to be Nixon’s best day in the weight department.   he arrived at his starting spot in White House to find that the silt had moved deeper through the area, and midway through the day, he found himself in the position to make a move to his backup program.

“I fished until round 10:30 and had one good one and two little babies in my livewell,” he said.  “So I fired up my Evinrude and idled through the stump field and headed back out onto the flats near the main river.”

He did what he called “reading the water,” a skill that his father taught him as a young angler to catch his best limit of the week.  “My daddy taught me to pick out the spot that looks like it is the most likely to hold a fish and start there,” he said.  “So I just started Flippin’ and Pitchin’ my way around shallow flats and ran into a few.”

His 14-pound, 5-ounce limit kept him in third place, but with Tharp and Thrift slipping, he found himself just over two pounds behind the leader with 27 pounds, 9 ounces.

Day Three
Day Three proved to be the day his backwater area became unfishable.  Thanks to the wind, the silty, dirty water  had infiltrated his primary area, and he was forced to adjust.  He made the move to the river, and started looking for fish along the types of flats that

had produced the day before.  However, he made a miscalculation.

“I didn’t plan on the amount of chase boats following anglers, nor the skiers or cruisers on the river,” he said.  “I knew that the amount of boating pressure and the dirtier conditions on 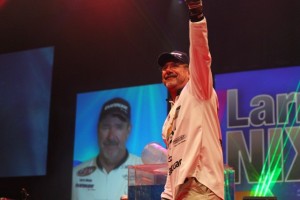 the water had just about ruined the river.”

He caught a limit weighing 8 pounds, 5 ounces and pushed his overall weight to 35 pounds, 14 ounces; good enough to remain in third place, but he fell two more pounds behind Thrift and Tharp.  He knew he had some ground to make up.

Day Four
He said he started the morning with a complete go for broke attitude and game plan.  So, he headed back into the type of backwater areas that he had been targeting with his Flippin’ and Pitchin’ baits, but this time, he went with a frog.  “I knew I needed to get three or four big bites to win it, and the frog was the best way to get those kinds of bites,” he said.  “Halfway through the morning, I hadn’t had one bite, so I ran out to the river to just get a bite or two and collect my thoughts again.”

He went to the river, put a six pound limit in the boat, then went back to the backwaters, where he was able to catch a bigger fish and cull up to 8 pounds, 6 ounces.  It pushed his total to 44 pounds, 4 ounces; and dropped him to fifth place.

Not the day he had hoped for, but he still felt like he made the right decision.  “I knew I needed to swing big for a chance at the win,” he said.  “It didn’t happen, but I’d make the same

decision again tomorrow if I had to.”

Turning Point
Nixon said the biggest negative turning point of the event for him was the storm front that pushed the silt and dirty water into his primary areas.  “I figured it would have an effect on me, but I hoped I could make it last a little bit longer,” he said.  “But, the biggest positive thing I had was figuring out the Flip bite with the shad colored Yamamoto Kreature, nobody else was Flipping that kind of color, and it helped me catch more and bigger fish.” 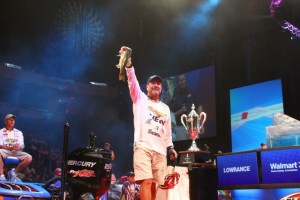 He relied on three primary lures for his top five finish on the Red River.  The primary weapon was the Blue Pearl / Silver Flake Yamamoto Kreature, and his other two were a green pumpkin “Hog,” as he called it, with the tail dipped chartreuse, and a SPRO Frog on day four.

He used a Dobyns Champion Series 735 with 6.1:1 retrieve speed reel and 15-pound-test Seaguar Invizx fluorocarbon line with n 1/8 to 3/16-ounce sinker for the Kreature.

He used the same rod and reel, but increased the line to 17-pound-test Seaguar Invizx for the “Hog,” with a 5/16 to 3/8-ounce sinker.  He said he swam the Hog around cover, then let it fall into holes in the grass etc.

His frog gear was a Dobyns Champion Series 736 and the 6.1:1 reel that he spooled with 60-pound-test white Seaguar Kanzen Braid which he colored black with a permanent marker to help camouflage the line.

He said the biggest key to his success was the color of the Yamamoto Kreature, as well as the slow fall.  He said the flappers and appendages of the bait, mixed with the lighter sinkers made  big difference.  “Some of those guys Flippin’ a Beaver type bait really had too fast a fall for the better quality fish,” he said.  “They needed a slow fall out there; it really worked for me.”