John Crews – Update During the Break 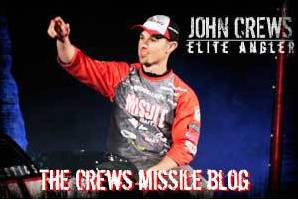 Hey, this is John Crews, I was just giving you guys a check-in after a three week road trip.

I was at a SPRO and Gamakatsu Writer’s Conference down in Lake Lanier, Georgia.  It went very well and had a good time there.

Went straight from there to the Mark’s Outdoors Lay Lake Open, which I have done – I think it is my third time – I really enjoy fishing that tournament.

We had almost sixteen pounds and ended up coming in twenty sixth place – there were a lot of good fish caught  in that tournament  – fishing with a guy it’s a little bit different fishing a team tournament than fishing by yourself, so I really enjoyed that.

And then, from there, I went straight over to West Point for the Elite and had to grind them out there.  Ended up finishing 33rd, so, it was a good event, but not a great event.  I ended up 33rd; I didn’t have a limit the third day and I lost one between five or six pounds and had something that I have never had happen before – my line, swung around and get caught in the little loop in the little inlet of the hook eyelet and that caused the line to break.

I have never had that happen – so it was a statistical likelihood – I don’t know what the chances of that happening are, but, it has got to be miniscule.

But anyway, I found a way to fix that problem and deal with it, so, then I moved on from there over to the Alabama River where I finished 22nd.  I had a decent event there, I never really figured out how to catch those big spots – I was fortunate to catch a four pound spot on the second day, but I caught most of my weight out of the backwaters catching large mouth.  I was able to catch a limit out on the main channels using the Missile Bait Warhead jig bait – that thing is just nasty!

If you can figure out how to get around them –I could never figure out where to throw the thing to catch those bigger ones.  And then caught a bunch of fish on a SPRO Frog – SPRO Fat John and a Missile Bait D Bomb – Flippin’ it in some heavier cover in certain kinds of backwaters, so that was my three week road trip.

I ended up moving up in the points before the road trip to about 13th in the points, so I am going in the right direction as far as that is concerned.

I’ve got three more events; got about five weeks that I am going to be based at home where I’ve got a couple of trips here and there and I will give you an update on everything that is happening at the hacienda!