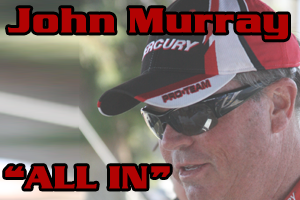 Giving you a little Alabama River recap…had a tremendous week last week; probably one of the better tournaments I’ve had in quite a few years, it was a lot of fun and added to the great memories from that place before.

I actually fished it in ’03 and it had similar flood conditions – I had gone down river the first day and I had caught three pounds and I was almost last out of the Elite 50 that year.

So, the second day I ran up the river and I found these big spots – I weighed a big string in the tournament; a nineteen and a half stringer , and made it all the way back to thirteenth – just barely missed the cut.

So this year, seeing the floods, I was ready for it man, and knew what I was going to do.  I stayed up river; I developed a couple of different patterns.  My first was sort of a deeper bite with a River2Sea Touchdown Jig – 1/2 to 3/4-ounce jig, overall, a lot deeper than I thought I would catch them.

And the second bite, obviously, was a flip bite and that really was on the first day.  We had a tremendous high water that first day – they really upped the flow, so, those fish that were out on structures moved right up on the bank.  They were on cuts; eddies – basically, I was sitting downstream eddies- steep walls and deep, shady pockets because it was sunny out.

I was fortunate enough to lead it on the first day with almost nineteen pounds.  I really had a lot of fun Flippin’ them and with fifty pound braid you could handle those big spots that way.

The second two days I tried to stay with that flip bite and it was just going away, the water was falling and the current was receding.  And the third day I actually got a big one, like a five pounder on a crank bait and but, didn’t quite put it all together that day.

The last day, when I made the top twelve I knew that I could further that pattern and I had a great spot; a little spot to start on.  I started catching them right away, including one that was about four and a half pounder on a Touchdown Jig and then I went to the crank bait and man, it was on!

The one thing that will strike me about that tournament is we always wonder why we have so much tackle on our boats.  I literally lost 50 to 70 jigs this week flippin’ and pitchin’ into heavy timber that was 12 and 15 foot deep that had root systems and vines and everything else – I just went through tons of tackle – spinner baits, crank baits – everything!

So, sort of a wild deal as it was thinning my tackle box.

I always complain that I have too much tackle; but I definitely don’t now!