Advanced Angler reader and Lobina Lures Rico Fan John Karbowski, of Gloversville, NY, recently discovered that the Rico is capable of catching huge numbers of bass all day long, and big bass too.

On an outing in the Adirondack Mountains with a friend, Karbowski used one lure; a C.L. Shad colored Rico for three days. The result was hundreds of bass and a personal best.

Read his tale below and share in finding out why “Every Rico truly does have a Story.”

What makes a successful fishing trip? Lots of laughs? Lots of sun? Lots of fish? How about all of these wrapped into one very successful weekend? It was a weekend in mid July, when I was invited on a fishing trip in the beautiful Adirondack Mountains with a good friend of mine.

I had no plans that weekend and the weather forecast looked great. It was supposed to be 80 degrees and sunny on Friday, Saturday, and Sunday. We headed north first thing Friday morning and fished for three consecutive days on three different lakes in the Adirondack Mountains of Upstate New York.

I started Friday morning with my Rick Clunn Rico in the C.L. Shad color. Little did I know, that this was the only lure Iâ€™d need to tie on for the entire 3 days of fishing. I caught a few small bass first thing Friday morning, thinking to myself that the topwater bite would be slowing down at any second as it got later in the morning. 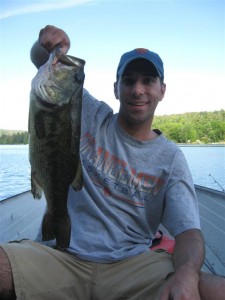 Not only did I catch the most fish of my life in a weekend, but I also caught the biggest bass of my life, a 6-pound, 5-ounce largemouth on the final day of the weekend. When you have a combination of laughs, good weather, and the Rick Clunn Rico, you are guaranteed lots of fish and an absolute amazing weekend of fishing.

Great story John and congratulations on a great trip. 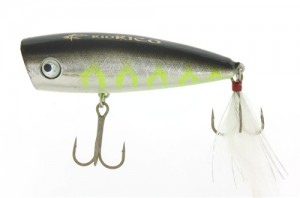