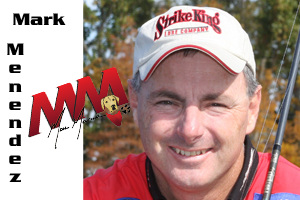 I have been chasing my tail the last couple of weeks! I have traveled and actually fished a bit! I represented Skeeter Boats at a couple of events. It is always fun filming a Strike King’s “Pro Team Journal.”

My first trip was to Indianapolis, IN to the Indy Bass Club’s Cancer Benefit Event on Lake Morse. I have a bit of history with the club. They contacted me early this season asking for autographed hats and shirts for the event. I sent them a box of goodies. A week or so later, an envelope came with my wife’s name on it from the club. The Indy Bass Club had sent her a gift certificate for a pedicure! The club was following Donna’s battle with cancer and wanted to do something for her! They also included a wrist band that says, “Indy Bass Strong-Cancer can kiss my Bass”!  I have had it on since the day we received it. The treat came at the right time to make Donna smile!

The Indy Bass Club event found me paired with Precision Propeller Inc. engineer Mike Anderson. I’m sure I bugged him with all of the prop questions. It was a great day on the lake as we caught lots of small fish with three nice keepers in the well. The tournament was won with better than 13lbs. Lake Morse is a 1,600 acre lake that receives tons of pressure. It has a healthy fish population as well as jet skis and pleasure boaters!

My next stop was the College Bass National Championship on Chatuge Lake in Young Harris, GA. Skeeter /Yamaha had me there to talk to the qualifiers in a round robin format. Elite Series Yamaha Pros Marty Robinson and Hank Cherry were there. Elite Series Pros Jason Williamson and Brandon Card were also on hand. The qualifiers were broken in to group of 30 and spent 15 minutes with each of the five pros. Questions ranged from sponsorship, techniques, to “How do we fish on a lake with Blueback Herring? These guys were all very serious anglers. I look for some of them to step to the Open level after graduation.

The following night, I was the Keynote speaker addressing the group at the tournament dinner. I delivered a message of responsibility to these anglers. College Bass has disclosed this group of anglers in the “eye of the public”. Through Bassmaster television, Bassmaster magazine, and Bass Times this group must shoulder the burden of protecting our sport. Bass fishing has a gentlemen’s aspect to the sport. Golf, tennis and Bass fishing are still closely regulated by the players that play the game. We have rules. We also police the sport while playing the game. In a time when Performance EnhancingDrugs(PED’S) dominate the major ball sports, bass fishing has a PED of its own. That is illegal information! I told the group to do their own homework. Short cuts would only have short term benefits. To make a long Bassmaster career, anglers must rely on their own talents, instincts, and homework! This will protect the purity of our game. I have since had several e-mails from the college anglers. They seemed to be listening!

The next morning I was off for Paris Landing, Tn. I was to film a Strike King show with FLW tour angler Billy McDonald. We managed to put a show together in a very short order! We fished a giant school of finicky bass out on the main river ledge of the lake. It was a good time filming with someone as quick witted as Billy.  The show will air during the first quarter of 2014.

Many miles and a few bass made the last couple of weeks a blur. Hotel rooms, truck driving, and fishing were common place. It seems as if I were back on tour!