It was an eventful Memorial Day weekend trip to the Indianapolis 500.  But, before we get too far, please let me say thank you to all of our Armed Services.  Please know that I think of you on more than Memorial Day, but you’re especially on my heart today.

My friends at the IZOD Indy Car Series set us up with a motor-home in the infield for the second year in a row. This year Kim and I took our friends Gary and Beth Barbier with us because Gary’s birthday fell on the weekend.

I don’t know what it is about my trips to the Indy 500 yet, but I’ve had two and last year was almost record highs and this year it was record highs. So, Indy at 90 degrees with ugly humidity and let’s just say it was hot.

That leads into the first interesting part of the weekend. The motor-home that they set up for us shorted out a switch box under the bed in the bedroom and the loss of power would not allow us to use the air conditioning. Needless to say, Friday night and Saturday were miserable, until they got us a back-up RV Saturday night at 11:30. 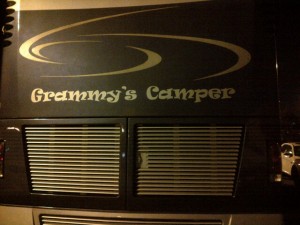 The replacement was interesting as well. It was called Grammy’s Camper. It was clean, the AC worked but it smelled like a mortuary; I think Grammy may have said goodbye in it.

So we slept in Grammy’s, and we showered and barbequed in the $300,000. bathroom and kitchen next door with the burnt switch box.

On to the race. We had Race Mode passes thanks to my friends Kevin “Rocket “ Blanch and Brian Barnhart. So we got to go just about everywhere the teams went right up until the race. We were in the trenches and the grid as the teams were getting ready to go.

The tributes to Dan Wheldon were amazing. They handed out Dan Wheldon sun glasses and at one point told us all to put them on in honor of Wheldon, and there wasn’t a dry eye in the house.

The race was awesome, they had more lead changes then in the history of the race, and the last lap battle between Takumo Sato and Dario Franchitti was unreal. I was pulling for Tony Kanaan to win the race and with a few laps to go thought it might happen but that’s racing.

Monday we got on a flight with a bunch of kids who were all crying and screaming which made for a relaxing flight home. Then, right as we landed one of them blew chunks behind us and I was just happy to get off the plane before it started stinking.

Now we’re back home and it’s great to see the girls but I’ve also got to get ready for the next tournament at Toledo Bend. Looking forward to getting going again.