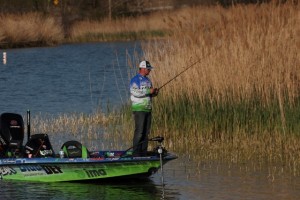 Postspawn can be frustrating, especially for someone like me who likes to cover a lot of water. This time of year means that female bass have gone out deep, and the male bass are guarding fry in and around the bedding areas. One of the ways to combat this time period is to slow down and fish them with soft plastics, but that’s just not how I like to do things.

I like to fish fast, I prefer to be able to cover water, especially when I know there is the potential for big bites on reaction baits, and that is exactly how I go after things in the postspawn period. My one two punch revolves around making a big presence on the surface, and following it up with a more subtle approach below the surface.

This is like when I’m targeting bedding fish, I’m not looking for a feeding bite; I’m looking for the protective instinct in guarding bass. Bass that are guarding their fry will dart out and protect their young from other things that want to eat them, the bluegill being the most common.

What I try to do is mimic the response of the smaller predator that is posing the threat on the fry. I like to start with the Ima Lures Roumba wake bait, and use my Pepper Jigs Fred Roumbanis Signture Swim Jig with a three-inch Optimum Bait Company Double Diamond Swimbait as a trailer.  If I need to use something that gets into the bottom a little bit, then I choose the Gene Larew Tommy Biffle Hardhead and Biffle Bug

Because I am trying to mimic bluegill, I choose the bluegill color Roumba to start with, and for the jig, I use a 3/8-ounce Gilly colored jig teamed with a Green Pumpkin Double Diamond swimbait. One trick I do with the Double Diamond is to use an orange bait marker and color the bottom of the bait and the tip of the tail to make it mimic a bluegill more closely.  I like the 7/16-ounce Hardhead with a Sooner Run or Green Pumpkin Candy; something that mimics a bluegill around bedding areas in gravel. 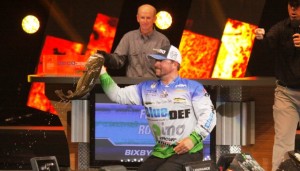 I want to make bass think there is a predator coming to get their fry, and it starts with the presentation. I always throw past the cover, then, with the Roumba, I hold the rod tip up at the eleven o’clock position, I reel slowly enough to keep a bow in my line; that is until I get close to the cover.

When the bait approaches the grass or the stickup, I speed the bait up slightly, then pause it over the cover attempting to mimic the response of a fleeing baitfish or bluegill. After the pause, I burn it for a few turns of the reel handle before returning to the original retrieve speed.

The swim jig is similar, but it is underwater, and I’m trying to move the bait a little quicker. Again, I cast past my target and at a medium speed; move the swim jig towards the cover a little faster. What I want to do is “crash” the jig into the cover creating a commotion to make the bass think the intruder is trying to get away. After crashing into the cover, I let the bait pause again, then speed it out of the cover trying to elicit a reaction strike.

The Biffle Bug and Hardhead are used when I’m fishing bedding areas that have little cover and more gravel or small rocks.  I reel the bait along the bottom and try to mimic a bluegill darting into the beds and make bass react to it.

The combination of these three lures have proven to be a great one, two punch for me in the postspawn. The Roumba allows me to locate fish quickly, and if they don’t strike it, the swim jig is an excellent follow up presentation around grass and suspended cover while the Biffle Bug and Hardhead make me efficient on the bottom. The overall look of  all of these lures give me the top to bottom look of  bluegill trying to eat the fry of a bass; and they really attract strikes.

These techniques create my postspawn triple threat, they’ll prove to be a knockout combination for you too.