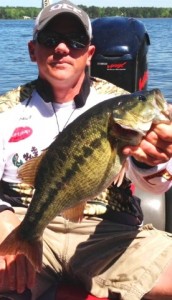 Editor’s Note – We rarely do event preview stories on Advanced Angler, unless it is for a Bassmaster Classic or Forrest Wood Cup.  Our charter is primarily about helping you catch more fish by working with the pros to have them share tips and techniques in a how to format.

However, with this being the week for the Bassmaster Elite Series Alabama River Charge in Montgomery, our friend Jim Hardy, who lives in nearby Deatsville, Ala. has a unique perspective on the Alabama River and Lake Jordan.

A hardcore bass angler, NetBait pro staffer and founder of Outdoor Friends Forever youth outreach, Hardy keeps up on the conditions and the fishing on his two favorite bodies of water, and he has the experience and understanding to help all of us have a better outlook on what to expect this week.

The best anglers in the world found the Alabama river on the first day of practice high and out of Its banks. But, by the first day of the tournament the anglers will find the river changed again, possibly lower and by the weekend the river could be at high levels again if the water from storms have started 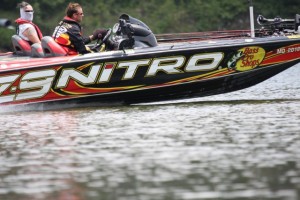 flowing.  If not, the river could be below normal to help make room for more water coming from the Coosa River chain of lakes above the Alabama River.  The truth is, that it will be hard to predict the water level but it will be moving daily.

The one good thing about that is this, it will provide these anglers with current which is a good thing for catching good limits of fish on the river.  But as water levels drop and current breaks and feeding areas for these bass will change daily and in some places on the river hourly.  What this means is that anglers will need to be focused each day to relocate their schools of fish.

Areas you will see most likely produce the best is extreme north end of the river in an area called “The Canal” by locals and “The Rocks” also locals terms when referring to two popular areas below Bouldin Dam and Jordan Dam, both of which release water from lake Jordan.  These areas in the last two months have produced many bags of spotted bass over 20 pounds, and one local tournament was won with a 23-pound limit of spotted bass. 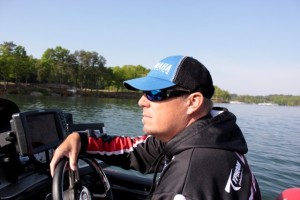 Techniques to look for in these areas may be anglers tossing swimbaits and crankbaits or a local favorite; slow rolling a one-ounce spinnerbait on the bottom in the current for some huge spotted bass.

In contrast to the last time any of the Elite anglers visited the Alabama River was in July for Toyota Trucks All Star week in the past few years.  The prevailing conditions were 100 temperatures, low current flows and with both of those factors included, low weights at the scales.  This time around will be different, you’ll see happy anglers with both mild springtime temperatures and higher catch rates of fish as both will be much more accommodating to the Anglers. 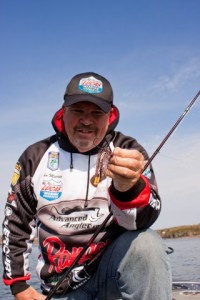 As far as the field, one of the anglers to watch for would have to begin with Russ Lane of Prattville, Ala. who has lived on this river his whole life fishing and winning tournaments for years; he’s likely going to be the man to watch because as the river changes he’ll be in the right areas at the right times.  Another angler to watch will be Kevin VanDam because it seems every time he’s been to this river; no matter the time of the year, he’s caught them well.  Then there is local angler Greg Vinson, from Wetumpka, Ala. has a ton of experience on the Alabama River, but he has also been fishing very well the past two events with Elite 12’s in both; confidence and experience could mean good things for him.  But, if you’re looking for the off the radar kind of guy, it’s got to be John Murray.  The last time here he caught them well and this tournament is setting up to be a good tournament for him.

Look for 15 to 17 pounds a day to win, but don’t be surprised if an angler weights a sack over 20 pounds.  This tournament should be a fun one to watch both for big spotted bass and largemouth.

Let the Alabama River Charge begin and get your popcorn ready its gonna be a good one!

To find out more about Hardy and his Outdoor Friends Forever Group Visit them on the web at http://www.outdoorfriendsforever.org or on Facebook