Our next guest in the Backstage Perspectives series comes from the tournament service yard. For those who don’t know, there’s a group of service vehicles and trailers you will find circled up in an area near the ramp at major fishing tournament series like the Bassmaster Elite Series and FLW Tour. The service yard is where the manufacturer service reps gather to assist their brand’s anglers with anything mechanical. It was there that I first heard her name; while interviewing a few anglers in the yard at Oneida back in 2013. 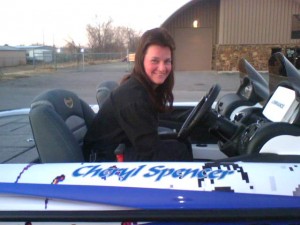 Cheryl Spencer in the Cockpit of her Triton Boat

“I’ve gotta go see this Lowrance tech, she’s a guru at setting your unit up for shallow water” I overheard an angler say. The ironic part is I am only about 50-percent sure of who I remember having had said it; I am however 100-percent sure that if I am remembering correctly, that person did then and still does now fish for a competitor. If that doesn’t speak to the quality of someone’s work I don’t know what does.

That sonar tech the angler was going to see turned out to be Cheryl Spencer, the Tournament Support Agent & Event Coordinator for Navico the parent company for Lowrance, Simrad, and B&G – And our next guest on Backstage Perspectives.

She’s been described to me as avid outdoorswoman and tournament angler; but even more so as a kind, generous, and hard working person. Someone who is far more interested in making things better and right for everyone then she is her own gain.

So here it is… Backstage Perspectives featuring Cheryl Spencer of Lowrance:

MF: What is your earliest memory of fishing?

CS: I guess was about 6 years old, and my mom started taking me fishing. We had a little boat and would spend the day fishing for bass; then in the evening we would sit on the bank and catch catfish. 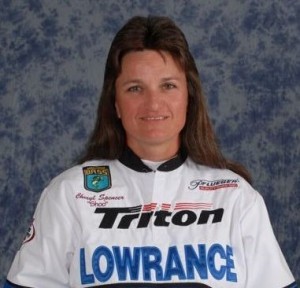 MF: How did you get started working in the fishing industry?

CS: That’s kind of a weird and interesting story actually. When I was 16 or so, the high school I went to was more or less across the street from the old Lowrance building in Tulsa. Not knowing what Lowrance really was at the time; I told my mother I

was going to retire from that company someday, and pointed at the building. So she asked me if I even knew what that company was and I said no, but it looks like some place I want to work. Now this was when I was 16 and at the time we weren’t even using electronics; we were fishing out of a little john boat or from the shore and didn’t have the need.

Almost 20 years later; I’ve gone to college for communications and am working in television at the traffic department of a station here in Tulsa. All of my vacation time I would spend on the road with a turnkey event company that did sporting events

for ESPN, Cox Cable, and a multitude of other various TV stations. I was always within the sporting industry and would still fish when I could.

One of the people I worked with at a few of the stations happened to be the wife of the marketing director at Lowrance; things were changing in the TV industry and He asked me to come work for them and I consistently said no for about three years. Then one day he called me again and said, “I really really want you to come work for me in the marketing department.” So I asked him doing what and he said, “We’re going to create a position for you.” I asked him doing what and he said, “a whole bunch of different things; I heard you are very skilled at multitasking and extremely detail oriented and I’d really like you to come work for us.”

It wasn’t till that moment – in which I realized what company it was; the company I said to my mother all those years ago I wanted to retire from. So, it all came full circle if you will, and I accepted a job in the marketing department at Lowrance. That was in June of 2004 and I’ve been there in one capacity or another since.

MF: You currently work in tournament support at Lowrance, what responsibilities and roles does that job entail?

CS: I actually have two job titles that I fill in relation to this. From the Tournament Support aspect it entails traveling to the Bassmaster Elite Series, FLW Tour and Major League Fishing events with my service trailer. While there, I troubleshoot any issues and fix or replace any equipment that the anglers need worked on.

My other job title officially is as Event Coordinator which involves being the first line of contact for any of our national pro-team anglers or general prostaffers throughout those events. That means handling everything from the prostaff discount programs and sponsorship needs, to working the booth at the expos we attend. Sometimes that can make it difficult for me to be over at the trailer in the service yard but thankfully we have a wonderful team of prostaffers at Lowrance that I’m able to call on to come help work the booth and give me the opportunity to make it all happen at once. 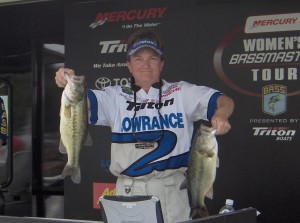 MF: Consensus is that being a tournament angler yourself has played a major factor not only in your customer service process, but really in your success as a service agent. How has being a service agent at a sonar company affected how you prepare for and fish a tournament?

CS: It’s reinforced the importance of simply finding the fish. Through the sonar knowledge that I’ve gained over the years. It’s one thing to get the fish to bite the bait you’re throwing but if you’re not in an area with fish there won’t be any to get to bite anyway. So, tournament wise, I’m more just searching for fish then trying to catch any during pre-fish. Also, being around the top pro anglers you can’t help but pick up things from them as well when working with them and their equipment.

MF: Sonar and fish finding units have come extremely far in the last decade. Where do you think the technology will take us next?

CS: I think right now it’s not so much the underwater technology that will be the focus going forward. It seems like more of the companies are focusing on mapping; specifically contouring line, and exacting structure and bottom make-up separation refinement. So, in the mapping, if they have better detail in or more information in the map capable of being used on those electronics; then the anglers will be able to research more off the water than in the water. Live sonar units these days image wise are all pretty advanced with forward, side, and down imaging all coming together; and there have been major refinements in things like separating fish from structure and even from other fish in a school. But, I feel moving forward that it’s going to be a mapping scenario more than a live underwater focus anymore.

MF: If you couldn’t work in the fishing industry what job might you have today?

CS: It would be back in television, but on the production side. I spent a lot of my time in TV around paperwork and details. Also, I’d be dealing with all the advertisers and making sure the media that was going over the air was proper. So, this time around I would want to be working in post-production and/or videography out in the field; editing footage and creating the actual product.

MF: You fished every event of the Womens Bassmaster Tour (WBT) during its existence… What single memory stands out the most?

CS: I would say when Sheri Glasgow won her AOY and second to that would be when Pam Martin-Wells won hers. They are two women that I look up too in the fishing industry and their accomplishments. Pam making and fishing in the Classic was 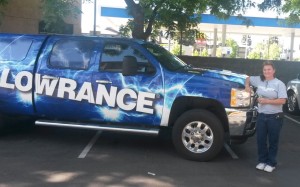 huge. It was the year after Sheri had one her AOY title that they opened up that Classic slot to the WBT AOY. I was a little disappointed that she didn’t get to be that person; but I’m happy Pam was… And did it!

MF: What is your favorite part of fishing tournaments?

CS: Figuring out the puzzle. It’s not so much about the finish or the money for me. I’m more interested in figuring out the puzzle and finding the fish. I pride myself on how well my co-anglers did while I was a pro. A very large percentage of them finished in the money and the top 12 and that was always important to me. Now, in turn I didn’t do so well at actually catching the fish myself sometimes; but I’ve always been really happy to know I did right by my co’s and put us in the right place to have an opportunity to win by finding the right fish on a consistent basis.

MF: Aside from bass what other species do you like to catch when fun fishing?

CS: I love catching Crappie. I’m not so much a spider-rig and troll kind of person though; I like to catch them out of brush piles while target casting. Trolling is boring and unsporting to me. I’d rather sit and wait on a fish to try and make them bite my lure than just troll around and wait for a strike to just occur.

MF: What bass fishing technique is your least favorite and why?

CS: That’s kind of a two in one, but I would say anything that you have to throw on a spinning rod is definitely one. The other is probably crankbaits; that’s got to be the worst of the two. From getting hung up, to getting stuck by the trebles when you try to lip a fish; it’s just annoying. So anything with trebles is my least favorite. 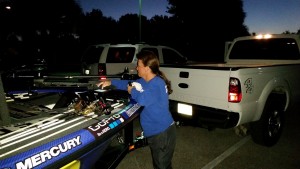 CS: Someone to be stuck with.

CS: Jim Coulson, he taught me everything I know about tournament fishing. I’d also like to thank my mother Lois for getting me involved in the first place.