12/6/2011 – There are times that a fishing lure or technique comes to the surface that dominates the fishing landscape. When word of the Chatterbait hit the wires, anglers everywhere were clamoring to get their hands on one of the bladed swim jigs. Then, Steve Kennedy blasted them at Clear Lake on a pair of swimbaits, and before you knew it, the Basstrix Paddletails were being exploited on the Internet by individuals and dealers alike.

While the availability of the previously mentioned lures and the subsequent response of dealers that were able to obtain them created a firestorm of controversy. The Alabama Rig has not only had its share of retail controversy, but a philosophical one as well.

The Alabama Rig started surfacing mid-year with a series of YouTube videos by the manufacturer, but the rig remained largely unknown. Then, October rolled around and the FLW Tour Open schedule made its fall stop on Lake Guntersville in Alabama. 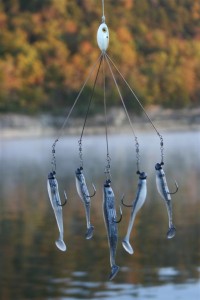 Paul Elias, the 1982 Bassmaster Classic Champion and current Bassmaster Elite Series pro; who happens to hold the Bassmaster record for the heaviest four-day weight; made The Alabama Rig famous. For four days in October, Elias caught 102 pounds, 8 ounces and came within four pounds of claiming the FLW Tour record as well.

He won the event in wire-to-wire fashion, and in doing so, made the Alabama Rig a household name in the fishing industry.

Lure companies jumped to try and re-create the rig, soon, dozens of copies would arrive on store shelves and Slick Lures; the originator of the rig would soon reach an agreement with Mann’s Bait Company to market the product and periphery products.

On the flipside, a new kind of firestorm started.

Some felt that the rig would mean that anglers would be able to catch faster limits; which would mean that more bass would be taken from the waterways putting extreme pressure on the fishery, resulting in a depleted population as meat eaters took home their catch.

While others began to worry about how it would appear to the general public to see pro anglers tossing Alabama Rigs on the lake instead of single hook lures. The Internet became abuzz with concern over how The Alabama Rig could affect the image of our sport. 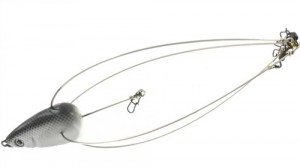 The fact is; The Alabama Rig has created a conversation about tackle again. Manufacturers are working to develop their own versions and other companies are frantically working on peripheral tackle; lures, rods and even storage options are being discussed.

What does that mean to the industry? The bottom line is that it creates sales through tackle stores, and unlike a win with a traditional lure, The Alabama Rig has benefitted companies across the board. Anglers who purchase an Alabama Rig will have a need for jigheads, swimbaits and potentially a braided line or even a rod and reel combo.

The effect on the industry has been something that it has needed for quite some time – anglers are excited about buying tackle again. The “magic lure” that every angler believes makes such a difference in how they finish in a tournament has been discovered again, and they began frantically searching for their own Alabama Rig.

As far as meat fishermen are concerned, the everyday person who uses fishing as a means of feeding their family has not proven to be a reliable purchaser of tackle other than sinkers, live bait hooks and bobbers. The thought of them spending $50 to $75 on an Alabama Rig and the lures necessary to fill it doesn’t seem likely; especially when they can buy a dozen minnows for less than $10. When you factor in the need for specialized rods, reels and line; The Alabama Rig continues to look more and more like a tournament angler’s weapon.

But, the Alabama rig is not for everyone only because of the price or the accessibility of the tackle to throw it. Some states regulate the use of the rig by limiting the number of hooks that can be used on one lure at any time.

Finding which states allow the use of The Alabama Rig takes time to research, we’ve found some of them, and will try to locate regulations for more of them in the near future. (These findings were completed with a simple Internet Search, and were not researched with the individual states. For exact findings, please contact your state’s Game and Fish Department).