12/8/2011 – If you were to poll bass anglers, the overwhelming majority would likely claim a topwater bite as one of their favorites. It wouldn’t be hard to imagine a bass angler sitting in his living room recliner in December, waiting to go fishing. The chances are that the daydreams involve topwater baits at some point.

Ish Monroe, the Bassmaster Elite Series and FLW Tour Pro from Hughson, Calif. is an avowed shallow water junkie. With that in mind, topwater is always a part of his program. Did I say always? I did.

Monroe is such a believer in topwater baits that he keeps one at the ready any time his Ranger is in the water – and that includes the winter months. “A bass will take a look at topwater baits in cold water,” he said. “It may not be the approach I take when trying to catch my limit, but it is definitely something I can get one or two bites to put me over the top.” 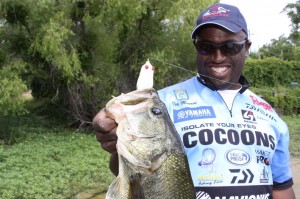 Monroe said that he has a plan for including topwater baits in the winter, and a series of lures that he turns to in order to try and get a big bite. He also revealed that he has caught topwater fish in water as cold as 47 degrees, so he knows they work.

Bigger is Better
Monroe said that size matters when thinking of topwater fishing in the cold weather. “Remember that I am looking for one or two bites, so I don’t want to waste my time with a small profile bait,” he said. “I want a big, slow moving plug that makes a giant fish believe she is going to get a big reward for her effort.”

With that in mind, the Hughson, Calif. pro turns to one of four baits, and they all have a profile to create big strikes. His first choice is a Rover 128 by River2Sea. The Rover is a big walking plug that can be worked fast or slow, but makes a commotion either way. Tied with the Rover, but for a little different scenario is a Snag Proof Phat Frog; he likes this around weeds and trash pockets. He chooses a buzzbait if there is some chop on the water from wind, and finally, if the bait is smaller or the conditions are slick; he goes with River2Sea’s Bubble Pop 88, a lager than average sized popping bait.

“All of those baits have a profile that produces big bites,” he said. “If I’m going to commit to a topwater for one or two extra bites, then it has to be worth my while.”

When?
Monroe said that he can’t put an exact time when the water temperature and the sky conditions are perfect for topwater bites, but he has a few things that he considers when trying it. “I have to have a limit,” he said. “If I’ve gotten to where I think I can through conventional wintertime tactics; it’s time for a gamble.” 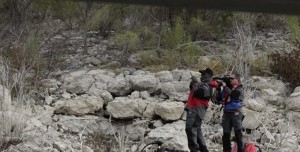 When he reaches that point, Monroe said that he looks for things that will help tip the balance in his favor. If the afternoon sun causes the water temperature to warm a couple of degrees, bass might become more active and if that occurs, they might chase a perceived forage item on the surface.

He also looks for rocky bluffs that will hold bass year-round. The sheer walls offer quick access to deep water as well as ready access to shallow water feeding areas. He also added that the rock walls retain more heat than everything else in the lake. If he comes across a trash pocket, something that is full of weeds or laydown trash, he looks around there as well.

“The truth is that bass will eat topwater at any time of the day, all year long, depending on the conditions,” he said. “Every once in a while you’ll see a bass chase a baitfish near the surface, and it doesn’t hurt to throw at it those fish anytime they do that; you never know, it might turn into a bonus fish.”

Gear
Monroe uses the same combo for the buzzbait, Bubble Pop and the Rover, but he switches it up for the Phat Frog. He selects a 7’7” medium action Daiwa Ballistic composite casting rod, which he pairs with a Daiwa Zillion with a 6.3:1 retrieve speed and 40-pound-test Daiwa Samurai braided line. He pumps up the power for the Phat Frog, choosing a 7’4” Daiwa Steez Frog Rod, a 7.3:1 Zillion Type R reel and 55-pound-test Samurai braided line.

“The composite action of the rod for the other three baits is a perfect match, but I still need the power of the heavy action to drive the frog hooks home,” he said. 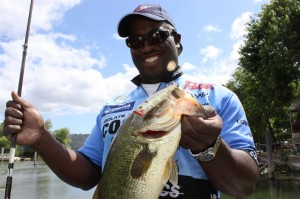 Slow
The one piece of advice Monroe wanted to make sure anglers understand is that topwater in the wintertime is not a cover the water type of technique. In other words, he said to keep it slow – very slow. “You’re not trying to burn bank and find active fish with this,” he said. “You’re trying to find big, isolated, resident females up in the water column enough to entice with a topwater bait; if you move too fast, they’ll ignore it.

“Try to twitch the bait and pause; then pause some more,” he said. “If you give it time, you might just be able to get one or two bites in an unconventional way for this time of the year that can change everything. I’ve done it into December, and they have always been good ones.”