In 2011, when Advanced Angler launched, we decided to revisit some of the winning patterns of past Bassmaster Classic Champions.  For whatever reason we started with 1995 winner Mark Davis, and ended with 2007’s Champion Boyd Duckett.  We had inteded to get all the way through to 2010, but didn’t quite make it.  Now, with the precise amount of days available leading up to the 2014 Bassmaster Classic Media Day, we have decided to bring back those articles and add the five years we have yet to run.

For those of you who have been readers of Advanced Angler since our January 3, 2011 beginning, this may be a rewind of a rewind.  But, to those of you who have joined the party in the past two years, this will be the first time you’ve seen them.  Thank you for reading, and please, take a trip down memory lane and visit 1995 Bassmaster Classic with Davis along with the rest up to last year’s Champion Cliff Pace.

Rewind
The 1995 Bassmaster Classic proved to be the most historical Bassmaster Classic to date.  Even with the fact that Federation Nation Angler Bryan Kerchal won the tournament the year prior on the same body of water; 1995 was special.  The eventual winner turned out to be the reigning Bassmaster Angler of the Year Mark Davis, from Mt. Ida, Ark.; it was the first time that the two titles had been won by the same angler in the same season. The 1995 Bassmaster classic was also the 25th anniversary of the event.

The Winning Pattern:
Davis started the event on a completely different pattern than what he eventually claimed victory on.  His first morning of the tournament was spent throwing a Rebel Pop ‘R topwater bait.  Had he caught his full limit on the topwater, his winning pattern may not have been used.  “I caught a keeper on my first cast, and my four fish of the tournament on topwater,” said Davis.  “After my topwater bite went way around noon on the first day, I went looking for a fifth fish.”

Davis sought out some deep brush piles that he’d found during the pre-practice scouting period six weeks prior.  “I started out throwing jigs and worms but didn’t get any bites,” he said.  “When I picked up a Citrus Shad colored Bomber Fat Free Shad and cranked it through the brush, I caught a five pounder, and lost another one.”

This turned out to be Davis’ first pivotal moment in the tournament.  He reported throwing his crankbait on 12-pound-test line on that first day, but his fighting with the snag, and the fact that his bites were coming at the top of the brush piles gave him the ability to go to heavier line.  “After the first day, I made a switch to 20-pound-test, and that would come into play later in the event,” he said.

He ended the first day of the tournament in 13th place.

The next day, Davis ran back to his topwater fish, but after getting no strikes by 8:30AM, he went to the brush piles.  However, his

crankbait pattern from the day before produced disappointing results as well.  “I hadn’t triggered a bite after making repeated casts with the crankbait,” he said.  “I picked up my one-ounce Strike King Po Model spinnerbait, and made a cast to the opposite side of the brush.  I found my best pattern by dumb luck.”  He chose a white head with Blue Glimmer Skirt and a pearl colored trailer; he also downsized the blades for fishing in deep water.

When he was slow rolling his spinnerbait through the brush, he felt like it was going to get hung up, so he reeled it faster to break free from the snag.  When the bait broke free from the brush, he stopped the retrieve and allowed the bait to fall; a five pounder struck it.  “I caught close to 20 pounds on that spinnerbait that day and was able to move into contention in third place behind Mark Hardin and Mickey Bruce.”

He began the final morning of the event and once again, he counted on the spinnerbait.  After it had produced a limit, he went looking for one more fish to replace the small keeper he still had in his livewell. “I decided I needed one more good fish to have a shot at winning,” he said.  “I changed back to the crankbait and lined up to make a cast on what I hoped would be the perfect line.”

He made a cast and began his retrieve over the top of the brush, and when he did his burn and kill, he got a strike.  He set the hook, and felt a heavy fish.  “I told my press observer that it felt like a good one, better than anything I’d caught yet in the tournament,” said Davis.  “I kept pressure on it, and when it came to the surface, I saw I had

two fish hooked; a four pounder and one about two and a half.”

Once he had the bass on the surface, he started winching the pair towards the boat hoping to keep them from coming off as they struggled against each other.   “As they got closer to the boat, I decided to use their momentum to try and swing them in the boat,” he said.  “I started to swing them, and as they cleared the water, they both came off the hooks.”

As both fish were tumbling through the air, free from the hooks, they came into contact with the gunnels of the boat; the smaller one falling into the water; the four pounder onto the floor of his boat.   “Call it luck, destiny or whatever you want to call it, but that’s the way it happened,” he said.  “I culled that little fish and weighed 16 and a half pounds and won the tournament.” 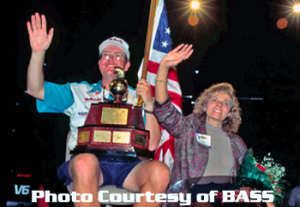 “I didn’t know how much it would make a difference in my life, but it did,” Davis said.  “I was 31 at the time and had been at it for a while.  Knowing how difficult it was to make it in the sport before, I had no concept of the change it would make going forward; through my whole career.”

“The title of Bassmaster Classic Champion is something they can never take away from an angler; it’s something we’ll carry with us for the rest of our lives,” he said.  “I wish every angler in the world could experience for themselves just one time.”