Steve Scott–Lurch Onto the Scene

You’ve seen him before, but you may not really know who he is.

Every sporting event has its moments of drama and events that occur throughout the event that define the outcome of the day. Some of those happenings are obvious, and others are a little more subtle that require being presented to the fan.

A good host of a sporting event is someone who can help create a bridge from the action on the playing field to the fan. The ability of the on air host allows his knowledge and his vision to enhance the entertainment value of the viewer. As sports fans, we can often relate our greatest memories of moments to great television commentators and the calls they relate. 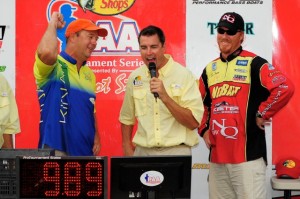 To be a truly great commentator, one has to immerse himself in the sport he’s calling, and he has to remain professional, while interjecting a bit of the fan he has inside to enhance the natural excitement of a great play or a win.

Bass fishing has had its great commentators and hosts, and one of those men who throws himself into the sport with passion is Steve Scott. Known as “Lurch” to his friends, Scott has built a career with a microphone that not only has made him one of the best in the business, but it has made him a fan as well.

Bass Fishing and More
Scott was first introduced to bass fishing when he grew bored of his hobby at the time; remodeling a starter home. “I had finished three or four of the rooms myself and realized I needed another hobby,” Scott said. “I had fished with my grandfather, so I decided to pick it back up.”

After deciding to pick up his rod and reel again, he headed to a local book store and picked up a copy of Fishing for Dummies and decided to try his hand at angling. When a friend of his, who had done some announcing for the Bassmaster Western Invitationals asked him if he would be interested in doing the Central Opens; he said yes.

“I was all set to do the Invitationals, but they wanted me to come to an e50 event so that I could meet the people and get accustomed to the way things ran,” he said. “When I got there, I found out that the DJ had come up sick. When they asked if anyone knew how to do it, I told them I had done it in the past, so I did it.”

When the final day’s National Anthem singer got sick, Scott did that as well. “A General Manager of B.A.S.S. came up to me afterward and told me that I had balls,” he said. “So he had me come to The Bassmaster Classic in 2004 and do whatever they could find for me to do.”

That event would see him provide coverage for the Classic that was won by Takahiro Omori as well as the Youth Bassmaster Classic. After that, he would do more B.A.S.S. events, The P.A.A. Series, The Monster Energy AMA Supercross F.I.M. World championships and lately, The Jack Links Major League Fishing Challenge Cup presented by Busch Beer.

More to Lurch than Meets the Eye
At first glance people would assume that Scott is a television host; which he is. But, there is more to him than one would know if they didn’t ask. “I’m a union plumber during the week,” he said. “On Monday through Thursday I work on jobsites, then on Friday morning I fly out to do the AMA Supercross events; I’m home by Sunday night and on a job site Monday morning.”

People ask him why he does both jobs when he is obviously so good at commentating and hosting. “I’m young enough that I can double dip,” he said. “I work the job sites for the base and my benefits, then do the other stuff because it’s fun, and I like doing it.” 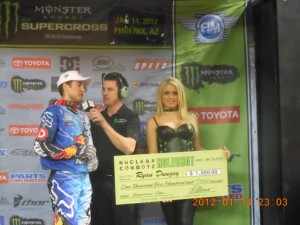 He got into the motorcycle world when he broke his back, and a friend asked him if he wanted to judge a freestyle motorcycle event. That would lead to covering Freestyle Motocross abroad and the chance to work more in television. “I really like being the carnival barker at Motocross events,” he said. “But, I’ve really come to love the people in bass fishing. they are a great group of blue collar people who have made their dreams come true; and for the most part, they live life and do their jobs with passion.”

The Latest Step
His latest career move was to sign on with Major League Fishing to be the host of The Challenge Cup presented by Busch Beer. When he saw what Major League fishing would be, he thought it was an opportunity to be around a group of people he liked. But, when he arrived at Amistad and got to be a part of the first day of competition, he knew it was more than just a nice outing.

“Major League Fishing was interesting because it gives us a whole new look at the way the anglers get to the point that we see them on other fishing tournament shows,” he said. “This format really challenges them and makes them have to think their way through problems, but the fact that they are communicating everything in their head to a camera; it gives us all a unique perspective.”

Being a fan of the sport, Scott said that he found himself engrossed in what was happening on the water while he was with the producers on the set at the Diablo East takeoff. “I kept refreshing the iPad to see what had changed in the last few minutes,” he said. “Not only did I need to know what was going on in order to do my lead ins for the camera, but I found myself really wanting to know too.”

What He Liked Best
Scott said that he enjoyed the new format because of the effect that it had on the anglers. “I’ve worked with a lot of these guys in the past trying to help them communicate their minds better for the fans, but I think that MLF really forced them all to push further,” he said. “The whole format of the show is to keep them as off balance as they can be – and then we stick a camera in their face – it helps them voice more what’s happening as it happens.” 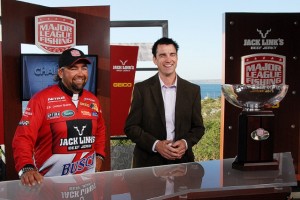 Having the anglers outside of their normal competitive comfort zones was something that he believes added to the drama. “Because they had no information on the Lake, and didn’t know where they were fishing until the night before, they were all really intense,” he said. “It was like we threw a fighter into the ring and hit him with a haymaker in the jaw before turning him loose to start the round – they were all trying to keep their heads straight.”

It also changed the way that the anglers have been trained over their whole careers to fish. “These guys are conditioned to put five fish in their basket and then try to replace them with five better ones,” he said. “Major League fishing cut a hole in their baskets and told them to keep fishing; not having a limit meant that they could never fill the bag – that was something they had to get used to.’

He also believes that Major League Fishing has a chance to create new excitement in the sport of fishing. “I liken this to Boxing versus UFC,” Scott said. “Boxing is good, and fun to watch. But, UFC brought a whole new level of excitement to televised fighting. MLF has the potential to allow the fans to get more excited about what they’re seeing on the screen.

“We really tried to show that intensity while we were filming, and if it comes across even a little, it will be successful.”