Rewind
Lake Logan Martin of Alabama was the site of the 1997 classic and was held during the dead of summer in late August. Lake Logan Martin holds both largemouth and spotted bass and most competitors brought in mixed bags of fish. The predominant patterns were flipping docks and throwing shad colored crankbaits on river ledges.

The Winning Pattern:
Dion Hibdon used his knowledge of dock fishing on the Ozark lakes to edge second place finisher Dalton Bobo by the slimmest margin in Classic history. Hibdon’s primary weapon was a small spider jig that he skipped under docks armed with light line and a spinning rod.

In practice Hibdon had located numerous schools of fish out deep and had his mind made up that those were the fish he needed to target for a shot at the Classic title. “I expected to fish deep; I found drops and humps off shore that were loaded with fish,” Hibdon said.  “But, as the tournament approached we got a lot of rain and anytime you have spotted bass and rain those fish are going to suspend and suspended fish can be tough to catch.”  This realization led Hibdon to start searching shallow water docks where he found small limits were easy to come by; still he thought the deep water bite would be the only way to win.

Hibdon setup shop out deep on the first day, but at noon he only had one small keeper to his credit.  His observer, an outdoor writer from Rhode Island, grew impatient and questioned Hibdon’s pattern. “I thought you said you could catch an easy limit up shallow?” the writer quipped.   Hibdon knew he could, but figured doing so would be conceding the classic.  Nonetheless, he moved into shallow water and caught a limit for a little over ten pounds that fell for the spider jig skipped under the docks; but it wasn’t until day two that he would need his spinning rod. 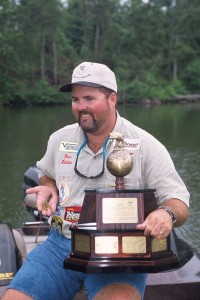 Surprised by the quality of the shallow fish as well as the ease of catching them, Hibdon started shallow on day two.  However, as the water continued to rise the space between the dock and the water line shrank.  “The first day most of the skips I made could be easily accomplished with a casting rod but many of my competitors had the ability to place their bait in the same spot I did,” he said.  “The more the water rose, the harder it got to get a bait back to where the fish were. That’s when I pulled out my spinning rod and went to work.”

At the time, such an act was considered revolutionary. Even the analysts remarked about how odd it was to see a bass fisherman using unconventional spinning gear. His strategy was to present the jig to fish that no one else was able to reach. He accomplished this by skipping the jig 10 to 12 feet back under docks that offered only six-inch gaps above the water.

Whether it was fear of other competitors or a hunch that the better fish remained out deep, Hibdon went after the deep fish one last time. “You know, I caught my day two limit and spent the second half of the day out deep again,” he said he threw just about every rod in his boat.  “I tried every bait I could think of and couldn’t get a single one to bite; that’s when I decided I was done fishing deep water.”

Hibdon stuck to his guns on day three.  “The shallow water docks just had easier fish to catch, it was that simple,” he revealed.  He continued to skip a spider jig under docks that no other competitor could reach. The water continued to rise and the shallow bite got better.  However effective his light line technique proved to be, it almost cost him the classic as he broke off two good fish during the deciding hours.  Still, he managed a solid limit of fish.

The weigh in provided some tense moments as Bobo pulled out one of the better limits of fish weighed throughout the week.  As Bobo placed the fish on the scales B.A.S.S. Founder Ray Scott offered the opinion that Bobo was going to take the lead.  However a four-ounce dead fish penalty cost Bobo the title and the $100,000 winner’s dollar purse.

Wrap Up:
Growing up, all kids have a hero. Young boys’ heroes are usually one of two people; their sports idol or their dad. Dion Hibdon’s was both. As a child, Hibdon spent countless hours on the water of the famed Ozarks region with his father Guido.

As his father’s prowess in bass fishing rose, young Dion knew he wanted to follow in his footsteps. Unlike other professional sports where your last name opens a lot doors, genealogy doesn’t guarantee you a thing in bass fishing. Great fishermen aren’t born; they are made with hard work and determination.

As the younger Hibdon cut his teeth on the B.A.S.S. tour he dreamed of a day he would win the Bassmaster Classic. In 1988, three years after joining the pro ranks, he had his first shot at making that dream come true.

When it was all said and done a Hibdon was the 1988 Bassmaster Classic Champion, Guido Hibdon that is. It wouldn’t be for another nine years that the storybook ending came true for Dion Hibdon winning the 1997 classic and etching the family name in the history books.

They became, and still are, the only father and son to each win a classic. As Dion’s son Payden embarks on his rookie season of the FLW Tour, he becomes the third generation of Hibdon we may soon be etching a new Hibdon name on the industry.