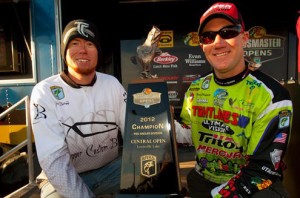 The 2013 Rookie Class among the competitors of the Bassmaster Elite Series schedule present a heady group.  With names like Jason Christie, Clifford Pirch and Kevin Hawk among the field; the Rookie of the Year race is sure to be a tight one.

But, to categorize those names as “pure” rookies is a misstatement.  The truth is, Christie is a five-year FLW Tour veteran with eight FLW Outdoors wins to his credit, one of them being a tour level win on Lake Hartwell in 2011.  Pirch is also a veteran of eight FLW Tour campaigns with two tour level FW wins and Hawk is the 2010 Forrest Wood Cup champion with two full FLW Tour seasons under his belt to go with it.  In terms of the Elite Series, they are rookies, however, they are hardly untrained in the occupation of “professional angler.”

Each year, there are true rookies that join these anglers who migrate to the Elite Series; or in the case of Christie, fish both tours.  One of those rookies is Josh Bertrand of Gilbert, Ariz.

We thought we’d take some time, find out who Bertrand is, and see what his goals for the year are, how he prepared and then follow up with him after the first two events and see what he thinks after that.  Before we get to know him as a person, let’s look at him on paper.

Bertrand by the Numbers
Bertrand’s FLW and B.A.S.S. record book is certainly in its first chapter of being written.  With six Bassmaster and eight FLW entries under his belt, the 24-year-old pro is certainly early 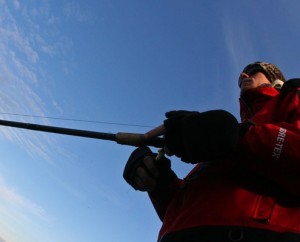 in the construction of his career as a professional.  He does have significant experience in the Western competitive circuits; like WON Bass, to go along with the National organizations as well.

Don’t let the brevity of his entries fool you, the Arizona angler has earned some impressive credentials.  In his second year competing on the Bass Pro Shops Bassmaster Central Opens in 2012, Bertrand finished second in the season opener in a tie-breaker with eventual Elite Series AOY Brent Chapman, then went on to win the points championship qualifying him for the

In his eight FLW events, Bertrand has managed two top 10’s; including a second place finish at the Lake Roosevelt Everstart Western Division event the same week that the Bassmaster Classic was being contested on Grand Lake.

While his record book may be brief, it shows that he is capable of competing.  But, even with some success early, don’t think he is a young gun that is overconfident; he has a respect for what he is about to embark on.

Preparing
Even with his early career successes, he knows that he has some work to do to become one of the top anglers in the business.  “I know I am going out there to fish against the best in the business,” he said.  “I’ve got to go out there with a mindset to being competitive.  I can’t expect to go out there and be among the top level right off the bat, but I want to put in my dues and become one of those guys eventually.” 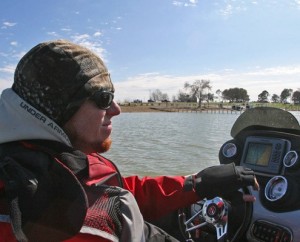 With that in mind, Bertrand spent much of his offseason preparing himself for everything from sponsors, to  getting his gear organized to a little bit of scouting.  Bertrand said that a good friend from Arizona, Gary Key, had given him some advice that helped him get ready in time.  “Gary qualified for the Elites a few years ago and couldn’t line up the support to go out there,” he said.  “He encouraged me to start doing my research after the second event of the Opens schedule when it looked like I would qualify, and he was right.”

When the time came, and he won the Central Opens point title, he had a list of companies to talk to that helped him build a support team.  “Rigid Industries came on board right away, and their partnership allowed me to commit right away,” he said.  “Then Knight Transportation, Smokey Mountain Tobacco Free Snuff and Hatch Toyota really helped me feel great about being able to do it this year.”

While all of the sponsor business was going on, he took the time to visit the first two venues of the season, The Sabine River and Falcon Lake with a friend.  “I just drove around as much as I could,” he said.  “I pretty much put my buddy to sleep, but I needed to be able to navigate the waters without trying to do too much during the practice period.  I’ll try to visit some others along the way as well.”

Then, he spent hours upon hours organizing gear and tackle in his garage  “I pre-ordered all of my Temple Fork Outfitters Rods, my Abu Garcia reels, line and bait,” he said.  “I need to be able to move stuff from my Tundra to my Nitro Z9 quickly, and to be able to do that, I need to know where everything is.”

Strengths to Build On
Being from the West, Betrand said he feels like he can do just about anything he needs to in order to catch fish.  Though, he knows he needs to work on things in order to get better.  “I’d say my primary strength is clear water, because of where I’m from,” he said.  “I’ll have to work on fishing some of the rivers and dirty waters more, but I’m really excited about the schedule and the lakes that feel like they’re up my alley.” 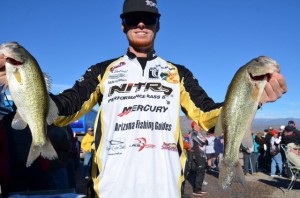 The other thing he has in his corner is the support of friends on tour.  Like he has done for many of the West’s young pros, Phoenix, Ariz. pro John Murray has been giving him advice along the way, Pirch, from Payson, Ariz. is going to be his roommate on the road.  “Those guys have been invaluable to me in getting things started,” said Bertrand.  “I really appreciate everything they’ve done, and continue to do to help me.”

Goals
Bertrand has broken his goals into sections for the year, and his first goal is for the first half of the season.  “I really just want to get out there and learn to be competitive with this group,” he said.  “I feel that if I focus on my fishing, and not the results, that I will better earn what it takes to do that out here.”

Secondly, he hopes to cash enough checks to break even on his own investments for the year so that he can come back for his sophomore year.  “I’ve heard that there is a learning curve, and that things become a little easier in year two on all sides of the business,” he said.  “I really just want to finish in the top half of the field in the points, and make enough to continue into next year.

“This is what I’ve wanted to do since we moved to Arizona from New Hampshire and I fell in love with bass fishing,” he said.  “I want to take my experiences in competition from home, and build on them out here.  I’ve been able to do that in the Opens so far, and hope that I can continue to improve as I go.”