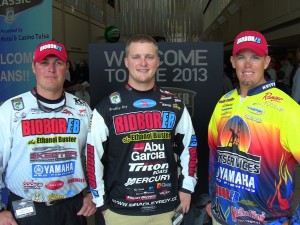 The Roy vs. Crochet rivalry originally began with their chase for the 2010 Rookie of the Year title and continued in 2011 and 2012 with the Biobor EB® fan fishing contest. Now, for the 2013 Season we are adding a new member to the mix. Biobor® sponsored Elite Series PRO’s Bradley Roy and Cliff Crochet will be joined by another Biobor® Elite Series PRO Keith Combs. Last season was exciting, but hang on to your fishing rods, now all three are seasoned veterans and ready to do Biobor® Battle.  Who will walk away this season with the most weight per tournament? Who will be the lucky fan who picks the winner? This, and more, is coming to you from the Makers of Biobor EB®.  “PREPARE FOR BATTLE”.

In Each Elite Series event in 2013, fans can win prizes valued at over $100 including; two 16oz bottles of Biobor EB®, a Biobor® t-shirt, Biobor® hat and a Biobor® Koozie.

At the end of the Elite Series Tournament schedule, all the winners will be placed into a drawing where one lucky winner will get a day on the water with the Biobor® Pro closest to their home location.

Fans can cast their votes at www.biobor.com/contest until noon on the first day of each event.

The winners for each event will be the fan who predicts the highest place finisher of the three and his weight for each Elite Series Event. In the event of a tie, the first person to cast their vote will win.

All three anglers will hand out 2 oz. samples of Biobor EB® to fans at each of the Elite Series events and will run Biobor® wrapped trucks. Combs and Crochet will have Biobor® wrapped boats.

Combs, Roy and Crochet are excited about the expanded relationship with Biobor®.  “To have a sponsor that provides a product all anglers need is great,” said Crochet.  “No one should run their outboard motor without adding Biobor EB®.”

Roy added “Biobor EB® helps my engine perform to its maximum potential.  I want a handle on any and all variables under my control.  With Biobor EB® I can focus on catching fish and getting them back to the scales.”

“As a tournament fisherman, having reliable equipment is as important as or more important than finding or catching fish. By running Biobor® products, I know I have a huge edge over my competition,” said Combs.

Hammonds Fuel Additives, Inc. CEO Allan Hohman is proud of how the three anglers represent Biobor.  “I greatly respect what Keith, Cliff, and Bradley and all the professional anglers do.  These three guys have proven to be great ambassadors for both their sport and for our company.  They have spread the word that protecting outboard motors from the harmful effects of ethanol with Biobor EB® is a must.  I wish them well in 2013 and I am excited about the growth of their careers and the continued growth of our company.”

Biobor EB® is formulated to prevent the separation of ethanol/gasoline fuel blends, which helps combat the negative effects of ethanol in fuel tanks and engines, while increasing engine performance, efficiency and fuel stability.  The full line up of Biobor® marine fuel additives are just the latest from this American manufacturer, also known for their innovative engineering and product design in the aviation, fuel and water treatment industries.  All Biobor® products are available through the Hammonds Fuel Additives international sales distributor network or for retail purchase at Academy Sports+Outdoors, West Marine, Bass Pro Shop, and other fine marine outlets across the country.  Dealer inquiries are welcome at (800) 582-4224.

ABOUT KEITH COMBS
Keith Combs had a monster year in 2011 which culminated in winning the Toyota Texas Bass Classic by tying his closest opponent and then winning the fish-off. Keith Combs Career earnings are $375,427. He is currently ranked 40th in the World according to BassFan Angler World Rankings.  Fans can interact with Combs on his Facebook page – http://www.facebook.com/KeithCombsFishing

ABOUT CLIFF CROCHET
“The Cajun Baby” Cliff Crochet of Pierre Part, LA is a fan favorite on the Bassmaster Elite Series.  Cliff Crochet’s career earnings are $157,935. He is currently ranked 114 in the World. Fans can interact with Crochet on his Facebook page www.facebook.com/CliffCrochet.

ABOUT BRADLEY ROY
At 19, Bradley Roy of Lancaster, KY was the youngest competitor ever on the Bassmaster Elite Series and was crowned the 2010 Rookie of the Year.  Bradley Roy’s career earnings $151,628, he is currently 130th in the World by BassFan.  Fans can interact with Roy on his Facebook page www.facebook.com/ProBradleyRoy.