Four of the most accomplished and popular pros find themselves just 30 miles from the Gulf of Mexico to begin the 2013 Bassmaster Elite Series Season. VanDam, Iaconelli, Scroggins and Swindle graciously share their insight about the Sabine River, saltwater catches and satellite radio favorites.

Q: Did you scout or pre-fish the Sabine River prior to arriving here this week?

KVD: No, not at all, in fact I haven’t even studied it on Google Earth.

Ike: I scouted, I was on the water, but I never made a cast. The biggest decision guys will have to make is whether to run far to escape the fishing pressure, or stay close to launch, deal with more fishing pressure, but have more time to fish.

Big Show: I rode around here one day for 6 hours in early December, just to learn how to run it, on my way home from Classic practice on Grand Lake.

GMan: My Humminbird says I rode 354 miles in 2 ½ days. I was just looking and learning how to navigate, but I only fished a few hours the whole time.

Q: What 2013 Bassmaster Elite Series tournament are you most looking forward to?

Ike: I’m honestly really looking forward to this one on The Sabine. I love going to places that we’ve never been before, that are supposed to be really tough.

Big Show: The next one after this at Lake Falcon. I caught a 5-bass limit that weighed 44 pounds 4 ounces there on the final day of the Elite in 2008, and finished 2nd in the tournament.

GMan: Believe it or not, this one right here. I’ve got a real good feeling about it. 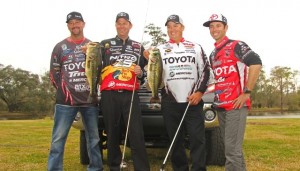 Q: What did you listen to most in your Tundra while driving to Orange, Texas?

Big Show: The Highway, Channel 59 on Sirius, I like that Ray Scott song “Those Jeans.”

Q: We’re only a few miles from the ocean here in Orange, Texas – what’s the coolest saltwater fish you’ve ever caught?

Big Show: A 10-foot long Spinner Shark that jumped out of the water several times near St. Augustine.

GMan: A sailfish on a spinning reel off the coast of Miami.