Beyond the Pond – Jennifer Lowen

“It is funny now, it wasn’t then,” chuckled Jennifer Lowen as she looked back on the day that her now husband, Bill Lowen popped the question. Mrs. Lowen recalled the Christmas Eve when the then aspiring angler handed her the velvet jewelry box she had dreamt about for years. It was a serious day for the Ohio girl and there wasn’t anything funny about it to her.

“Bill and my sister’s husband were friends; I met him when I was 16 and he was 7 ½-years older than me,” she explained. “I was just a teenager but I liked him; he told me he would never date me until I was 18, ‘cause my dad might kill him.” 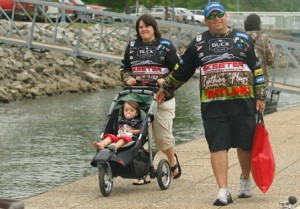 “I think he came to take me out the day I turned 18; he was my first serious boyfriend,” shared Mrs. Lowen recalling their first date, nearly a decade ago. Her story built up to “the day;” explaining they had been dating for about three years and the Yuletide Holiday was approaching. She remembered her excitement knowing there was a small box waiting for her under the tree, accompanied by another mid-size box.

Expectations soared as the young couple went to visit family and open Christmas gifts. She was sure her tiny, velvet box contained the ring that would symbolize their upcoming lives together. The moment arrived and she was given the container that held her future.

“I opened it and there it was… I couldn’t believe it,” said Mrs. Lowen describing how she was brought to tears.

No, not tears of joy – this is where her tale twists. It ‘twas the night before Christmas and her stocking was hung on the chimney with care as she hoped that her ring finger would soon not be bare. While visions of wedding plans danced in her head, she had not realized a practical joker was who she might wed.

Under estimating her beau’s sense of humor, Mrs. Lowen had not anticipated her suitor’s ability to infuse a comedic gesture and a little bit of fun into the serious moment.

As her eyes beamed down on the velvet box, she focused on the ring; no, it wasn’t a ring, it was a Ring … Pop. “I went outside and cried; I was so upset for getting my hopes up and it was only candy,” recalled Mrs. Lowen. 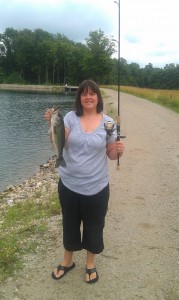 She was certain, that it was not quite the reaction Bill had hoped for but he surely thought she would find some fun in the other box. The other gift… the box that held a camo outfit fell flat as well and was not met with excitement either.

She matter-of-factly stated, “I told him I didn’t want a new camo suit and not to get me one.” While the humor wasn’t found in the moment, Mrs. Lowen laughs now saying, “I didn’t even get the joke; he had listened, it wasn’t a new camo suit… it was one he had taken from my closet.” Again with a chuckle she stated, “I was so upset I didn’t even recognize my own clothes.”

The Grinch didn’t really steal Mrs. Lowen’s Christmas that year and a Ring Pop wasn’t the only thing that her comical companion had up his sleeve. A “Wonderful Life” was about to play out when her “witty wooer” popped the question; for real. The original plan was to wait until later in the night, but after his fun flopped, he opted to nix that idea and get on with the real thing.

They woke the very next day, Christmas morning engaged.

Giggling at the memory, Mrs. Lowen shared they have been married now for seven years, five of which she has spent traveling the bass fishing circuit with her husband. “He was working as a flooring contractor; but he wanted to fish full-time and he was good at it,” she said.

“In the beginning when he wanted to go pro and give up his regular job, I was all for it and we decided we were going to give it three years to work and if it didn’t we would go back to where we were,” explained Mrs. Lowen. She did say her family had some reservations; but “got over it fast.”

She discussed their progress as her husband fished as an angler in the Bassmaster Elite Series circuit and she ran Team Lowen from behind the scenes, “I wouldn’t change a thing; I love traveling everywhere, doing new things and meeting new people.” Mrs. Lowen stated, “It would be too hard for him to go alone, I would never see him and I take care of lots of the business work, so it works out best.” 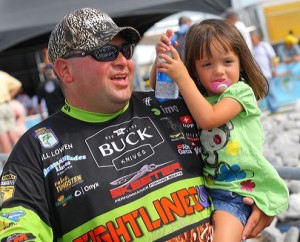 Almost three years ago they welcomed another member of the Lowen family into the team, when their daughter Nevaeh was born. Nevaeh adjusted quickly to the touring lifestyle, making her debut trip at only five months old. Team Lowen will get stronger soon as well, Mrs. Lowen announced that the trio will soon be making room for Nevaeh’s new little brother or sister to join them on the road.

Home school is on the horizon for the early years and beyond that it is undecided but the Lowen’s plan to keep the foursome together, as much as possible. “We will figure that out later,” she explained.

Aside from family and business, Mrs. Lowen is developing her creative interest in photography and is excited to expand her portfolio of portraits and wildlife through the trail stops. She also is looking forward to an exotic excursion to Africa and domestic treks through Montana and Yellowstone. 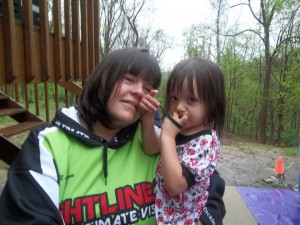 With those travel adventures yet to come, for now Mrs. Lowen foresees many ventures to local attractions and other touristy field trips on the tour. “I love seeing the different states and taking Nevaeh to different zoo’s at each tour stop,” she commented.

Thinking back on the years that she has been on the road, she remarked, “It can be an emotional rollercoaster but you take it day-by-day, talk to your friends; who become your road family, and keep a good sense of humor to have a lot of fun.” She did not, however, recommend Ring Pops as an engagement ring. “Bill has a big sense of humor, but I do I think that was the last practical joke that he played on me.”

Mrs. Lowen has not had a Ring Pop since. 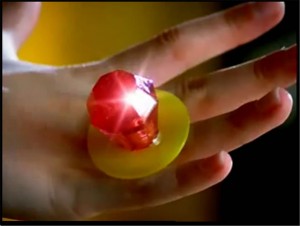 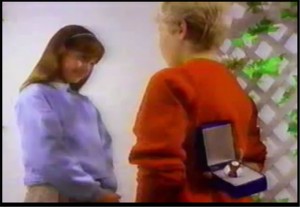