Beyond the Pond – Kerry Short

3/9/2011 – “A good friend is a connection to life-a tie to the past, a road to the future, the key to sanity in a totally insane world.” – Lois Wyse American author and columnist

Those who are old enough to recollect the 80’s, often have memories of that unsolved Rubik’s Cube in their dresser drawer, the not so faint aroma of Aqua Net hairspray on the girls that spread to the boys in the big hair metal bands. Pegged, stonewash jeans topped off with the outfit enhancing legwarmers, members only jackets with sleeves pushed past the elbows or the hand motions that went along with “phoning home” and “waxing on and waxing off.”

While the close of the 80’s brought the deserving end of many things that came to be in the decade, it also was a time that served as the beginning of others things and for Kevin and Kerry Short it was the beginning of a relationship, a friendship, a marriage that would stand the test of time. 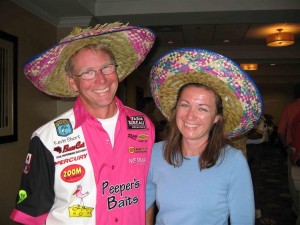 The Shorts met in the workplace in 1987 and nearly a quarter century later have cultivated a marriage to their best friend. The friendship in their relationship came through loud and clear as Kerry discussed the life together that brought them down the road to the place they are now … on tour with the Bassmaster Elite Series.

Following their wedding the couple led the typical, nine to five grind of a two-income household for more than a decade; however, in 2004 they added another business venture into their daily life when she whole-heartedly backed her husband’s desire to go pro in the bass fishing industry. Recalling she really had no doubts about the decision she remarked, “you have to have faith in what your heart is telling you to do.”

At that time the Shorts both lived a double life with their regular day jobs and on the tournament trail of what was then called the Top 150 prior to its evolution into the Bassmaster Elite Series. The excitement of Short’s rookie year was shrouded with the tragedy of the passing of their 19-year-old daughter Michelle in a car accident while they were away at a tour stop.

The event led to Kerry leaving her corporate career in the past and going forth on the journey as a travel companion and business manager for her husband as well as the development of an annual scholarship tournament in honor of their daughter. 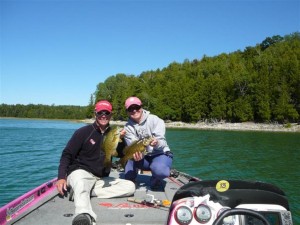 She continued to support her husband’s continued mix of his full-time profession with the Arkansas Farm Bureau and fishing the trail for three more years; but as time passed one had to prevail and fishing won out. Explaining it was the best decision for them she stated, “We talked about it in great length before we did it and if we couldn’t have made the numbers work financially, we wouldn’t have done it.”

Describing her daily routine being filled with running much of the business behind her husband’s career, in addition to their graphics company and their e-commerce site Peepers Baits, she expressed, “I paid my dues being an employee for more than twenty years and I don’t miss the stress.” She continued to say, “The main difference in my life now is that I am working for my family, rather than someone else and I love it.” 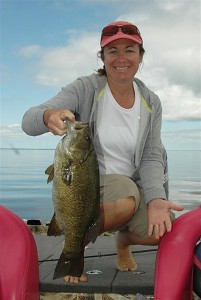 Aside from the money-making propositions, she devotes her time to giving back. In honor of their daughter, the Shorts have founded the Michelle Short Scholarship Benefit Tournament for the Michelle Short Scholarship Fund at the University of Central Arkansas. Kerry explained the tournament’s purpose, “our daughter, Michelle was a softball player at the University and the fund is set up to provide aide to one of the ball players at the school.”

Apart from raising funds for the scholarship, a goal of the tournament is to encourage youth in fishing; she stated, “We have a separate division for Adult/Youth teams; which grows in numbers every year, and aside from the fun of the fishing, all teams are encouraged to hunt for rubber ducks that have been released on the lake. All of the ducks are winners, but one of the ducks is a grand prize so everyone has a big time and all go home winners.”

In preparation for the season, she spends time gathering industry swag and goodies to provide “Thank You” bags for Marshals assigned to “Team K-Pink” as they are known because of Kevin’s pink color scheme. 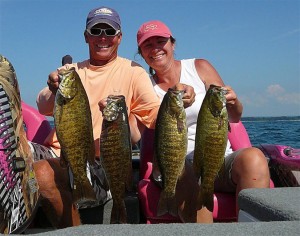 To show how grateful the Shorts are for the Marshals that pay $100 to “ride-along” with an Elite fisherman to keep all honest during a tournament and aren’t allowed to fish, she said, “Kevin and I take a few extra steps to make sure they know how much we appreciate their contribution to our sport by providing each of their Marshals a goodie bag,” she explained, “Gathering the goodies and making the bags has become one of my pet projects and we have great products this year; let’s just say if you’re a Marshal, you want to go for a ride in the pink BassCat.”

Being able to work for her family and spend time on projects close to her heart is a great benefit to her life on the road but she finds that the best part that being on tour has afforded her is the companionship it offers the couple. “We can stop and do fun things together, I cook and we eat together; we spend time together. If we weren’t on the road together he would have to travel by himself and I would be home alone; we would be without each other’s company.”

Recalling proudly the 2009 Elite Series stop in Fort Madison, Iowa, she remarked, “Kevin came from sixth place to first on the last day; surprising everyone, he sealed the deal that he belonged in the pro world of fishing,” 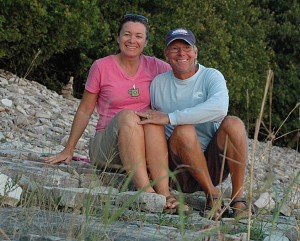 When days on the water aren’t always as good as that the day he won his first Elite Series title, she said there is nothing she can do but let him have his space. She commented, “no one is as hard on him as he is on himself; there is nothing I can do but let him work it out alone and he will.” She continued to say, “I see wives that ride their husbands but I know nothing I can say or do will change anything.” Remembering several tournaments in the first year that resulted in long, quiet drives home, she said, “We could go thousands of miles with nothing said, but in the end he would figure it out.”

As she described what she feels makes them successful, the strength of the friendship within their marriage was apparent. Reiterating that their situation thrives because of how well they get along and work together she urged the same for others, “to make this type of life work, you need a good relationship, a good foundation to build upon,” she noted. “We just get along so well, that we can make everything and anything work.”

It is clear that in the Shorts marriage as well as their life in the bass fishing industry they have found the secret to their success, their connection to life; a tie to the past and a road to the future, the key to sanity in a totally insane world; they have found each other.