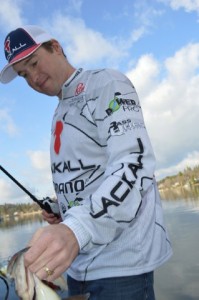 Any Doubts? Consider the fact that he used the techniques to consecutive top five finishes in his first and second trip to the Forrest Wood Cup, a top 10 in his third, and an 11th place finish last year.  All of them in the summer, and his offshore prowess figured into all of them.

In two of those events; those at Lake Lanier, he targeted largely suspended bass.  “I know that people say suspended fish can be some of the more difficult ones to catch,” said Meyer.  “But to me, it’s not that they’re so difficult to catch, it’s that they can be difficult to find.”

By chasing the spotted bass on the reservoirs near his Northern California home, Meyer has developed a system for finding and catching suspended bass that have helped him on tour.  A lot of his approach revolves around his aforementioned skills with a finesse rod, but that’s not all.

It starts with finding those fish as well.

With those conditions, the moment he backs his Ranger into the water, Meyer is on the search for clues as to where he is going to need to start searching for bass. “I start by trying to find what level the baitfish are at,” said the Auburn, Calif. pro.  “If I see a lot of baitfish on my Lowrance in 30

feet of water while I am idling out, chances are that is the depth the baitfish are holding in.”

He then begins to search for structure elements that are in that depth.  He said that he can sometimes locate bass relating directly to humps or points 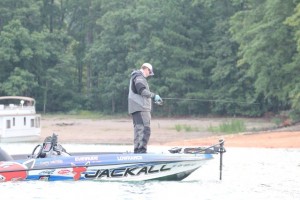 in that zone, but he often has to move off of those bottom features and locate bass in the general vicinity of those topographical features, but out over deeper water.  “They may be at 30 feet; the depth zone that the baitfish were in, but holding over 100 feet of open water,” he said.  “When I find those fish, they are usually a healthier fish, that’s actually feeding.  But, they are put off by fishing and boating pressure.”

He said early on, he started out by looking for suspended fish in more obvious places.  Bridge pilings, bluff walls and over prominent points provided the framework for becoming more comfortable with locating bass that so many anglers choose not to target.

His best friend was shade.  The edges and angles of bluff walls cast shadows as the sun shifted, and the cover that the shade from a bridge provided could also be effective.  “Shade can actually be viewed as its own type of cover,” he said.  “I’ve been fishing bridges in the afternoon and by following the shade line out, I’ve caught suspended fish in that shade line all the way out into open water.”

He said that he has caught suspended bass 50 feet deep, over 300 feet of water on several occasions at home, and 20 to 30 feet over 100 feet on tour, and suggested anglers stretch themselves a little more in their search.

Setups for Suspended Bass
Meyer has two main favorites for catching suspended bass in the summer; a topwater bait and a dropshot.  He said that suspended bass will often explode from 20 feet deep, crush prey at 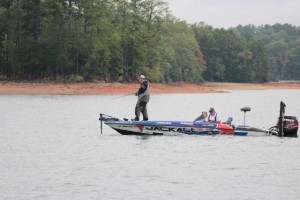 the surface then quickly return.  So, he likes to throw a Jackall Lures Bowstick 130 over the top of suspended fish.

He throws the cigar shaped walking bait on a 7’2″ medium-heavy Shimano Cumara rod matched with a 7.1 retrieve speed Shimano Chronarch E7 reel.  He fills his reel with 30-pound-test Power Pro Super Slick braided line in the aqua green color, then usesa permanent marker to black out four to five feet of the end to help camouflage it in the water.

His second setup is actually his primary rig, is a dropshot rig, which he fishes in two different ways.  He uses 7′ to 7’2″ medium action Shimano Cumara spining rods matched with a Shimano Sustain in the 2500 size.  He spools that with 10-pound-test Power Pro Super Slick and ties a six to eight-pound-test leader of Seaguar Tatsu fluorocarbon to it.  His choice of hooks is either a size2 Owner Mosquito hook for open water, nose hook applications, or a size1 Roboworm Rebarb hook for Texas Rigging in and around brushpiles.  He uses 1/16 to 1/4-ounce dropshot weights depending upon how he is presenting the lure.

His favorite lure for the setup is a Jackall Crosstail Shad.  “It is a great minnow imitating bait with awesome action,” he said.  “I almost always use a shad color when I’m fishing for suspended bass.”

Fishing the Rigs
The topwater bait is cast over the tops of where he has located the school, and worked quickly to try and call attention to the commotion on the surface.  He believes it also appeals to the needs of the bass at depths.  “Their air bladders are full, so they can’t really waste any time getting up or down,” he said.  “I walk the bait quickly and try to make them come up fast and crush it like they do a school of shad at the surface.”

He also said that the topwater bait has another benefit; it makes fish exposes themselves so that he knows where to target them with his dropshot rig.

For the dropshot rig, he uses the heavier sinkers; 3/16 to 1/4 ounce, when he is fishing vertically over the school.  He said that he drops the lure to the depth of the fish and slowly works 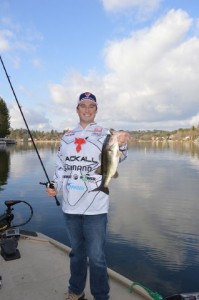 the lure through the school.  “You can see them on your graph.” he said.  “They will follow the bait up and down until it becomes like a fly buzzing around a dog; eventually they will snap at it.”

The other method is to use the lighter sinkers; 1/16 to 1/8-ounce to cast the lure over the top of the school and past it, then let it sink for a few feet on an open bail before clicking it over and letting the lure pendulum down through the fish.  He said this is an extremely effective method for catching bass that become spooky with the boat directly on top of them.

Tips for Getting Started
Meyer said it is best to start simple when beginning to look for and target suspended fish.  “I would start by looking around bridge pilings and bluff walls before going to points and open water,” he said.  “I’d throw a simple rig like a 4.8″ or 5.8″ Jackall Flickshake on a 1/16-ounce Jackall Weedless Wacky Head and get some confidence in making them bite.

“Then, I’d expand my search to more complex targets and the rigs I talked about before.  These are the best for producing the high quality bites I need in tournaments,” he said.  “It’s not that hard to catch them when they are suspended once you get comfortable with locating them.”