The 2012 Bassmaster Classic is complete, the final standings are in the record books and the champion; Chris Lane, is on his victory lap. The press releases have been drafted and broadcast, and the high level details have been retold, but we at Advanced Angler want a little more. 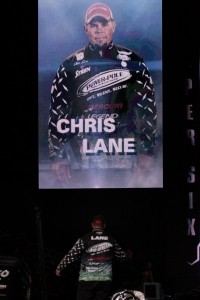 But, that’s only a look at the story. We look to go in depth with the top finishers; those who carved their day in the spotlight and challenged for the victory. While we will get the down and dirty details with many of the top finishers, there is no better place to start than with the champion himself.

Chris Lane is a 36-year-old Elite Series pro from Guntersville, Ala. He originally hails from Lakeland, Fla., and his home lake had always been considered the Kissimmee Chain near Kissimmee, Fla. It was his familiarity with Florida fishing that gave him a leg up in the first Southern Open of 2012 – which he won, and eventually the Bassmaster Classic on the Red River.

Practice
Lane revealed that he spent all of his first practice day and most of his second practice day on pool five, the pool which the anglers took off from Red River South Marina. “I knew that Skeet (Reese) had won in pool five and Ike (Mike Iaconelli) had finished second in pool four in the 2009 Classic,” said Lane. “So, I knew that the quality was there in both pools. I also knew that we were going to get hit with nasty storms during practice, so I stayed close early.” 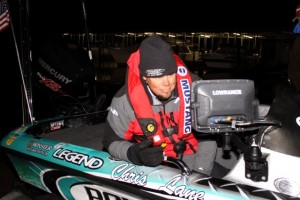 On the last day of practice, he ventured into the area known as Sullivan’s and the Jungles in search of quality fish he could rely on. What he found was that he was able to catch quality fish in both pools, and that he could win the tournament in both areas; he just had to decide which one to fish. He ended up not having to make a decision; he was able to navigate the locks and use both pool four and pool five in the event.

He established a program that found him fishing backwater ponds that had shallow flats with a steep drop that had at least seven feet of depth nearby. “In Florida during the spring, the buck bass (males) are the first to come into the shallows,” said Lane. “The females hold in deep water and move up when the weather warms. if the weather turns cold, they slip back into the deep water and wait it out. That was my pattern in the Southern Open at the Harris Chain, and the same principles seemed to apply at the Red River.”

He said that the weather and aquatic grasses played a part in both events. In Florida, having the bass held off by cool weather kept them on the outside grass edges, and it did the same in Shreveport / Bossier City – and it played right into his hands.

Day One
He was fortunate to get through the lock into pool four and be the first angler into the backwaters he was fishing. What he found was that the warm weather from the past three days had pushed the water temperature up into the low go’s, and with that warmer water, the bass moved into the shallows. 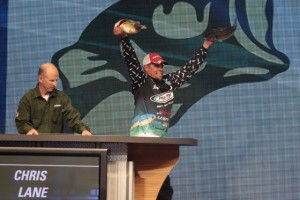 He responded by fan casting the Gambler Ugly Otter at 45-degree angles to the bank and working it back to the boat. He said he found his fish very shallow. “I caught them in a foot of water most of the day,” he said. “I was able to make casts and work the bait back to the boat; but, it would change.”

Day One Weight 16 pounds, 4 ounces -tied for sixth place with his brother Bobby.

Day Two
The second morning of the tournament posed the first real critical adjustment to the field. The overnight lows slipped into the low 30’s, and the afternoon highs never crested above the mid 60’s and the winds blew. Lane reported that the shallow bite he’d experienced the day before was different, and he knew almost immediately. “I had to move off of the deeper edges to get bites from bigger fish,” he said. “I moved off the edges and was able to pick up some bites.”

He targeted the milfoil on the outside edges with the Gambler Ugly Otter and the prototype of a new Luck E Strike Chris’ Fast Lane Tube. He would cast the Ugly Otter and Flip the Fast Lane tube to the grass edges on the break off into deep water. He would improve his position by jumping into the lead. 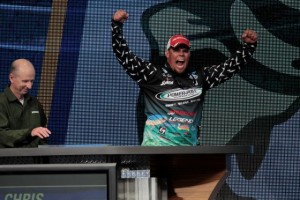 Day Three
Things turned worse for Lane on day three. He went to his primary water and only had one small fish in his boat at 11:00AM. The overnight lows dipped even lower, and Lane said the fish got even more finicky. “I was starting to struggle with decisions in my mind,” he said. “I was fighting with myself as to whether I should stay in my area in pool four, or leave. But, I stuck to my guns and decided to stay.”

It was at that point that he caught what he believes is the pivotal fish of the tournament. “I made a cast and got a bite that I missed,” he said. “But on my next cast, I got bit and the line started swimming to deep water. I set the hook and fought the fish to the boat; it turned out to be the 6-pound, 10-ounce fish I weighed in as my big fish.”

He would go on to boat three more keepers in the next 30 minutes and fill out his limit. he called the period the “most intense half an hour of my career. I figured I had around 12 to 13 pounds in the boat,” he said. “I had two small keepers that I wanted to cull out, and I decided then that it was time to make a move.” 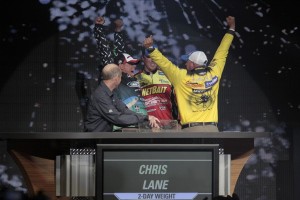 He left at noon and ran to the lock, getting through without an issue; other than losing an hour of fishing time. “I had a feeling that I had fallen behind while I was locking,” he said. “I felt like I had some ground to make up.” He entered his secondary area, a pond in pool five and almost immediately culled the two fish out; adding more than two pounds to his weight. He wouldn’t catch any more keepers throughout the day. As he was running out of time, he fished calmly and clean, but ended the day without any more bites. Giving himself plenty of time to return to the takeout, he allowed B.A.S.S. reporter Robbie Floyd to climb into his boat for the ride back.

“Robbie asked me how I felt,” said Lane. “I told him I felt good and that I felt like I had done everything I could. I was ready to weigh-in; I had no regrets and felt like I could do nothing else. So, with five minutes left, I put my rods down and said I was done.”

History would show that he would go on to weigh 15 pounds, 14 ounces and go on to beat Vinson by 3 pounds, 7 ounces with a three day total of 21 pounds, 6 ounces.

When Did He Know?
Lane said he knew that he had won when he heard Vinson’s weight. “I was signing an autograph for a kid in the stands,” he said. “When they called Greg’s (Vinson’s) weight, I fell into my chair knowing I had enough to win.” he returned the hat and rode through the rest of the drive to the stage. 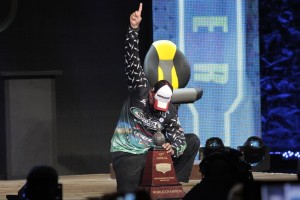 His first move was to leave the boat and walk to Vinson, shake his hand and give him a hug. “I wanted to tell him congratulations on a great tournament,” he said. “I knew that whatever happened, I wouldn’t be able to say anything to him after we weighed my fish, so I didn’t want that moment to slip by. Greg’s a great guy, and he fished a great tournament, and I wanted him to know that.”

He returned to his boat, weighed his fish and all bedlam ensued; his brother Bobby would rush from backstage and embrace him, and the celebration began. “I’ve seen some of the pictures afterwards, and I if I didn’t know, I wouldn’t have been able to tell which one of us won the Classic,” he said. “It was a great moment to share with my brother.”

The confetti went off, and his wife and four children came on stage; most of them in tears. “My wife (Holly) yelled out ‘I can’t believe this!’ and my daughter was crying,” he said. “I hugged them all and took them for the victory lap I’ve been dreaming of for so long.”

What Now?
Lane said he feels a sense of responsibility to leave his reign as Classic Champion with being a part of helping the sport. “I’ve watched what guys like Alton (Jones), Kevin (VanDam) and Skeet (Reese) have done in their reigns, and they improved things,” he said. “They handled things right and the sport was better for it – I want to do the same.”

Other than that, he said he wants to go into the Elite Series intent on trying to win an Angler of the Year title. “I’m not going to change much just because I am already double qualified for the Classic,” he said. “I still want to have my best year as an Elite Series pro and try for AOY. Knowing I’m already in for 2013 will give me a little chance to take some gambles I may not otherwise take; but, I’m still going to be the same guy.”

So, he begins his year-long victory lap which started with courage and decision making on the water, began in earnest with exuberance and passion with his family at his side and ends in the fall with the final event of the 2012 Elite Series season; it should be a great ride.

Gear
Lane used two setups throughout the event, and he had them setup like this. He threw both lures on a 7’4″ medium-heavy All Star AS Micro rod. For the Bowen’s Silver Ugly Otter with an Abu Garcia Revo MGX in a 7.9:1 ratio filled with, 15-pound Stren Brute Strength monofilament or 50-pound Stren Sonic Braid When he Flipped the Luck “E” Strike G4 Tube (now known as Chris’ Fast Lane Tube) in Black Neon with chartreuse internal color he used a Revo SX reel in 7.1:1 retrieve speed. He used 1/8- or 3/16-ounce Gambler tungsten weights; depending on the depth, and threw them on a 4/0 Wide Gap hook (brand not mentioned).