The 2012 Bassmaster Classic is complete, the final standings are in the record books and the champion; Chris Lane, is on his victory lap. The press releases have been drafted and broadcast, and the high level details have been retold, but we at Advanced Angler want a little more.
The top 10 shaped up like this:

But, that’s only a look at the story. We look to go in depth with the top finishers; those who carved their day in the spotlight and challenged for the victory. While we will get the down and dirty details with many of the top finishers. 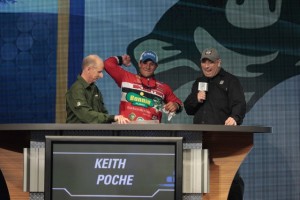 Keith Poche is officially listed as living in Pike Road, Ala., but he is originally from Natchitoches, La., approximately 75 miles away from Shreveport / Bossier City, La. Poche was competing in his first Bassmaster Classic, although 2012 will be his third season on the Bassmaster Elite Series. In two previous seasons, Poche had cashed checks in 10 of his 16 Elite Series events, and had finished the 2010 season in 10th place in the Toyota Tundra Bassmaster Angler of the Year points standings.

Building on that momentum, entering his first Bassmaster Classic near his childhood home; Poche set out to find a program that would give him a chance to win the event and make his place in bass fishing history.

Practice
Poche spent five days pre-practicing the tournament waters on the Red River prior to them going off limits in December. “I mainly just rode around and looked for areas that I thought would provide good spawning areas for bass in February,” he said. “The first place I stopped was a little backwater in Sullivan’s that I couldn’t even get into, and that’s where I ended up fishing in the tournament.”

The backwater area featured a good migration route, and it seemed to have the right bottom composition for Poche to consider one of his areas to consider for the event. “The two factors I considered for the event were water clarity and bottom composition,” he said. “Knowing that we would be in a late pre-spawn to spawn timeframe, I needed hard bottom areas with clear water.”
When he returned for the official practice period, he returned to the area and found the components he wanted. He also found the kind of quality fish he wanted; although they were not easy to catch. “I found one other area that I could get five quick keeper bites,” he said. “But, I decided that quality was more important, so I chose that little backwater as my starting area.”

Day One
Despite being boat number 35 out the first morning, Poche relied on two things to help him get into the water he wanted to fish before anyone else. He said that he had one of the fastest boats on tour, but also that everyone gets into and out of the locks at the same time, so he could pass people and get there ahead of other anglers. 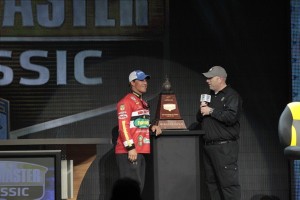 “I was the first one to get into that backwater,” he said. “Dean Rojas and T.O. (Takahiro Omori) wee in the same area, but Rojas went another direction, and T.O. followed me into the canal, but turned around, so I had it to myself.”
When he arrived, he found that the bigger females had moved in with the warming weather. He continued with his game plan to throw a modified soft plastic stickbait to try and draw a reaction strike while he looked for bedding fish. “I caught something like 30 fish the first day, and lost another 10 to 15,” he said. “But, I caught quality too, and that helped me take the lead after day one.

“It felt really good to lead the first day of the Bassmaster Classic in my home state,” he said. “I was really excited to have that opportunity; it was a really special moment for me.”

Day Two
The colder temperatures that came into the area overnight caused the water temperatures to drop as well. He was surprised to see that the fish that had begun pulling up the previous day had continued, but they had gotten a little more difficult to catch. “I still got plenty of bites, but they weren’t taking the bait as well,” he said. “I ended up losing them quite a bit more on day two; especially early in the day, but as the day went on, they started getting on beds again.” 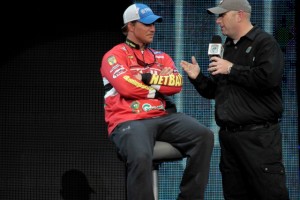 Day Three
He went back in to his little area in Sullivan’s on the third day and managed to put a few in the boat. He found the four and a half pounder from the day before on her bed again, but lost her again when she bit his lure. He said that he decided to open up his area a little more that afternoon when sun warmed his backwater, so he roamed around a little bit more in his area.

He revealed that he felt like he needed to expand his area to keep from pressuring the same few fish he had been for two days. “The sun came up really bright, and the water warmed up,” he said. “When it did, bass started moving up, so I kept moving through the area, although I stayed committed to that backwater I was in.”

He was able to pull together a solid limit that pushed him back up the leaderboard. In fact, he sat atop the leader’s hot seat until Vinson weighed-in second to last.

The Aftermath
In retrospect, Poche looks back at his first Bassmaster Classic experience with mixed emotions. While he was happy to be in the field, he knows that he put himself in the right positions and was unable to convert. “If I don’t lose those fish, I’m pretty sure I would have had had enough weight to win; but, I didn’t get them in the boat,” he said. “On the other hand, I proved to myself that I can win this tournament. I’m good enough to put it together and make the adjustments I need to compete.

“It gives me a ton of confidence going into the 2012 season, and I’m looking forward to getting started.” 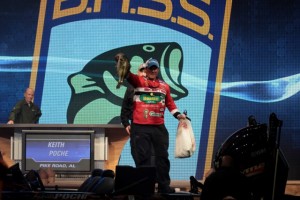 Poche also weighed in the biggest bass of the event; a 6-pound, 13-ounce largemouth that claimed the $2500 Carhartt Big Bass of the tournament.