Story and Photos by Dan O’Sullivan
The 2012 Bassmaster Classic is complete, the final standings are in the record books and the champion; Chris Lane, is on his victory lap. The press releases have been drafted and broadcast, and the high level details have been retold, but we at Advanced Angler want a little more. 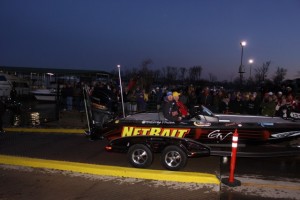 But, that’s only a look at the story. We look to go in depth with the top finishers; those who carved their day in the spotlight and challenged for the victory. While we will get the down and dirty details with many of the top finishers, there is no better place to start than with the champion himself.

Greg Vinson of Wetumpka, Ala. was fishing his second Bassmaster Classic in 2012. Since joining the Elite Series in 2010 after several years in FLW Outdoors competition, Vinson made his presence known by cashing six of eight checks in his rookie year, and seven of eight checks in his second season. His first attempt at the Bassmaster Classic on the Louisiana Delta saw him finish in 24th place; but he would challenge for a victory in 2012, eventually finishing second. Here is how he did it.

Practice
Vinson didn’t plan on spending as much time pre-practicing on the Red River, but he visited the waterway three times before the Red River went off limits. “I planned on visiting it once in October, but I ended up going three times,” said Vinson. “I had to go to Skeeter to pick up my boat in November and went for a couple days after. Then, when I had to go to Skeeter again for a conference in December, and I went again.”

His scouting of the river helped him locate three distinct backwater areas that he would focus on in the official practice period for the Classic. He assumed that the Red River would be in prespawn mode, so he scouted backwaters that had ample spawning areas, but deeper water nearby. “I got several bites in Sullivan’s and that helped me focus on that general area,” he said. “I wanted to have at least five foot of depth to make sure cold weather didn’t completely ruin my areas.” 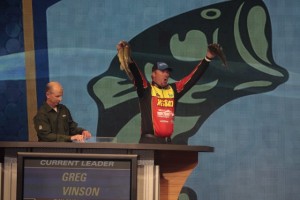 When the official practice started, he returned to the Little Jungle and found a grass mat that he got five bites in, even in the cold weather conditions of practice. “With the fish being in there during cold weather, I figured they would be there as it warmed,” he said. “I was able to get random bites elsewhere, but not groupings of fish, so, I basically committed to the Little Jungle.”

A trip through the Little Jungle on the official practice day convinced him that the fish were still there, so he decided that was his main area.

Day One
He made the run to the Little Jungle on the first morning of the tournament, and was fortunate to be the first competitor in the area. He said he went right to the grass mat, and found that things had changed. “I caught one little keeper in front of the mat, but nothing else,” he said. “I went to the back of the backwater, and didn’t get any bites there either.”

He stopped at the mat again, and caught two more small keepers on the edge. “I knew things were changing, so I picked up a 5/16-ounce War Eagle Mike McClelland Finesse spinnerbait and went to the ditch,” he said. When I caught one over three pounds on the ditch edge, I knew that the fish had moved onto the flats and scattered into the pad stems and wood.”

He would wind up catching 15 to 20 fish on day one; mainly on the spinnerbait in less than 2 feet of water. He reported leaving the fish in his area still biting. 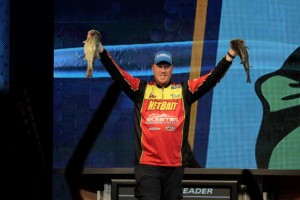 Day Two
Weather forecasts called for day two to be the coldest of the three competition days, and Vinson felt that the cold weather would cause his fish to move into the deeper areas of the Little Jungle. “I thought the overnight lows would cause the temperature to drop,” he said. “But it didn’t have the effect I thought it would. I went through my series of progressions, and I found that the fish had not moved like I thought they would have.”

After only catching one small keeper, he went to where he had seen a four pounder spawning the previous afternoon, and he caught it. But, after he caught that fish, the weather conditions slicked off. So, he turned to a more subtle presentation and picked up a NetBait Salt Lick soft plastic stickbait. he caught a few fish on the Salt Lick, but as the afternoon progressed, he was able to catch them on the spinnerbait again.

“The water temperature increased again to 59.5-degrees, and the fish got active again,” he said. “I had a nice flurry from 12:00 to 1:30, but had to leave to make sure I got back.” He made it to the takeoff with 45 minutes to spare and started tossing a Bandit 100 Squarebill, and he caught his biggest fish of the day in the bay near the launch ramp.

Day Three
Despite projections to the contrary, the third morning of the tournament proved to be the coldest of the event, and Vinson reported that the water temperature dropped even further overnight. “I had to turn to the Salt Lick again to catch a couple small keepers,” he said. “But I found a couple of bigger fish that were bedding, and I decided to go after them.”

One of the fish disappeared, and the other was spooky, but he eventually caught the spooky one on a Texas Rigged NetBait Paca Craw; the bass proved to be over four pounds, and was his biggest fish of the day. He kept fishing, and had a 45 minute flurry again in the Little Jungle, but reported not being able to catch any other big fish. he made the return trip to the weigh-in knowing that he probably didn’t do enough to win; despite catching another fish out of the area near the launch ramp on the Bandit 100 crankbait; which allowed him to cull. 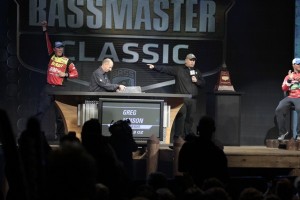 The Aftermath
Lane walked on stage prior to bringing his fish to the scales and shook Vinson’s hand and congratulated him for a great tournament. To Vinson, the gesture was no surprise. “Chris (Lane) is a great guy and to see him make sure he congratulated me doesn’t surprise me,” said Vinson. “While I’m disappointed I didn’t win; I have no problem being beaten by him. He’s a good champion, and if it wasn’t me, I’m glad it was a guy like him.”

He also said that his position gives him confidence heading into the season. “This is a big boost for my confidence,” he said. I was in contention to win the biggest tournament of the year, and that makes me feel stronger about me on this tour. It also has already proven to be a big boost professionally, the casual fan will now know who I am, and that can be a good thing going forward.” 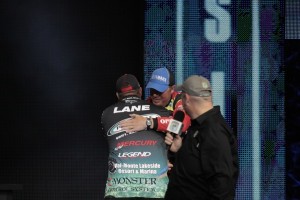