Thatâ€™s a strange headline to the casual observer of what appeared to be another easy Tommy Biffle run-away victory driven by his local knowledge of eastern Oklahoma waters. A raised eyebrow is understandable considering Biffle won the most recent Bassmaster Central Open by a dominating 8-pound margin.

But thereâ€™s more to the story. Getting to his winning water in a jet-powered 18-foot aluminum boat that only reached top end speeds of 33 miles per hour and looked better suited for crappie fishing was only half of Biffleâ€™s battle.

For starters, getting out of bed is a chore for Biffle. Not because the grizzled veteran is lazy, but because 30 years of spine beating boat rides propelled by his whatever it takes to win mentality have left his back, shoulders, neck and feet in a physical state comparable to most retired NFL centers.

His steps are short and choppy on feet tormented with plantar fasciitis. His neck moves not on a swivel, but instead as though stuck in a vice. And heâ€™s about as flexible as the river boulders he ran through on the Grand River arm of the Arkansas to win. Physically, the 53-year-old Biffle hurts. 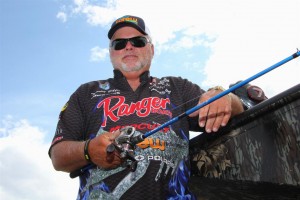 Mentally, soulfully, youâ€™re only poking a grizzly in the ribs if you question his ability to still catch them. For starters, in very recent years, Tommy has taken home tough-to-get 1st place trophies from B.A.S.S. Elite tournaments from New York to Alabama, and last year on his home waters of Fort Gibson, Oklahoma.

Last week, once out of bed, getting his boat off the trailer to practice proved impossible. Biffle knew he wanted to fish in the rocky shallows below the Grand River Dam, but when he attempted to launch his Ranger there in practice, the water was too shallow to float 1,900 pounds of fiberglass off the trailer.

Itâ€™s tough to win a tournament when you canâ€™t get your boat off the trailer. So Biffle called on an old friend, who days earlier in casual conversation had told Tommy he had acquired a jet boat. The friend was accomplished tournament angler Jimmy Carnell. Without hesitation, Carnell told Tommy to come get it.

Carnell said he had one to loan. He never said it was in great running order. â€œWhen I touched the navigation light switch, the motor trimmed up and down,â€ grinned Biffle. â€œAnd the best part was that under the passengerâ€™s console was a giant ratsâ€™ nest.â€

Biffle recruited respected boat mechanic Andy Stallings to help him work out all the bugs — and rats. The two thought they had everything in working order. Biffle blasted off on Day 1 of the tournament with confidence, but still had a puckering 33 miles per hour journey between boat smashing boulders in as little as 8-inches of water to get to his fishing hole. â€œI thought Andy and I got everything fixed-up, but when I finally got there, the front depth-finder wouldnâ€™t work. I fished the entire first day with no sonar,â€ lamented Biffle.

Self-reliance is a common trait among legendary bass anglers like Biffle, so with no sonar, he leaned on a lure he helped design called the Biffle Bug, and a signature series 6â€™ 10â€ Tour Biffle rod he designed for Quantum to dredge up the tournamentâ€™s biggest stringer. The limit weighed more than 18-pounds, and put Biffle on a pace to put most of the field a lap down before the race was half over.

Ironically, paired with a variety of Quantum reels including the Tour Edition PT and Smoke series SL100HPT, Biffle was using the same exact rod and lure he used to win the B.A.S.S. Elite event 15-months earlier on his home waters at Fort Gibson. 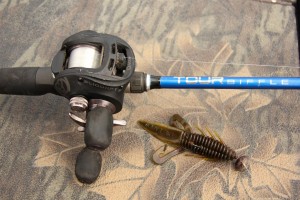 Tommy explained his affinity to his signature series blue stick. â€œI love that 6â€™ 10â€ rod of mine because itâ€™s perfectly balanced, meaning itâ€™s not tip heavy, so it feels like youâ€™re holding next to nothing and that makes it more sensitive. Plus, itâ€™s a heavy action rod blank, so you get great hook sets with it. I use it with my Biffle Bug, but also for deep worm fishing, big spinnerbaits, and pitching lighter jigs down a rocky bank.â€

Predictably, Biffleâ€™s win last June on Gibson left a taste comparable to pork frog juice in the mouths of most Elite Series anglers who doubted the home-field fairness of his win. Their verbal jabs and informal protest have poked at the bearâ€™s ribs ever since.

Biffle never forgot their expressed doubts about the goodness of his win on Gibson. â€œThey said B.A.S.S. moved it to my home lake and thatâ€™s the only reason I won. I told â€˜em I would have beat â€˜em on the river too had it not flooded and forced B.A.S.S to move the event to Gibson,â€ said Tommy. â€œSo by winning here this week on the river, thereâ€™s satisfaction in proving what Iâ€™ve been telling them.â€

Biffleâ€™s win this week didnâ€™t come easy. Instead it came through a borrowed boat with a ratsâ€™ nest under the console, electronics that went haywire and the risk of boat smashing boulders. Mostly, it came through the determination of a stiffened-up grizzled veteran to win whether away in Alabama, New York or right here at home.