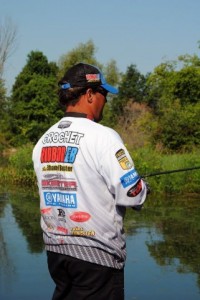 Being from the home of Swamp Wars, this Creole is as comfortable in dark, dirty, knee deep water as he would be elbow deep in a vat of Jambalaya or a pile of boiled crayfish.  In other words, Crochet loves to fish in shallow water.

His penchant for Flippin’ and Pitchin’ also led him to another love.  One that would start when he was a youngster for fun fishing, and then pick up as a major part of his tournament arsenal as his career would progress.

This Cajun loves him some hollow bodied frogs, Creole style.

“I threw some of the original Snag Proof and Scum Frogs with my daddy and my brother when we were kids out fishing at home,” said Crochet.  “But when I was watching the 2004 Bassmaster Classic, I saw Dean Rojas doing his thing with frogs, and it blew my mind.  I didn’t think it could be done that way.”

A whole new addiction was formed. 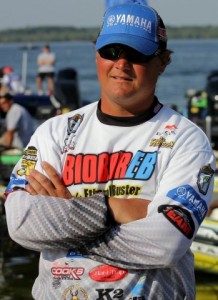 Break Out da Frogs
After watching Rojas employ his frog tactics at Lake Wylie, Crochet began playing with some of the hollow bodied croakers around the bayous at home.  His love for the bait really took hold while he was practicing for an FLW Walmart BFL event in 2006.

“I started practicing a little later than I wanted to on a Wednesday, so I went straight to some water that I thought should have some fish in it,” he said.  “When I got there, the water seemed too shallow for Flippin’ and definitely too shallow for Spinnerbaits, so I broke out the frog.”

He said he started throwing the floating bait around some cypress knees in water less than two feet deep.  When a three pounder crushed it, he knew he was on to something.  He proceeded to fish as many cypress trees as he could, catching everything that bit that day.  He would take the frog with him into the tournament and finish third.

“That was a fun day, and a fun tournament,” he said.  “I’ve been burned up with fishing a frog ever since.”

Creole Frog Gear
He prefers to throw his frogs on a 7’3″ heavy action Falcon Cara Split Grip Amistad rod paired with a high speed 7.1:1 retrieve reel.  He also feels more comfortable with heavier line than most people use for their frogs.  He said his choice for line is 80-pound-test Suffix 832 Braid.

“I think that it’s better to have more than enough power to pull fish out of heavy cover any time you need it,” he said.  “Some people use 50 or 65-pound-test braid, but even when the water’s open, there’s usually some kind of cover around, so I don’t want to take any chances with it.” 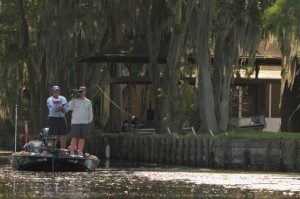 Perfect Frog Water
Crochet said that his perfect frog water is what he would call, opposite to what most people would call perfect frog water.  “So many people look for matted grass and that kind of cover to throw frogs on,” he said.  “That’s the kind of water where a frog is the ONLY bait you can throw on it; I look for areas where other people won’t typically throw a frog.”

He said that his prime frog spots are usually extremely shallow, but are bordering some sort of deeper water.  He said he likes to find steeper banks with some sort of cover on it in the shallowest part of the area.  “If I found a steep walled bank with an area that had about two feet of water with a laydown tree, that’s where I’d throw a frog,” he said.  “I’d start where that tree is in about eight inches of water and fish it out to the branches in two feet of water – that’s my perfect frog water.”

Key to Frog Fishing
Crochet said that what he has found in his brief tenure as a frog enthusiast is that an angler who can put the lure into places other anglers cannot is the one who is usually the most successful at it.  “I had to work on my casting with both hands in order to get better at frog fishing,” said Crochet.  “I had to learn how to throw with my left hand because frog fishing is all about being able to put the lure into cover at a variety of angles.”

He said he spent significant amounts of time in the middle of the lake teaching himself the casting motion.  After getting comfortable left-handed, he went to larger, open water targets like bridge pilings, then docks and larger trees before going into heavy cover with the bait.

“You have to be able to control the cast so that it goes low, over the water and under cover,” he said.  “Once you start getting it down, you’ll be able to get strikes that others won’t”

He also said that the frog is more effective at times anglers would not think to throw it.  “I start fishing the frog when the water temperature hits 58-degrees,” he said.  “From then, all the way into the fall is my favorite time to fish frogs.” 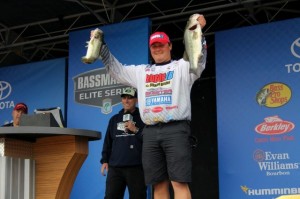 Crochet does not have a frog sponsor, so he picks the frogs that he likes the best and purchases them off the shelf.  He said the best thing for an angler to do is to experiment, and find the frog that makes him feel the most confident and fish what gives him the most confidence.”

A Caution About Frogs
He said that anglers need to be prepared when entering the frog arena.  “I have to warn everyone, this kind of fishing is addictive,” he said.  “I’m still learning about the frog, and I’ll admit that I have had so much fun fishing them that I often ride them into a big crash and burn in tournaments.

“Learn to use them, learn to love them, but work to find the limits for them on your lake, and it can be a great addition to any tournament arsenal,” he said.  “I love ’em, and I bet you will too.”

Find all of the most popular frogs on the market here at Monster Fishing Tackle.com