Daring to Dream – After the U.S. Open 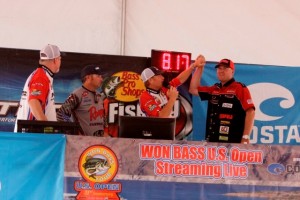 The 31st Anniversary WON Bass U.S. Open was contested last week on Lake Mead.  What has the reputation for being the toughest bass fishing tournament in the world once again lived up to its reputation.  Lake Mead has often been a stingy host, and when factoring that the average daily weight for the event hovered around six pounds; Mead may have been at her cruelest.

Each year, the U.S. Open draws some of the biggest National pros to the desert, and the best anglers from the West certainly come out in full force for their showcase event.  2013 was no different as the usual National suspects entered and few who are new to the National scene.  Pros like Rick Clunn, John Murray, Aaron Martens, Clifford Pirch, Brett Hite, Byron Velvick, Morizo Shimizu, Randy Blauket and Kevin Stewart all entered.

The West’s top anglers entered as well.  Mike Folkestad, Gary Dobyns, Justin Kerr, Roy Hawk, Derek Yamamoto, Joe Uribe Jr., Ricky Shabazz, Shaun Bailey, Johnny Johnson.  Some of these anglers have achieved a level of success in their chosen areas.  Some are National pros who have won events and titles, others have built businesses, and some are known for their television presence.

The U.S. Open has long been known as a career starter.  To some anglers, like former Champion Rich Tauber, it is his career benchmark that got him set to go out and try his hand Nationally.  For others like Folkestad, Martens, Pirch, Velvick and Murray, it a piece of a puzzle that helps define a career, and for 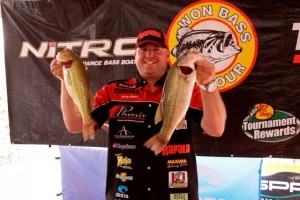 someone like Dobyns, it may very well be the stamp to a competitive career.

Everyone who fished it this year had hopes of becoming the 2013 U.S. Open Champion.

For one angler, Rusty Brown – known only locally in his Southern California community – it became the reward of a career of trying.  His victory also serves as an example that anyone willing to put in the time can build themselves a career in the sport of fishing.

To keep things short, Brown built a plan revolving around consistency to his win.  After several years of trying to raise the U.S. Open trophy, this year was the one.  His steady 10-pound performances over three days helped him be the last one standing at the end.

He was in ninth place after day one, second after day two, and when Hite slipped only slightly on day three, Brown’s consistency helped him withstand the hard charge of Pirch; who posted a 15.87-pound limit (the largest single day weight in the U.S. Open that anyone I know has ever heard of) to win. 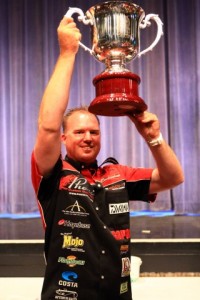 In an event that typically requires a little over 11 pounds a day to win, Brown capitalized on an more difficult than usual bite to win with just under ten and a half pounds a day.  In most years, his winning weight would have netted him a high finish, but in eight of the last 13 U.S. Opens, it may have been good enough for a top 10 finish at best.  However, when strategy is discussed for this year’s U.S. Open, the Tustin, Calif. angler certainly put together one that earned him a victory.

Strategy is one of those types of things that gets discussed after an event has concluded.  Pundits can discuss their favorites to win an event, they can discuss the types of weights that they believe will earn the trophy, but; in bass fishing, strategy only comes to the forefront after the chess match is over and the victor is named.

In 2009, Skeet Reese won the Bassmaster Classic on the Red River by building a strategy that would allow him to maximize his fishing time by staying local.  But, he also built a plan that would capitalize on the fish vacating backwaters with high fishing pressure and moving towards him.  The plan worked.

At this year’s U.S. Open, Brown built a strategy that let the U.S. Open come to him. He panned on consistency, and when others’ weights began to bounce up and down; he was the last man standing holding the trophy, the keys to the new Nitro Z8 / Mercury prize boat and a wad of cash.

The Effects
Bass fishing hardcores will certainly be able to dissect the strategy, discuss the outcomes and remember the moves that made a difference during this event.  However, my hope is that it will show other anglers out there that there is a career out there for those who want it. 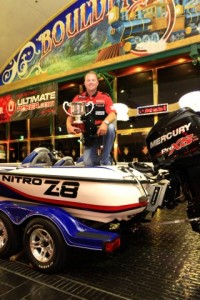 There have been people who have built careers off of a solitary win.  Tauber built his on his U.S. Open championship, others have built them off of Bassmaster Classic wins or even tour level wins in general.  What Brown now does; whether he knows it or not, is show anglers of the world is that hard work can pay off, and sometimes an unknown source can provide inspiration to many.

Without stories like his, there would be no Bryan Kerchal, no Brandon Palaniuk, no Mike Iaconelli, no Jacob Wheeler, or any of the relative nobodies who have become fan favorites in the sport today.

There are thoughts out there to try and limit fields to only those with credential.  However, when the sport has stories like Brown’s to look at, listen to or read; it gives those out there hope that they can make something of themselves too.

The likelihood of Brown turning this U.S. Open victory into a National career that sees him become the next Kevin VanDam, David Dudley, Bryan Thrift, Brent Ehrler, Ish Monroe or Jason Christie is slim.  However, to some fishing fan; especially those in the Western United States, he may have just lit a fire that will someday introduce us to the angler who will surpass the records being set by the best the sport has seen.

I certainly hope so, and I hope that angler has the opportunities that allow them to build that career.