Shallow water angling can be an incredibly vivid experience. Not only does an angler feel the strike, but many times, the angler also sees the strike. The combination of visual and physical connection to the strike can make for a lot of enjoyment on the water. 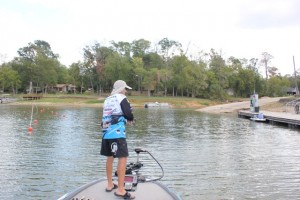 Anglers often think of topwater baits, spinnerbaits, squarebill crankbaits or Flippin’ when they encounter shallow water. Each one of those lures can produce tremendous results throughout the year, but they all have their seasons that another presentation is better.

When bass are on a Flippin’ bite, that is what they will eat the most. However, when the conditions changes and they get more aggressive, moving baits become the trick. Crankbaits are excellent in shallow water when there is a little bit of chop on the water. Spinnerbaits can be excellent in skinny water whether it is windy, or the water is heavily stained.

But, what happens when bass had been chasing reaction baits, but they haven’t quite gone negative? Or, what happens if the fish are really aggressive, but the she shoreline cover is too thick to throw a crankbait or spinnerbait? You might toss a soft jerkbait, or perhaps a buzzing frog, but there is another option.

This is where Springville, Ala. pro Randy Howell loves a swim jig.

Swim Jig Reasons
Howell said that a swim jig is all about making the right presentation, and keeping the lure effective in the strike zone. “Swim jigs are great because they present a big profile to big bass,” he said. “But, they are also really good around shallow cover. Because of these two things, they are one of my favorite techniques when the bass are shallow.”

He suggested that anglers look at them in the springtime when rains and runoff swell the water level, flooding the shoreline grasses that were out of the water yesterday. He also suggests them as good options when there is an abundance of hard cover such as laydown wood and docks in the water. 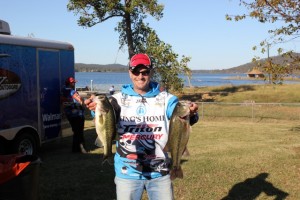 He also said that they are a great alternative for when fishing pressure causes shallow water bass to slow down. When fish start short striking a spinnerbait or a crankbait, it’s time for a swim jig.

Swim Gear
Howell loves the swim jig so much that he has been working with his sponsor Lunker Lure on a new jig called the EZ Skip and Swim. The lure features a triangular shaped head with most of the body weight hidden behind the skirt. But, the weight is not merely a chunk of weight on the hook, it is formed into a flat, sled-like shape that helps the lure easily skip underneath docks and overhanging obstructions.

He chooses a 7’2″ medium-heavy Daiwa Steez FleXlite rod matched with a Daiwa Zillion Type R reel with 7.3:1 retrieve speed. He spools that with 15-to 20-pound-test Molix Fluorocarbon line depending on the water clarity.

He pairs his jig with a 5-inch Yamamoto twin tailed grub as a trailer, which he matches to the skirt color on his jig. “I use shad colors a lot when bass start chasing shad,” he said. “But from the spring until summertime, I tend to use a lot of bluegill colors, unless the water is really dirty, then I turn to black and blue.”

He said that he prefers to use the 3/8-ounce version of the Skip n Swim because he has the best of both worlds; casting and lure control. “The 3/8-ounce size still has great castability, and it doesn’t lift too quickly on a retrieve,’ he said. “If I need to speed it up, it will stay at the depth I want it to. The 1/4-ounce size is great for extra shallow water, or if I need to slow roll a jig, and the 1/2-ounce size is great for a little deeper water, or heavier current.”

Cast and Retrieve
Howell believes in putting the lure into areas that bass seldom see another lure. In fact, he believes so strongly in the thought, that he not only perfected the skipping presentation with his natural right handed casting, but he also taught himself to be able to make the same presentation with his left hand. “There are times that you need to be able to present the lure with your opposite hand,” he said. “Not everyone can do that, and when they can’t, there are casting angles and lanes that get missed.”

Once he presents the lure, whether it is to the shoreline, under a dock or beneath a tree, Howell immediately engages his reel and starts the retrieve. “I kind of keep my rod tip up at about the 10 o’clock position,” he said. “I reel the lure at the speed that the bass tell me they’ll respond to, and I shake my rod tip a little to make the lure appear injured.”

His rule of thumb for retrieve speed is to think of matching the aggression of the bass. If the bass are aggressive, he reels it fast, if they are less aggressive then he slows it down. 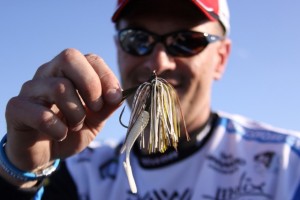 Final Tip
Howell suggested keeping a watchful eye on the jig as it comes back to the boat. “Bass usually smack this lure pretty good, but sometimes you will see bass react to it, and you won’t feel anything until it is too late.

“Believe me, you don’t want to miss strikes on this lure,” he said. “It is a great big fish bait, and when they get it, you want to get ’em in the boat because more often than not, they will help you weigh-in heavier bags.”