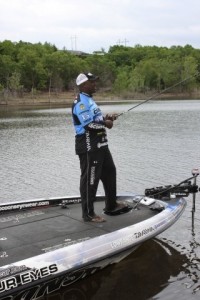 This is the equation we live by this time of the year. Bass anglers search creeks, bluff walls and channel bends looking to find the combination of everything needed to catch bass. With bass being so conditioned to chasing swimming objects as opposed to bottom bouncing objects, they can be nomadic and hard to locate consistently.

Ish Monroe, Bassmaster Elite Series pro from Hughson, Calif. has a method for finding and catching these fish, and it relies on using their own natural tendencies against them. Because bass are looking for baitfish, and because they often suspend around likely structure elements, Monroe said his favorite way to target them is to give them what they are looking for.

“I love swimbaits this time of the year,” said Monroe. “They really can produce the kind of bites I need to produce high weights and they can make for a really fun day on the water too.”

Monroe has a two step method for swimbaiting, and it depends on the depth and the mood of the fish. He used to primarily use the large swimbaits that are so popular in California; however, a relatively new tool emerged that allowed him to expand his swimbait use; the castable umbrella rig.

When to Use Each
Monroe said that he uses the umbrella rigs primarily as a search and limit bait from the fall until just prior to the spawn. “I experimented with these things when I could this past year, outside of Elite Series events,” he said. “They are extremely effective at making bass respond, especially those suspended or chasing bait.”

Monroe said that he looks for schools of fish suspended outside of creek mouths in the early fall, on channel bends as the fall progresses, and then out on the main lake again throughout the winter. “Those fish might be suspended in 30 feet of water, and the only way to catch them before was with spoons or finesse stuff,” he said. “The Umbrella Rig changed all of that. Now, I can Power fish a little more in the cold water times of the year.”

When it comes to the large swimbaits, Monroe said that he likes to use them when he is fishing lakes that are known for a healthy population of heavyweight bass. Lakes like Clear Lake, Falcon, Amistad get the approach of a big bait more so than the smaller swimbaits. “If there is decent water clarity and I’m fishing 15 feet and shallower, on a lake that is known for big fish, I throw a swimbait,” he said. “I also use it as my upgrade bait to the umbrella rigs; they can make a difference there too.” 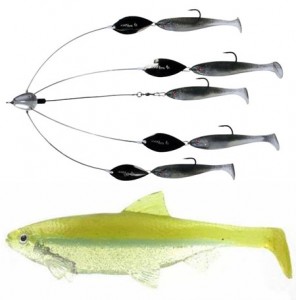 Baits and Gear
Monroe has experimented with many different versions of each of those product lines. He said that he has settled onto one or two in each category. “I really like the Jarry Rago Baits BV3D swimbaits by my friend Byron Velvick,” he said. “I do like the Huddleston occasionally when I need to slow down a lot, but mostly, its the BV3D.”

For umbrella rigs, he prefers to use the River2Sea John Murray Bumbershoot with River2Sea Rig Walkers attached. “I really like the way the Bumbershoot collapses and lets the wires store more easily, and the Rig Walkers are made for use on a rig, so they really go together.”

“You’ve gotta have the right gear to throw these all day,” said Monroe. “If you don’t, you’ll get tired extra fast, and it won’t be a fun day of fishing. at all.”

How to Retrieve
Because he uses the Bumbershoot as a search bait to try and locate fish, Monroe said that he likes to try and keep the rig above their heads initially. “Bass can be aggressive, even in cold water, and by retrieving the rig just above their heads, it can create competition amongst the school,” he said. “Once I get that school going, I can often catch multiple fish out of the same school.”

For the larger swimbait, Monroe said he slow rolls the baits over the top of the structure elements and the additional cover items on them. If there is brush or a rockpile on a break or around a channel bend, then he slowly swims the baits over the cover hoping to create an ambush strike from a large bass. 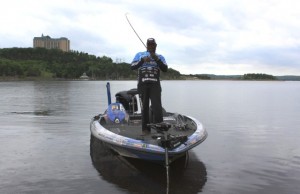 “I move the Bumbershoot fairly quickly for the most part because of the fact I’m throwing it in more open water,” he said. “But, I slow down the bigger bait and try to use the cover to try and make the big bait pop out from behind it to make them react.

“My approach at any time of the year is to go after the five biggest bass I can,” said Monroe. “I do that with my Phat Frog or when I’m Flippin’ and this approach is the same thing in the winter when the weather is cool and the water is cold. It really has become my favorite way to fish from fall until the spawn.”