There are a plethora of fish care products available on the market today for tournament anglers. Oxygen generators, livewell cooling systems and chemicals like Catch and Release and Please Release Me that make taking care of your tournament catch easier. 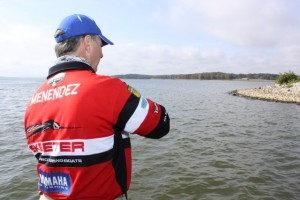 Bassmaster Elite Series pro Mark Menendez has some options for you.

“There has been a lot of investments made in quality fish care components over the years,” said Menendez, a graduate of Kentucky’s Murray State University with a degree in Fisheries Biology. “The Catch and Release movement has brought great innovations to the sport, but there are times when you might need a fallback system, and I’ve learned a few things over the years that help me take better care of my fish.”

Menendez said that his fallback system doesn’t have to cost an arm and a leg either. “I can put this in place really quickly from a local grocery store for less than 10 dollars,” he said. “I have proven these things to be things that can save the day whenever I need them, and they can help anglers out there too.”

Big Mistakes
Menendez sees anglers make two critical mistakes that cost not only a few ounces of fish care penalties at the scales, but the lives of bass as well. “The biggest two things I see that can cause problems are lack of sufficient water flow and overcooling,” he said. “Anglers try to save battery life by running their livewells on an automatic timer, and they give too much ice to the fish during a day.”

Firstly, Menendez said that anglers need to run their livewell pumps on constantly throughout a tournament day. “Turn them on and leave them on,” he said. “If you are concerned with the loss of battery power, get a bigger battery, or one of the onboard charging systems available today like the Stay ‘n Charge. but, those fish have to have constant water flow from the pumps.”

He did caution that there is one time he puts his livewells on recirculating as opposed to running fresh water through them at all times. “If I have been fishing offshore with clean river type water and I decide to go shallow looking for a kicker largemouth later in the day, I put my livewells on recirc,” he said. “When I’ve had fish in clean or relatively clean water and I go into a backwater where it’s dirtier, I may send those fish into shock, so that is my one change.”

He also suggests that anglers rethink how much they cool down the water in their livewells. “We’ve seen anglers over cool their water and put their fish in shock before,” he said. “The most you want to cool your water is two or three degrees, and that’s only to help retain more oxygen content in the water, putting bags of ice in your livewell can create too big of a difference for the fish.”

He likened that situation to jumping in a cold pool or stream on a hot day. “If it’s 100 degrees outside and you jump into a pool or stream that the water temperature is 75, your system gets shocked by it,” said Menendez. “The difference for us and the fish is this. We are warm blooded, so we adjust to it, but they are cold blooded and their body does not, so we put them in a state of shock at best; or kill them at worst.”

Menendez suggests freezing three or four 16-ounce bottles of water and keeping them in your cooler so that you can throw one in each side of the livewell a couple times a day to enhance the oxygen holding properties of warm water.” 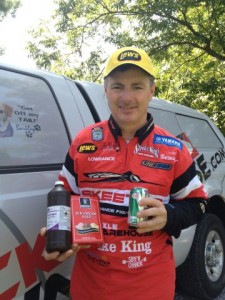 Oxygen Helper
On the topic of Oxygen, Menendez said that his chemistry classes in college taught him about covalent bonds of the chemical world, and when he realized that there was a solution that he could our in his livewell to increase oxygen content he gave it a try.

“Hydrogen Peroxide, like the three-percent bottles you can buy for a little over a dollar at your local grocery store have the scientific symbol H2O2, and when we pour it into water, it releases one bond and becomes H2O, with a free radical oxygen molecule that oxygenates the water in our livewells ,” he said. “It doesn’t take very much either, pour two or three ounces into a standard livewell and you’re adding oxygen content to the water without affecting the ph balance significantly.”

Calm Fish
Fish that are hyperactive in the livewell can cause damage to themselves and to the rest of the fish in your catch. Menendez said he learned a trick years ago while live bait fishing, that has helped him when he was without fish care additives. “We used to use cast nets to catch minnows for bait,” he said. “If they were frantic, they would kill themselves in our bait tanks. So, we used a handful of Rock Salt; like you use when making ice cream, to kind of sedate the minnows until they hit the water on a cast. The same thing happens with bass.”

While he said that the additives anglers can purchase have the additional benefit of a slime coat protectant for the bass in their mixture, the rock salt is one of their primary ingredients. “It’s a nice backup plan to help keep fish calm in your livewells when you run out of other items and can’t find it,” he said. “Just put a small handful in each side and the fish will get nice and comfortable for their boat ride.”

Bleeding Fish
Finally, Menendez said one of the dangers of fishing is accidentally hooking a gill raker or deep in the fish’s mouth or tongue which causes bleeding. We’ve all caught a really nice fish only to have it come into the boat with bright red blood running down its side from a knicked gill raker. His little trick can solve that problem.

“It happens all the time,” he said. “I’ll be on a ledge chunkin’ a big ol’ Strike King 6XD and I’ll hook a good one deep in the mouth or tongue, and it is bleeding bad,” he said. “I just give them a soda.” 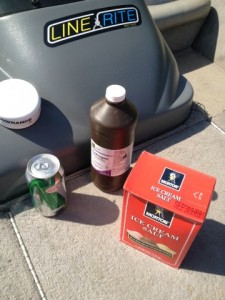 By soda, he means out of a can of a Coca Cola or Pepsi product. “I pour about 1/4 of a 12-ounce can of soda in their mouth; just give them a drink, and in a few seconds the blood starts to clot,” he said. “The carbonic acid in the soda causes the blood to coagulate and it can save a bass from bleeding too much.”

With the above, Menendez has an eight dollar batch of fish care that will carry him over for several tournament days if he has to. “The big thing is to make sure they have steady water flow, and to give them a little bit of extra care without going overboard,” he said. “Using things designed for the fish, or things that are available at a grocery store can make a big difference in your fish care procedures.”