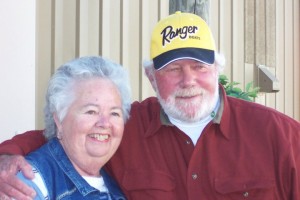 Brauer and Biffle – Flippin’, KVD – Power Fishing, Rojas – Frogs, Fritts – Cranking, Iaconelli and Swindle – Junk Fishing, Reese and Evers – Versatility, Martens and Murray – Finesse Fishing. Those are names of top professional anglers that have become associated with a specific way of fishing, or a specific technique.

When the topic of fishing finesse jigs come up, many anglers can say they’ve mastered it, but only one legendary angler can say that they put it on the map, and that man is Guido Hibdon. The legendary FLW Tour pro from Sunrise Beach, Mo. not only learned how to fish the diminutive jigs in his early years, but, he also learned how to build them, and he continues to make his own secret creations to this day.

Hibdon, who is the 1988 Bassmaster Classic champion, a two-time Bassmaster Angler of the Year and a seven-time tour level winner between the B.A.S.S. and FLW Tour organizations has earned a reputation for being a very detail oriented angler. To say “detail oriented” is a politically correct way to say that he fishes very deliberately. So methodical is he that on one Bassmaster television show in the 1990’s Peter Thliveros; who was being filmed in front of a laydown tree said, “This is the kind of place that Guido will fish for a half an hour and then all of a sudden catch a five pounder.” 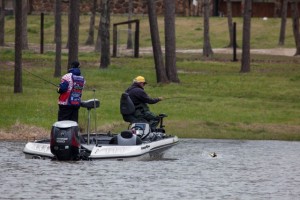 Part of that reputation comes from his ability to slow way down and fish a finesse jig. But, how does one fish jigs so light that he is forced to throw them on spinning gear? Hibdon was kind enough to share some of his techniques.

But, to understand his mastery of the technique, we’ll need to start at the beginning.

Evolution of the Finesse Jig
Hibdon said that his father is responsible for getting him started with the light jigs. “My dad used to build his own jigs when I was a kid,” he said. “He’s spend hours making them to his specifications, and I learned how to make them and fish them from him.”

What made his father’s jig so unique was his use of a two part system for making the hooks and line tie. “There were no flat eye or cross eye hooks made back then, so we had to use a worm hook in the jig, but they were straight shank with in line eyes,” he said. “My dad used a second piece of wire to create the line tie so that it was turned flat with the shape of the jig. He was the first one I knew making them like that. Others in the region made some like it later, but Dad was the first.”

Hibdon also said that the early versions were made with feathers for the skirting material, then graduated to living rubber and finally the modern silicone that most jig skirts are made with today. “We’ll still make some on our own to fish with today, along with some custom colored Guido Bugs occasionally,” he said. “But, while some of the materials have changed the approach to fishing them is basically the same.” 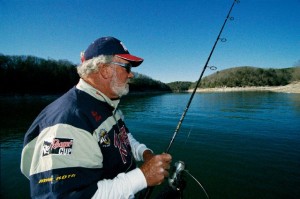 Finesse Jig Gear
Because he tends to throw his 1/8-ounce tipped with a Baby Guido Bug model most frequently, Hibdon said that he has started to throw them on spinning gear. “My dad threw them on casting gear with six and eight pound line,” he said. “But, I went to spinning gear and a braided main line with a fluorocarbon leader a few years ago. It makes casting easier and working the lure as well.”

He said he uses his 1/8-ounce model a lot, but will go up to his 1/4-ounce model when the conditions warrant. “If there’s a lot of current, or the winds are pretty high, I go up in size,” he said. “The reason I go so light is because there’s not a lot of anglers who will go so light, so I feel like I have an advantage.”

He likes to match the jig and Guido Bug trailer to the crawdads that are prevalent in the lake. “I’ve caught fish on these things from Canada to Florida and everywhere in between,” he said. “What I’ve found is that matching the color of the lure to the color of the crawdads in a lake get me more bites.” 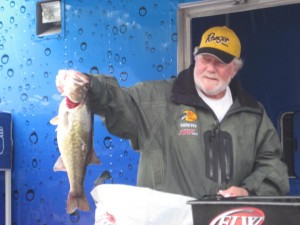 Outside of that, he tends to choose colors based on the sky conditions and water color. Our jigs and Guido Bugs are always pretty,” he said. “They might have a few different colors in them, but, I use lighter jigs in clearer water and darker or brighter ones in darker water; it’s all a matter of feel when you get on the water.”

Retrieves
Hibdon said that he doesn’t have any one specific retrieve that he uses all of the time. He tries to match his retrieve to the type of cover he is fishing. “If I am fishing brush, I try to slowly crawl that jig through and over all of the limbs,” he said. “That is when I beef up my leader to 15-pound-test, and I still don’t set the hook very hard, but try to put pressure on them and lead them out of the cover.”

In rocks, he tries to slowly crawl the jig over each rock in his way, allowing the lure to fall on the backside slowly as it leaves the rock. “It’s not real hard to fish rocks,” he said. “It’s all about the shade. In the morning they’ll be on the shade on one side of the rock, and on the other in the afternoon, I just slowly fish it through the shade.”

He’ll even fish the finesse jig in rivers, both tidal and natural and instead of focusing on the retrieve, he focuses on the presentation. “You have to throw your jig up current of your target,” he said. “Those bass are sitting with their nose facing into the current, so you make presentations upstream f your target until you figure out the one that they will bite. If that takes 50 casts, so be it, but you just have to use your best judgment and make the right casts.”

Final Tips
He said that despite the fact that he is regarded as the one who brought this technique to the forefront, he knows other anglers can make them work for themselves too. “This lure is a fish catchin’ son of a gun,” he said. “I feel best when I have that rod in my hands, and that jig is wet. If I have the patience to keep fishing it, I know I will eventually get the bites.

“Other anglers can too,” he said. “They just need to have the right tools, put the lure in the right places and have the patience to let the lure do what my dad designed it to do so many years ago; fish it slow and steady, and they can catch fish that others can’t.”

Finesse Jigs like this one can trace their roots back to Guido Hibdon’s Father’s original design with a two part hook. These and Hibdon’s Guido Bug still produce great results.